Times are tough, and scammers know it. So some of them are adopting a new business model for an old rip-off, raking in the cash with bogus lotteries and sweepstakes. 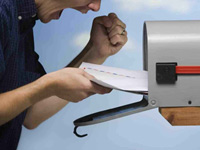 Have a look at our Scam Alert archive for past warnings about the con artists who too often seek to part Americans with their hard-earned money.

As always, the bait in these swindles, which are overwhelmingly targeting older Americans, is the promise of a huge cash windfall or choice merchandise because you have "won" a drawing. But to collect, you're told, you first must pay insurance, taxes or other so-called fees. The money you send is gone forever. The reality is the prize itself never existed.

What has changed is the amount of the upfront fees. Scammers used to ask people for hundreds or thousands of dollars. Fewer than 1 percent actually sent the money.

But in these hard times, scammers realize that not many people have lots of cash lying around. "And they know that more people have gotten wise to scams where you have to pay thousands of dollars," says Roger Nusbaum, a fraud detective at the Tucson, Ariz., Police Department.

So they're lowering the "fees," hoping they will get a bigger response. So far, the new strategy seems to be working.

In one recent phony sweepstakes, letters addressed to older Americans — the scammers had purchased mailing lists that revealed people's ages — claimed that lucky recipients had won a new Toyota Corolla or its cash equivalent of $15,503. The so-called evidence was laughable: a crude black-and-white photocopy of a supposed transfer of title, lacking any appearance of authenticity that you'd find in a real DMV document.

Guess how many older Americans fell into the trap? >>

And yet in just a few weeks before this ruse was shut down by the U.S. Postal Inspection Service, at least 4,000 older people nationwide took the bait — about 10 percent of recipients — mailing back a $39.95 "fee" to claim the nonexistent cars or cash. In the legitimate direct-mail business, "a 5 percent response rate is considered very good," says the agency's Patricia Armstrong. Some people even paid $20 extra for supposed overnight delivery of their checks.

"Victims are being snookered in by the low dollar amount," she tells the AARP Bulletin. "They may suspect it's a scam, but figure, 'It's only $40. I spend that on coffee.' But that just makes some bad guys very rich, because so many other people are thinking the same thing."

So here's the real deal: