You may not know Kelly Richards, but you may have read about her success. According to a website calling itself News Daily 7, she makes $7,487 a month working part-time from her home — which may be right near yours.

Their rags-to-riches tales are touted on computer pages that in design and name seem like they're the online faces of news organizations — in addition to News Daily 7, there's News1Report and InternetNews8.

Often the sites tell us that a skeptical reporter has conducted an investigation into a particular product and found that it's … fabulously profitable!

Here's the real news: These are not real customers, news hounds or news organizations. Despite the presence of the logos of the likes of MSNBC and USA Today, the sites are advertorials hawking work-at-home kits. And you're never told on them what the kits contain, just that they can open the door to big money. At similar sites or in unsolicited emails, the same kinds of pitches are made for fad diets and other Internet-promoted products.

"Almost everything about these sites is fake," David Vladeck, director of the FTC's Bureau of Consumer Protection, said in a statement. "The weight loss results, the so-called investigations, the reporters, the consumer testimonials, and the attempt to portray an objective, journalistic endeavor."

According to the commission, the sites bilked consumers out of more than $10 million. Acai berry pills sold this way, for instance, were claimed to prompt weight loss of 25 pounds within four weeks.

The FTC alleges that some marketers also use fake blogs in which "ordinary, everyday consumers" detail their success with the product. Those blogs are, in fact, fabrications, the commission says.

FTC official Charles Harwood added that the commission will continue to "look at" marketers that set up fake news websites for other products — including work-at-home kits and penny auctions. Acai weight loss products were the initial focus, he said, "because they are so prevalent on the Internet" via fake news websites.

According to the FTC, the sites earn a commission when consumers "click through" to read the phony news reports and are directed to ordering pages operating by the merchants selling the items.

The commission posted a consumer alert about the acai sites.

In the meantime, here's how you can spot the sites for what they are yourself.

Study the screen of these pages carefully and you may see the word "advertisement" at the top.

Read the fine print way down at the bottom. Here's what you'll see: "We are not affiliated in any way with any news organization." "All photos/images on this site are stock photography." "This website, and any page on the website, is based loosely off a true story, but has been modified in multiple ways including, but not limited to: the story, the photos, and the comments. Thus, this advertisement, and any page on this website, are not to be taken literally or as a non-fiction story."

According to the FTC, one defendant who had some 40 websites selling acai berry products used her photograph on at least two, under the names of reporters Julia Miller and Monica Weissenbaum. On other fake news sites, Theuriau's photograph has appeared under the names of Stacie Sandler and Amy Connor. 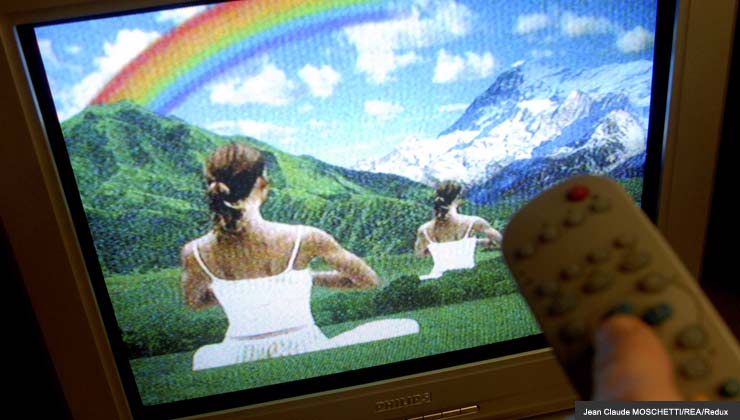 To create the illusion of a local connection, the hometown of customer Kelly Richards can change depending on your computer's add ress on the Internet.

Is marketing through fake news venues a reputable way to do business?

In an email, Scam Alert asked this and other questions to Ryan Tewis, who, with his wife, promotes several work-at-home offerings in this way. According to the Better Business Bureau, they include Automatic Profit System, which the bureau has given an "F" rating, citing 57 complaints.

According to the BBB, Online Revenue Solution is also known as Automatic Profit System. And Home Revenue System, with Angela Tewis listed by the BBB as the primary contact, gets another "F" rating.

Scam Alert heard back from Derek R. Young, who said he was representing a company called Yolo Marketing. "Our testimonials are real," he wrote. "We do not make up our success stories."

"In the past, when we used the real names and locations of our customers," Young wrote, "some of those customers were contacted directly by the general public. Consequently, we now change the identities of our customers in our advertising in order to protect their identities from the consuming public."

He called the BBB's "F" rating "skewed," saying it doesn't "take into consideration the size of the company or whether the complaints were generated by knockoff sites using our address in their spam."

Concerning the lack of information about what the product being sold consists of, Young said that "revealing to our competitors and the general public the details of our methods and content would eliminate any value to our purchasing customers."

That's his explanation. But Scam Alert suggests you heed the following from the AARP Bulletin, a legitimate news venue: Don't believe everything you read.

Sid Kirchheimer is the author of Scam-Proof Your Life, published by AARP Books/Sterling. Have a look at our Scam Alert archive for past warnings about the con artists who too often seek to part Americans from their hard-earned money. If you don’t find your answer there, send a query.