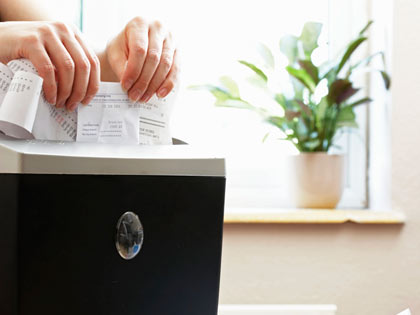 During tough economic times, thieves are even more anxious to separate people from their hard-earned cash and will use any number of scams to do so.

But the greatest tool in preventing identity theft is – well, you. That was the message conveyed by AARP New Mexico Volunteers Jackie Cooper and Bill Morrison during a presentation at the Lt. Governor’s Financial Summit, held in April in Albuquerque.

“People are desperate. People are trying to make money the easy way. You are your own best police person,” Cooper said.

One of the best ways people can protect themselves is fairly new to New Mexicans and that is implementing a security freeze.

A security freeze, which is placed on your account through the three credit reporting agencies, prevents anyone from opening a new account, such as financing a product, opening a bank account or new credit card, under a person’s name without that individual’s direct authorization. It does not affect existing accounts, Morrison said.

He told the audience a story of a relative who was contacted by a lending institution to verify some information on a loan. The relative had no idea that someone had listed him as a partner in a business and was now taking out a loan in his name.

“If it wasn’t for that typo he would’ve been in a lot of trouble and even so clearing up his name still cost him in travel and time,” Morrison said.

To implement a security freeze, a letter needs to be sent to each of the three credit reporting agencies: Equifax, Experían, and TransUnion. The letter should include your social security number, date of birth, a copy of a government issued ID, and a proof of residency, such as a copy of a utility bill.

If you are age 65 or over, or have already been a victim of identity theft, there is no cost for the freeze. If not, be sure to include with each letter a check or money order. There is a fee of $10 to implement the freeze, payable to each reporting agency. There is a cost of $5 to unfreeze an account.

But protecting yourself can be done by taking just a few simple steps on a regular basis.

“One of the most important things you can do is buy a shredder,” Cooper said.

She advises that people shred any documents that contain any kind of personal information including home addresses rather than just throwing them in the trash.

•    Cleaning out your car and wallet on a regular basis so you don’t leave important information, such as bank statements and receipts, inadvertently lying around.
•    Don’t mail checks from home or leave them lying in a community box overnight – drop them off at the Post Office.
•    Arrange for direct deposit of checks and automatic payment of regular bills.
•    Store personal records in a safe place.
•    Opt-out of unsolicited credit card offers.
•    Never give out personal information to strangers. Most banks and other institutions you do business with will not telephone you and ask you for personal information, account numbers or your Social Security number. Never “verify” your information for someone claiming to be from a business unless you initiated the call yourself.