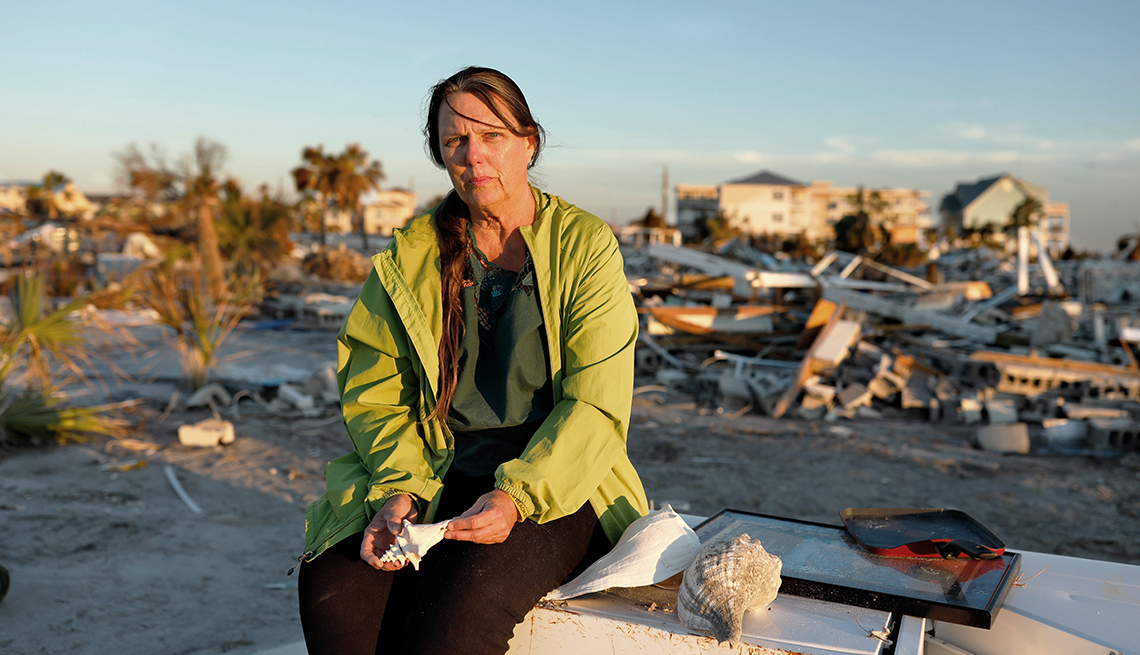 This past summer, Teresa Secrest left Orange County, Calif., to move into a small beach cottage in Mexico Beach, Fla., that she had inherited from her father. Like many Americans, she considered life on the beach a retirement paradise; even better, the home’s mortgage was paid off, so living would be cheap. Secrest, a 58-year-old cancer survivor, tidied up the yard, did some repairs and went to sleep listening to the waves crash on the sugar-white sand 300 feet from her door.

Then in October, Hurricane Michael arrived. Secrest evacuated to a place of safety. Days later, she returned to discover the worst: Her home was gone, reduced to a pile of rubble that was still wet from the storm surge. “My only plan right now is, how do I clean up my property?” Secrest said after viewing the wreckage. “That’s step one. Step two is ... I don’t really know step two.”

Secrest doesn’t think she will be able to rebuild. She did not have an insurance policy through the federal National Flood Insurance Program (NFIP), which provides coverage to more than 5 million homeowners, condo associations and businesses.

The NFIP, which covers up to $250,000 for the building itself and $100,000 in personal property for single-family dwellings, has been a lifesaver for many in coastal communities devastated by floodwaters. But older Americans may be less likely to be covered through the program, according to experts. That’s because they are more likely than younger people to have paid off their mortgage, releasing them from any obligation to buy the coverage. And devastating storms often strike just where older residents have clustered. A damaged bedroom in Parker, Fla., in October 2018 after Hurricane Michael.

Flood insurance is required for homeowners in areas the Federal Emergency Management Agency (FEMA) has determined are at the highest risk for flooding — but only for those with a federally backed mortgage. Otherwise flood insurance is not necessarily required. Mexico Beach, like many other Florida coastal communities, has long been a destination for retirees. Its median age is 58, much higher than the national median age of 37.7, according to census data. Experts believe those older residents were hit hard by Hurricane Michael.

For financial news, ways to save and more, get AARP’s monthly Money newsletter.

Many homeowners mistakenly believe flooding is covered by a standard homeowners policy, notes Chris Heidrick, owner of Heidrick & Co. Insurance and Risk Management Services in Sanibel, Fla. Others drop their flood insurance soon after their home is paid off because their area hasn’t flooded before. That’s risky. “If you can’t afford to rebuild your house out of savings, you really ought to have flood insurance,” he says.

But for many retirees, even subsidized federal policies at cut rates can be expensive. Rates in the highest-risk areas can be $2,500 a year or more, Heidrick says, compared with around $450 a year outside these areas. Many people who live outside the highest-risk areas believe they don’t need flood insurance because FEMA maps show they are at a low risk, Heidrick adds. Then the storm arrives. Fewer than 10 percent of households in the Carolinas affected by Hurricane Florence in September are likely to have had federal flood insurance, according to Milliman, an actuarial company. A Washington Post analysis of FEMA data found only 17 percent of homeowners had flood insurance in the Texas areas hit hard by Hurricane Harvey in 2017.

Starting over will be particularly difficult for older Americans, Heidrick says: “There is less time to rebound.”

Rick Moore, a 58-year-old civil engineer from Tallahassee, Fla., was lucky. He pays about $1,000 a year for flood insurance on his four-bedroom beach house in Mexico Beach, which was built on pilings to allow floodwaters to sweep beneath. Moore says he’s not sure he would have kept the pricey insurance if he had paid off his mortgage. The hurricane completely destroyed Moore’s house, but he’s already planning to rebuild. “It may be a speed bump, but we are looking forward to retiring there,” Moore says.

The NFIP has worked for people like Moore, but the program is on life support, overburdened by payouts from several major storms that brought extreme damage. It has left taxpayers on the hook for billions of dollars.

“It’s a program that should be a linchpin in the nation’s strategy to address escalating flood risks and the problem of sea level rise,” says Robert Moore, a flood insurance expert at the Natural Resources Defense Council (NRDC). “But in its current state, it’s a liability.” 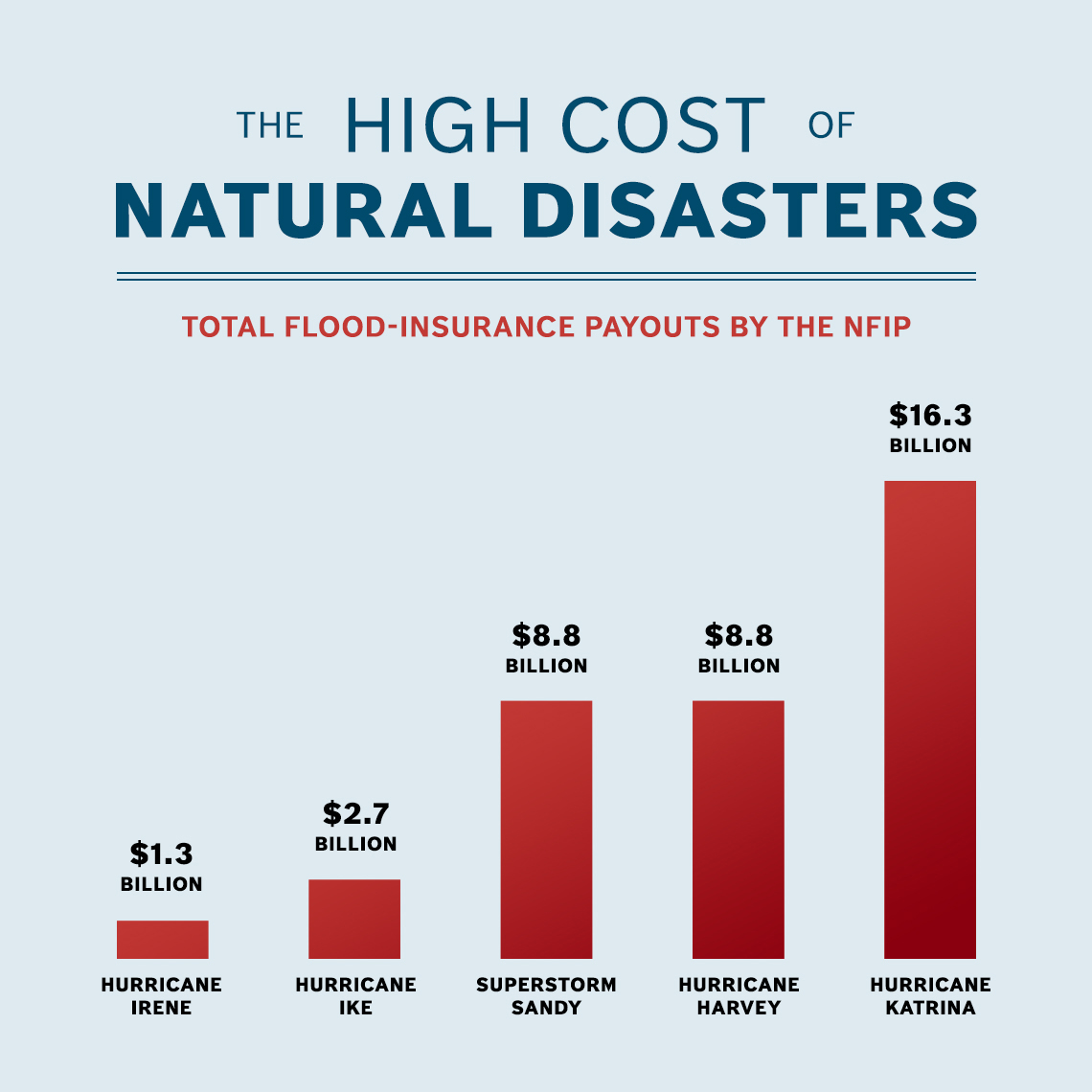 Before Hurricane Michael, the program was more than $20 billion in debt, NRDC's Moore says, and that’s after Congress authorized $120 billion in disaster relief funding in 2017 and canceled $16 billion in outstanding NFIP debt. And the benefits are not spread out among policyholders. For at least 36,000 homes and businesses, the program has paid flood damage benefits more than once, according to FEMA data.

Critics say the repeat payouts encourage homeowners to rebuild their homes in areas at high risk for floods, which leads to a cycle of additional claims. The process has led to stunning levels of government waste. In one case, a home in Spring, Texas, was repaired 19 times at a cost of more than $900,000, according to the New York Times. The house was valued at $42,000.

A call for change

The problems facing the NFIP have led environmentalists, insurance executives and  fiscal conservatives to push for change. So far, Congress hasn’t responded. In 2017, the U.S. House of Representatives passed a reform bill with a number of provisions to encourage private flood insurers to enter the market. The bill also includes rules to improve flood-risk maps and force disclosure of past flood claims to home purchasers. The Senate has not taken up the bill. “I wish I could say that Congress is motivated to help people and find a fix to a problem everyone knows exists,” says Moore at the NRDC. “But I haven’t seen anyone in the Senate step up.”

Joe Eaton has written for the Washington Post and the websites of National Geographic and The Atlantic. 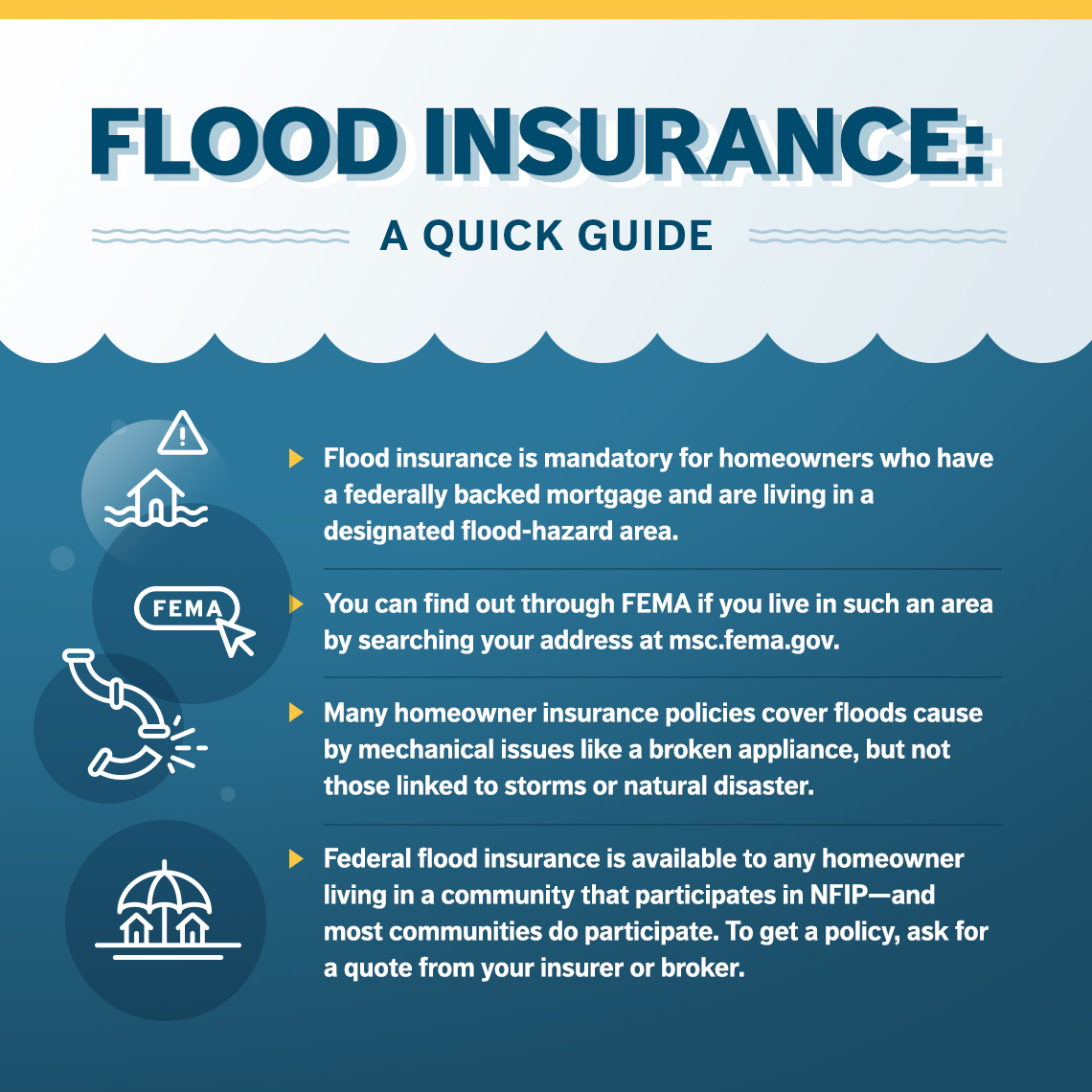