En español | Many college students face their most arduous test after graduation, when it's time to address student loan debt of tens, and sometimes hundreds, of thousands of dollars. 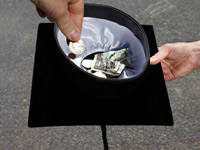 Fortunately, there are things that savvy friends and family members can do to help newly minted grads in an era where student loan debt has surpassed credit card debt for the first time, according to financial aid expert Mark Kantrowitz.

The smartest strategy is to focus on loans with the highest interest rates, not the largest outstanding balance, says Kantrowitz, publisher of financial aid websites Fastweb.com and Finaid.org.

Anyone helping a student whittle down an educational loan should "wait until after the student graduates, because you don't want to reduce eligibility for need-based financial aid," says Kantrowitz, who's heard of medical students owing as much as half a million dollars.

In August, a national study conducted by the student loan giant Sallie Mae and polling firm Gallup indicated that 14 percent of college costs are supported by student borrowing. The largest percentage of the expenses, 37 percent, comes from parent income and savings, with parent borrowing accounting for an additional 10 percent.

But friends and relatives, the study found, foot a full 7 percent of the bill (the rest comes from scholarships and the students' own income and savings).

People pitching in to retire student loan debt need to be mindful of an IRS gift threshold, Maryland CPA Gary Stacharowski cautions: "As long as they stay within the $13,000 per individual per year gift rule, taxes aren't a problem." If the gift is higher than that, the recipient may be liable for income taxes.

Volunteer-minded individuals can take advantage of programs such as the Edward M. Kennedy Serve America Act, which gives $1,000 educational awards to people 55 or older who perform at least 350 volunteer hours annually, Kantrowitz says. The award can be transferred to a child, foster child or grandchild.

Many people, however, may want a simpler method. To that end, some creative solutions have emerged in recent years.

Illinois mom Jennifer Taylor was shocked to discover that her daughter Lily, a sophomore at the University of Iowa, could face as much as $20,000 in student loan debt after graduation.

"When I showed her the numbers she could be responsible for, she was horrified" too, says Taylor, 54. Necessity again proved to be the mother of invention, and Lily's List was born.

It's a website designed to make it easy for loan-reducing donations to flow. An indebted student or graduate registers at Lilyslist.com, paying a $15 annual fee. Helpful friends and family members can then make donations at the site, which channels the money directly to the student's loan account. Donors are charged a $2.75 transaction fee for each use.

Lily's List sends students e-mail notices when gifts are made on their behalf, says Taylor, who's working with three other mothers to hone and perfect the site. One of the advantages of the program, she says, is that the donor's gift goes toward reducing a student's debt, not to fund a purchase of an iPhone, latte or anything else.

"It's a very heavy thing for these young people to be facing at a young age," says one of Taylor's associates, Beverly Gibson, 54, whose two children will be college-bound in a few years. Lily's List interests Boston University business management major Severine Cukierman, 19, who estimates she'll be facing $20,000 in student loan debt after graduation. "I definitely want to look at anything that will help reduce my load," Cukierman says.

Upromise.com wrings debt pay-down from everyday purchases such as groceries, gasoline and clothing. Owned by Sallie Mae, the site has more than 750 participating merchants that designate anywhere from 1 percent to 25 percent of the price of things you buy from them toward a student's educational loans.

"Family and friends can participate on behalf of any beneficiary they choose," Upromise spokeswoman Debby Hohler says. "Every time they book a flight, rent a car, go out to dinner, book a hotel, they can be getting money back that can be used to help pay for college."

Upromise has 12 million members and has funneled roughly $600 million toward student debt since 2001, Hohler says.