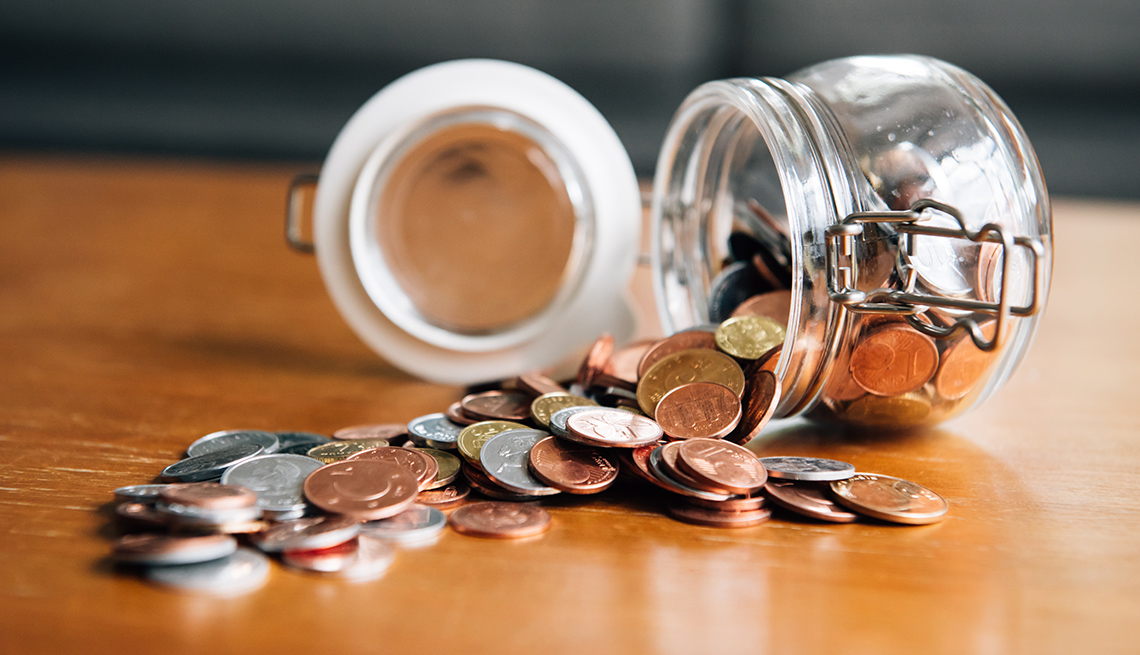 En español | Flour and toilet paper may be back on store shelves, but now shoppers across the U.S. are encountering another coronavirus-related shortage — an unexpected dearth of coins in circulation, making it difficult for clerks to provide change after cash purchases.

With the pandemic slowing production at the U.S. Mint and keeping consumers, and their coins, at home throughout the spring, stores are finding themselves strapped for quarters, dimes, nickels and pennies and taking unusual measures to avoid parting with them.

Major retailers like Walmart, 7-Eleven and Lowe's are asking customers to pay with plastic or use exact change whenever possible. Other stores are offering to load shoppers’ change onto loyalty cards or convert it into charitable contributions. Some have even asked customers to bring in coins they've accumulated at home and trade it for cash or a gift card.

"We haven't not given change yet,” says Kent Couch, owner of the Stop and Go Mini Mart and Shell station in Bend, Oregon. “We've managed to survive so far, but we don't know how much longer."

Couch's busy store, which does about 3,000 customer transactions a day, normally gets $700 worth of change from the local bank every week. But now, due to the shortage, he has to make a single roll of coins for each denomination last every day from Monday through Friday, which works out to $87.50 a week.

Convenience stores have been particularly hard hit. About 40 percent of the 130 million in-store transactions they conduct each day are in cash, according to Jeff Lenard, vice president of strategic industry initiatives at the National Association of Convenience Stores.

Wawa, Pilot, QuikTrip and Speedway are among chains offering store credit or asking customers to round up bills for charity to limit change return, the association says. Some 7-Eleven stores are offering a free Slurpee to people who bring $5 in coins to trade for cash, the company said in an email statement.

"It was something that came along without warning,” Lenard says of the shortage. “We have heard from retailers who are saying that some of their stores are completely out of coins and others are within a day's supply."

It's not that there are suddenly fewer coins. There were an estimated $47.8 billion worth of coins in the national money supply in April, according to U.S. Mint spokesman Michael White. That's up from $47.4 billion in coins a year earlier.

The biggest problem is that not enough coins are in circulation. They normally cycle through the U.S. economy, going from stores’ cash drawers into the pockets and purses of consumers, who in turn spend them, take them to local banks or trade them for paper currency or gift cards at supermarket coin machines.

Those coins eventually make their way back to the Federal Reserve, which repackages them in rolls for commercial banks to distribute to store operators, explains Daniel Soques, an assistant professor of economics at the University of North Carolina Wilmington who specializes in monetary policy and has studied currency shortages.

But when stores shut down and consumers started staying home this spring as COVID-19 spread, the recycling of coins slowed as well. At the same time, the Mint was taking measures to protect its workers from the coronavirus, which slowed production of new coins by 10 percent in April and 20 percent in May, White says.

"That's when the perfect storm came about,” Soques says. “You had customers not reintroducing coins into the economy, and the Mint not producing enough of them."

Production up, but shortage persists

But with a lot of the nation's spare change still languishing on people's dressers, the Fed has had to ration its dwindling supply, putting stores in a bind as consumer activity ramps up.

"We are providing coins to our change-order clients based on the amount of coins we have available,” says Cynthia Montgomery, director of communications for the retail community bank division at Truist Bank. “With each change order most clients receive some coins, but we are monitoring amounts to ensure we have availability for all clients."

The Fed has established a task force of bankers, retailers and others to search for solutions. And the Mint is urging people to use exact change when they can and take other steps to get coins back into circulation.

"For millions of Americans, cash is the only form of payment and cash transactions rely on coins to make change," the Mint said in a July 23 statement. "We ask that the American public start spending their coins, depositing them, or exchanging them for currency at financial institutions or taking them to a coin redemption kiosk.”

In the meantime, retailers are taking steps to husband their coin stocks.

Walmart is converting some self-checkout registers to card-only stations and asking those who need to pay with cash to use correct change, a company spokesperson says.

At Kroger supermarkets, cash customers are offered the option of having their change loaded onto a store loyalty card or rounding up the amount and converting it into a donation to Zero Hunger | Zero Waste, a company charity program that works to curb hunger and food waste in communities the chain serves.

Those who want coins for change can still get them in checkout lanes that have them. "Like many retailers and businesses, we are adjusting to the temporary shortage in several ways while still accepting cash,” a Kroger spokesperson says.

QuikTrip, which has 840 locations in 11 states, offers several options, including putting a special code on receipts that allows customers to apply their change to future purchases. To help replenish their supply, QuikTrip outlets have also asked patrons to bring in their change jars and redeem the coin collections for cash or gift cards.

"We had one gentleman in Wichita [Kansas] who brought in $3,000 worth of coins,” company spokesperson Mike Thornbrugh says.

In Oregon, convenience-store owner Couch has resorted to posting ads on Twitter and Facebook, asking customers to bring in their coins, for which he'll pay $1.05 on the dollar. He's also tried getting them to round up their purchases and donate the change to Habitat for Humanity. He's even received help from a competing store that agreed to let him order coins from its bank, which has a better supply than his does.

He's resisting the last-ditch measure of rounding his prices to the nearest dollar. “A candy bar is $1.49,” Couch says. “If you would bring it up to $2, you'll chase away people. But if you take it down to $1, you'll lose money.”

More on Budgeting and Saving