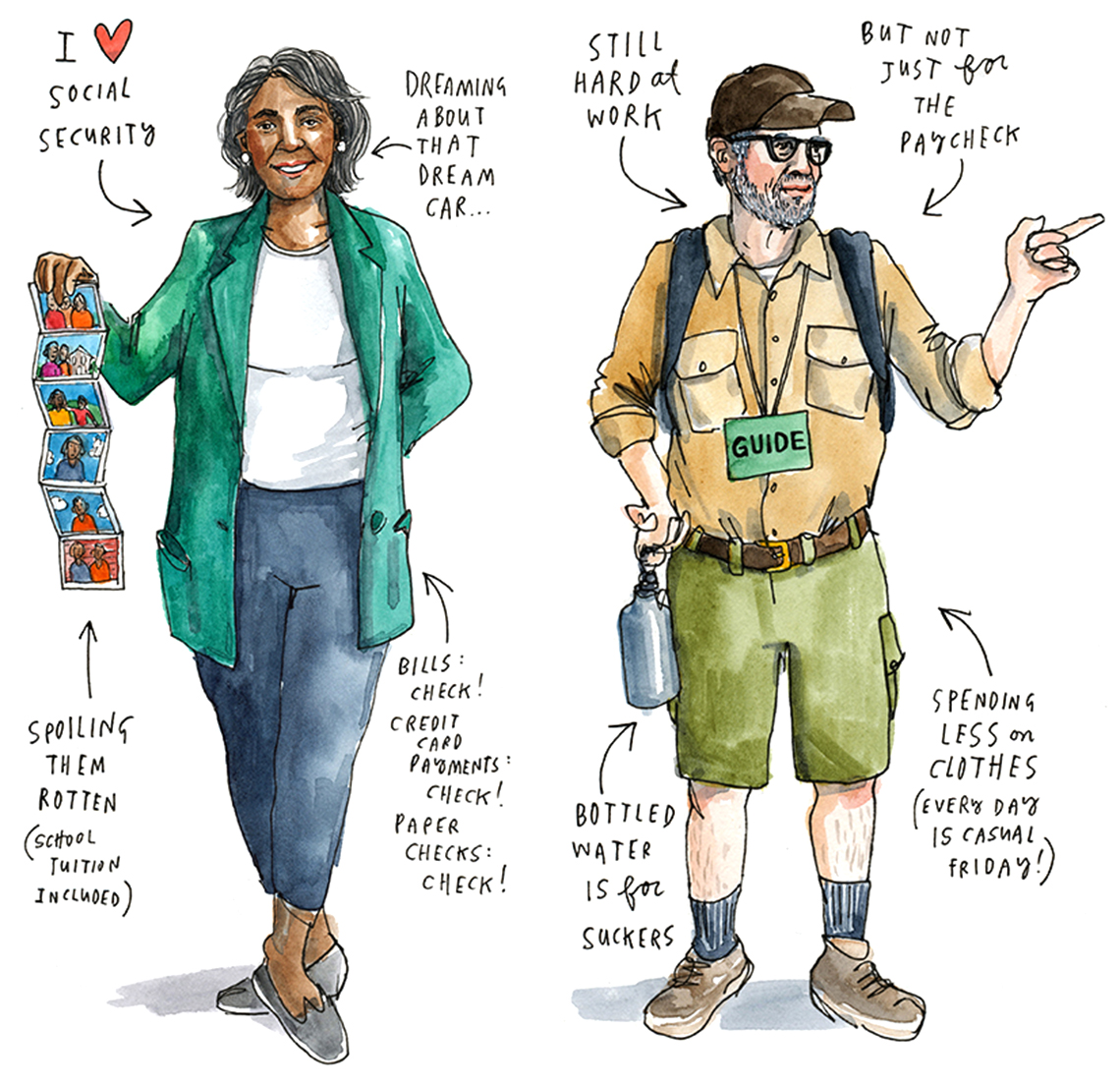 THE LOWDOWN: Many of you are financially ready and able to retire, but work still beckons. Plus, it's time to hire a lawn service — and haircuts (for men) have unaccountably become much cheaper.

You may have a net worth of $597,000 or more … About half of you with retirement savings have also paid off your mortgage and have some $148,000 socked away in retirement accounts. That's enough to provide you with $649 a month in spending money to supplement your Social Security check. A thrifty 1 in 5 in their early 70s have more than $500,000 squirreled away; those in the top 10 percent have over $1 million.

… likely have a pension … More than half of retirees in their late 70s have one.

… depend on Social Security … People who are 75-plus count on Uncle Sam's retirement plan for 61 percent of their total income, compared with 31 to 57 percent among those in their early 70s.

… and have crossed the "freedom threshold." By 70, 65 percent of you can live wherever you want — no longer constrained by family obligations or the need to be close to a long-held job, one financial report showed. Even if you don't move, there's a 72 percent chance you've gained financial freedom by paying off your mortgage.

You pay bills the way you always have … People in their 70s, more than any other age group, are likely to pay their bills by writing checks; 77 percent write checks, versus 55 percent of people who are in their 40s.

… do your banking at the bank … Just 2 percent of people in their 70s do their banking by clicking on a mobile app, according to a Federal Reserve System report.

… stay on top of your bills … Sixty-eight percent of those in their 70s pay off their credit card balances in full each month.

… and may start spoiling those grandchildren and great-grandchildren soon. After decades of sharp declines, spending on toys, games and tricycles bounces upward for people entering their 80s. Those in their late 70s suddenly spend more on elementary and high school tuition.

But you could be struggling instead ... Fifty-two percent of people in their early 70s have no retirement savings — and half of this group have no pension either — a big reason that 1 in 8 are still working.

... many of you still go to work … A notable 18 percent of 70- to 74-year-olds and 12 percent of 75- to 80-year-olds are wage earners, at least part time, the Minnesota Population Center/IPUMS found. If you have an undergraduate or advanced degree, the likelihood you're still in the workforce jumps to 28 percent at age 70 and to 22 percent at 73.

… and you don't just punch the clock for the money. The paycheck is welcome, but you're equally interested in the other benefits. People who plan to work past age 67 told economists from the Center for Retirement Research at Boston College that they're also interested in personal growth, meaningful relationships and passing on knowledge.

You don't waste money on bottled water. Just 15 percent of people 71 and older plunked down their hard-earned cash for bottled water, a 2012 study showed, compared with 30 percent of adults in their 30s and 40s.

You spend one-third as much on haircuts as you did in your 50s (if you're a man). Women's hair care costs the same. Meanwhile, men also spend less than half as much on pants, shirts, jackets, dry cleaning and, uh, underwear in their 70s as they did earlier in life, according to an analysis of U.S. Census data.

You may get a new ride. New-car spending falls sharply for people in their 60s, then evens out in the 70s — perhaps a sign that cars bought before retirement are ready to be replaced now. Meanwhile, 70-somethings spend more than any other age group on repairs of household appliances.

You need help with the grass. People in their 70s spend 60 percent more on yard-care services than they did in previous decades, economic-forecasting firm HS Dent, in an analysis of census data, concluded.

Find Ways to Fit Big Dreams Into Your Retirement

Lavish trips. Fancy home renovations. Extraordinary dining experiences. The first 10 to 15 years of retirement can be a time to realize dreams — or blow your budget. "Miscalculations could leave you short in your 80s or 90s," says Steve Vernon, a research scholar in the Stanford Center on Longevity's Financial Security Division. Here's how to avoid that.

Watch the bottom line. One study showed that 46 percent of households spent more in the first years of retirement than when couples were working. Beware of new mortgages, furniture and other home extras.

Pay yourself a salary. "Give yourself a monthly paycheck you can sustain into your 90s, based on your investments and income from Social Security and pensions," Vernon says. "Also, set aside money for big expenses such as a future nursing home stay." The money you don't spend each month is for fun.