Health: What to Expect in Your 70s and Beyond

Plus, activities you can do at home to keep your mind sharp 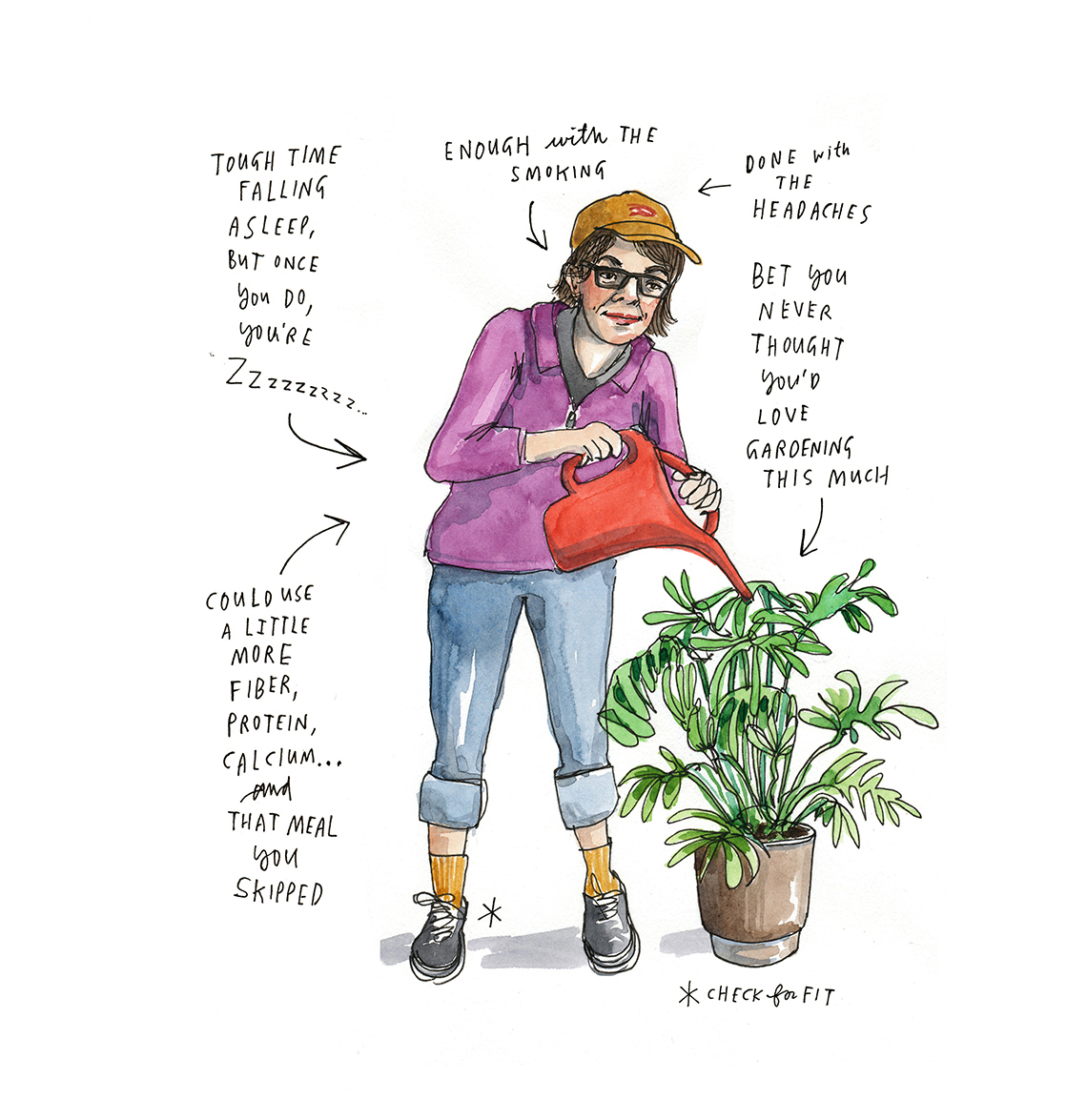 THE LOWDOWN: You drink and eat less, garden more, are very big into various pills — and may well be wearing the wrong shoes. You also tend to smoke less, have fewer migraines and sleep fitfully.

… love gardening for the exercise and health bonuses … Forty-five percent of men and more than 1 in 3 women in their 70s garden, and they eat more fruit and vegetables and get more exercise than nongardeners.

… though are on the fence about formal exercise. About 50 percent of 70-somethings exercise for at least half an hour three times a week.

… don't get thirsty like you used to … People in their 70s sip less than four cups of plain water a day; women and men need about seven glasses daily.

… and may be a meal skipper. About 30 percent of 70-somethings eat just two meals a day. That could increase your risk for obesity and metabolic glitches that can lead to diabetes and heart disease, notes the American Heart Association.

You are less likely to smoke than younger adults … More than 8 percent of 70-somethings smoke tobacco — compared with 17 percent of people in their 50s and early 60s, the Centers for Disease Control and Prevention reports.

You lead the nation in supplement use … Sixty-six percent of men and 75 percent of women in their 70s report taking dietary supplements; about half opt for a multivitamin. Beware of taking too much iron, which could increase the risk for heart disease, cancer and type 2 diabetes for some people.

... and most take at least one Rx drug … Eight in 10 of you do; 40 percent take four or more — primarily for high cholesterol, high blood pressure, reflux disease, diabetes and pain.

… yet may skip needed meds for budgetary reasons. Up to 15 percent of people in their 70s cut back on prescription drugs because of high costs.

You are still having fun between the sheets, despite challenges. Up to 77 percent of men in their 70s have erectile dysfunction (ED), and up to 33 percent of women report that sex isn't comfortable due to vaginal dryness and itching. No wonder doctors wrote 14.6 million prescriptions for two leading ED drugs last year, and sales of vaginal lubricants have risen to some $219 million.

You get 9.2 hours of sleep per night. But 50 percent of older people have trouble falling or staying asleep, because of age-related hormone changes and sleep-robbing health problems.

You may be wearing the wrong shoes. A study of retired military personnel, in their 50s through late 70s, showed that 3 out of 4 wore the wrong-size shoes. Get your dogs measured. The right shoes can help you maintain your balance and, if you have diabetes, help you sidestep foot injuries.

Preserving memory is the top aging concern for 35 percent of older Americans, according to a survey by the National Council on Aging. Now studies show that activities you do at home can "help prevent mild cognitive impairment [MCI] — the early, small losses of memory and thinking skills that can lead to dementia," says Yonas E. Geda, M.D., a professor of neurology and psychiatry at the Mayo Clinic in Scottsdale, Arizona, who researches memory and aging. Try these.

Do what you love. Quilting? Woodworking? Chess? People in their 70s who devoted time once or twice a week to everyday fun pursuits such as these were up to 30 percent less likely to develop MCI.

Believe in yourself. Exposure to negative stereotypes about aging made some older people perform 20 percent worse on memory tests.

Take a stroll after dinner. When they checked the exercise habits and memory status of 1,324 people in their 70s and 80s, Geda's team found that those who got any amount of light or moderate physical activity were 32 percent less likely to develop MCI.

Self: What to Expect in Your 70s and Beyond

Plus, laughter really is the best medicine

Wealth: What to Expect in Your 70s and Beyond

Plus, how to realize your dreams without blowing your budget