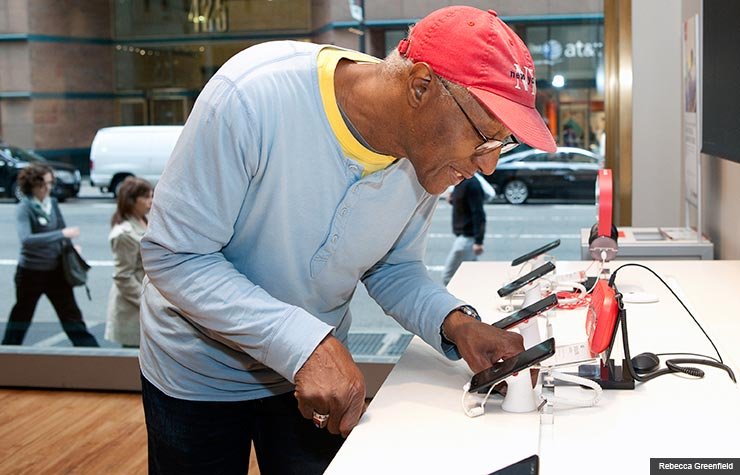 Richard Swarn shops for a phone at a Verizon store in New York.

En español | So you're fed up with your cellphone provider over dropped calls, high bills, hidden fees and more, yet you can't end the relationship because you're tied to that pesky two-year contract.

Relief may be on the way: Carriers increasingly are abandoning the old contract model in favor of plans that offer phones with robust features — and a lot fewer restrictions.

You're likely familiar with the traditional model: Carriers sell you a cellphone at a reduced price bundled with a two-year service contract to help subsidize the cost of the equipment. Breaking up with your phone company before the end of your term generally means paying a hefty termination fee, sometimes as much as $350. If you decide to stick with the same carrier, you can get an "upgrade" (a new phone) as long as you renew for another two years.

But now a host of companies are competing for your business with new no-contract options that may be less expensive or a better deal. T-Mobile, the smallest of the major U.S. providers, has replaced its two-year contracts with several no-contract options. The carrier now sells contract-free phones at the regular retail price, such as a Samsung Galaxy S4 smartphone recently listed in its online store for $627.99. After the down payment, generally about $100, you pay about $22 a month until the phone is paid off. The service agreement lets you leave at any time without penalty as long as you pay the balance on the hardware.

T-Mobile has also introduced a plan called JUMP!, which lets you swap your phone for a newer model as soon as six months after enrolling. The company charges an additional $10 a month for that feature, which gives you as many as two upgrades per year.

Verizon and AT&T, the two largest carriers in the U.S., have both countered with their own early upgrade plans. Edge, as Verizon's option is known, splits the full retail price of the phone into 24 monthly payments and adds it to your monthly bill. Rather than wait until the end of the two-year agreement to get a new phone, you can be eligible after six months, as long as at least 50 percent of the phone's price is paid off. When the phone is paid for, no more installment payments are required.

Like the JUMP! plan, AT&T's early upgrade plan Next comes with no down payment, activation, upgrade or financing fees. The cost of the phone is divided into 20 monthly payments, and you can upgrade after 12 months.

If you always crave the latest model, these upgrade plans may be appealing.

There are a few things you can try to end your contract early, although it's not easy. For instance, moving to an area that doesn't have any coverage from your current carrier may be grounds for cancellation without fees. Sometimes waivers are also issued for poor service. While these types of cancellations are rare, it's always worth asking.

Also, most major carriers will allow you to transfer your contract to someone else, so you may be able to turn it over to a son, daughter or friend who is willing to assume the payments. However, as no-contract plans proliferate, there may be less incentive for people to take over your obligation.

Options for no-contract phones include prepaid and pay-as-you-go. These plans offer cellphone service without going through a credit check. A number of carriers such as Verizon and AT&T offer prepaid plans with unlimited text and calls with a daily, monthly or per minute allowance. With prepaid plans you pay up-front for a certain amount of usage. Pay-as-you-go plans allow you to purchase minutes up front and add minutes as needed.

While prepaid and pay-as-you-go plans used to offer only basic phones, today's prepaid options often include smartphones. They may not be the latest models, but you can get some nice phones. For example, Consumer Cellular [see Discounts, right] offers an LG Escape with touchscreen for $300 with its plans.

In certain cases, some carriers will let you use your existing cellphone. If the phone is compatible with their network, you just switch out the SIM card (a removable card that stores most of your data), and you're good to go.

Carriers featuring these plans include Net10. Net10's pay-as-you-go plan gives you 200 minutes for $20 with no contract. Plans that offer more minutes are also available.

Many of these smaller companies use cell towers and lines leased from other companies and have their own coverage maps. Not all have the fastest or most widespread service, but for many users they offer enough to keep them happy.

Sandy Berger is a technology journalist based in Pinehurst, N.C. She has written eight books on tech including Sandy Berger's Great Age Guide to Better Living Through Technology.

Coverage: Before you commit, study the coverage maps on the provider's website. Better yet, if you have a friend using the service provider you're interested in, see if she or he can get a signal from a few of your most frequented locations: home, bank, office, supermarket, etc.

Speed: If you'll be doing a lot of Web surfing or watching videos, check the carrier's listed speed. Speeds range from 2G, the slowest, to 4G LTE, the fastest. 4G or 4G LTE will give you the best connections, which you'll need for smooth and seamless video playback.

Hidden fees: Many companies charge an activation fee of $35 per line and an upgrade fee of around $30 when you get a new device.

You may not pay much attention to taxes, surcharges and fees when you sign up for cell service, but they can significantly hike your monthly charges. Your location and specific plan will determine how much you'll have to pay in extras. On its website, Verizon states that "as of October 1, 2013, [taxes, surcharges, and fees] can add between 6% and 42% to your standard monthly access and other charges." Other cell carriers have similar charges.

Bonus features: Some phones, like the Jitterbug from GreatCall, come with no contracts and offer additional features like the 5Star Urgent Response for 24-hour-a-day emergency service. A basic plan costs $19.99 for 200 minutes. With Jitterbug plans, you can even call a Jitterbug agent to add a contact to your address book for you.

Discounts: Some cellphone carriers have negotiated employee discounts with businesses, states and schools. These discounts can mean as much as 25 percent off your monthly bill. AARP members can get a discount through Consumer Cellular. Big-box retailers such as Target, Best Buy and Walmart occasionally have in-store promotions and discount coupons.

Returns and exchanges: Make sure you can exchange the phone if it doesn't give you good reception.

Each cellphone carrier has different return policies. For instance, Verizon gives you 14 days to return or exchange a cellphone with a $35 restocking fee. At AT&T you have 14 days with a similar restocking fee. Any phone purchased from Boost Mobile at its website can be returned within 14 days with preapproval, but exchanges are not allowed.