En español | I like to celebrate Halloween as much as anybody else, but I grimace at the thought of throwing away a perfectly good pumpkin after using it for only a few days as a decoration.

Americans buy more than 1 billion pounds of pumpkins at Halloween, and the vast majority of those end up in the trash. But at this cheapskate's house, we eat our jack-o'-lantern — every last bit of it.

See also: Don't throw that away! 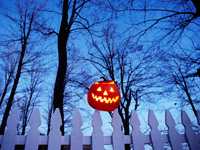 While some varieties of pumpkins are specifically grown to be eaten and are a little meatier and tastier (including sweet Jack Be Littles, Cheese Pumpkins, sugar pumpkins and some delicious heirloom varieties), any commonly available pumpkin is edible.

Pumpkins are a true American vegetable, a favorite of Native Americans before becoming a staple of early European explorers and settlers in the New World. According to the American Institute for Cancer Research, pumpkins are packed with beta carotene, a powerful antioxidant that fights cancer.

Best of all, at Halloween (and immediately after Halloween) you can usually buy pumpkins for less than half a buck a pound. If you're buying a pumpkin specifically for eating, the smaller ones are usually the best. If you're going to use it as a jack-o'-lantern, as well, you can eat or freeze some of the pumpkin when you carve it, and then pickle the remaining rind when Halloween is over, provided that it's still in good shape.

Here's how to eat all of your jack-o'-lantern:

Get Creative With the Seeds

Toasted pumpkin seeds are a healthy snack, filled with magnesium, zinc, manganese, iron, copper and protein. They're also great as a nut substitute in bread, salads, muffins and other recipes.

Make the Most of the Pulp

The thick, bright-orange pulp lining the inside of the pumpkin is the real meat of the matter when it comes to making pies, cakes, bread, soups and most other pumpkin delicacies.

You can eat cooked pumpkin pulp just like squash, with salt, pepper and butter. Here are some of my favorite pumpkin recipes:

A fall tradition at The House of Cheap.

Try this one as soon as the pulp cools.

Next page: How does a casserole sound? >>

I always make this casserole the day we carve our pumpkin. When carving your jack-o'-lantern, save the cutout nose, mouth, eyes, etc., to decorate this face-shaped casserole.

If your lantern survives the night of hell-raising by neighborhood teens and shows no signs of worrisome rot, inordinate candle scorching or excessive wax buildup, real cheapskates separate themselves from the rest by pickling the rind of their jack-o'-lanterns the day after Halloween.

(*Doris is uncomfortable with the thought of discarding anything, even spent vinegar, so she instead uses it to clean some windows around her house while her pumpkin rinds are cooking. You gotta love a truly frugal woman.)