En español | Even by Ohio standards, the Charltons' vegetable garden is a whopper. It covers more than three acres of very rich, very flat farmland on David and Amy's ranchette outside Bowling Green. Then again, I suppose it takes a big garden to raise a big zucchini, like the one the Charltons grew a few years back that took the blue ribbon at the Wood County Fair.

But it's not their prize-winning zucchini that makes the Charltons beam with pride when they tell me about their vegetable. It's the purpose behind the garden that makes them rightfully proud. For the past nine years, the Charltons have cultivated their massive vegetable garden in partnership with their grandchildren, ages 8 to 16. Working together, they've sold the produce at a roadside stand in front of their house, with all the proceeds going into a special college fund the Charltons set up for their grandchildren. David and Amy pay for all the seeds, fertilizer and other costs, but from planting to weeding to closing the sales with customers, it's a two-generational team effort throughout. 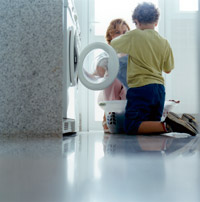 "It's given us a chance to spend time with our grandchildren and give them something for college that we otherwise couldn't have afforded," Amy says.

Want to help out your grandkids financially, but can't afford to give them a blank check? Consider these ideas for helping to raise fiscally fit grandchildren:

Mentor young entrepreneurs: Other grandparents can learn from the Charltons' example, even if you don't have enough acreage to start a veggie farm. Consider helping your grandkids start a simple business enterprise of their own, such as pet sitting, lawn care or organizing a family yard sale. As the Charltons know, it's a great way to spend time with your grandchildren — particularly in the summertime when Mom and Dad can use a little kid-free time — and it teaches them about work, money and how to get along with other people.

Teach your (grand)children well: According to Nathan Dungan, author of the book Prodigal Sons and Material Girls: How Not to Be Your Child's ATM, only about 10 percent of American parents make a formal attempt to teach their kids about managing money and personal finance. And most schools offer little in the way of personal finance courses. Grandparents can help fill that void by taking the time to talk with their grandchildren about money and, specifically, the three principles of "Share, Save, Spend," a mantra around which Dungan has created an entire curriculum to help families learn about money. From setting up a lesson-centered compensation system when your grandkids help out with household chores, to helping them understand banking basics and how to save for major purchases, grandparents can be a voice of experience and reason on a wide range of financial matters.

Become a resident expert on college scholarships: According to the U.S. Department of Education, there is more than $3 billion available each year to college students in the form of scholarships, grants and other funding. Researching and applying for available scholarships and grants can literally be a full-time job — since there are thousands of possible funding sources — and it falls at a time when your grandchildren are nearing high school graduation and need to be studying all the harder. Carol B., one of my Miser Advisers from Michigan, became the family expert on obtaining scholarships and grants, and has helped four of her grandchildren nab more than $55,000 in college funding in the past six years. "When they come to Grandma's house, they know I'm going to sit them down at the dining room table and help them apply for the scholarships I've been researching for them," she says. Carol has taken free workshops on the topic offered at her local community college and elsewhere, and her background as a school librarian (retired) doesn't hurt when it comes to doing the research. "But anybody can learn this stuff and figure out the system," she adds.

Grandma and Grandpa Dorm: And speaking of your grandkid's college plans, if you have a college in your area — and a spare bedroom, since the kids are long gone — what about offering a grandchild free room and board at your place if they want to attend a local school? More and more grandparents are doing just that in lieu of directly contributing to their grandchildren's college funds, something lots of retirees have a hard time doing in this investment climate. "It's been a real win-win," one of my Miser Advisers told me about letting her grandson live with her while he attends the University of California, Berkeley. "I was struggling to keep up with home repairs and other chores around this place, and he was having a hard time coming up with enough to pay for college. So I decided to help him out a little by inviting him to live here if he'll help me with my chores." I'd say that's more than a "little" help: According to the College Board, the average cost of room and board at a public university is now nearly $30,000 for a four-year degree.

Give a leg up with a hand-me-down: My first car was a 1969 Buick LeSabre, a 10-year-old vehicle — only slightly smaller than the state of Oklahoma — that my grandparents were ready to trade in but gave to me instead. At the time I felt a little self-conscious, a cool college dude driving an old-folks car. But I didn't miss the monthly car payments my friends were struggling to make. Before long my LeSabre became a bit of a cult classic on campus. Don't assume that your would-be throwaways — from furniture and clothing to cars and housewares — won't be appreciated by your grandkids. Hand-me-downs will save them money when they're starting lives of their own and need it most. Let's hope they'll think of you whenever they use them. (Now, if I still had that Buick LeSabre, I could afford to retire.)

When you do write a check, make it count: And finally, on those occasions when you do find yourself writing a check, always look for "carrot opportunities," as Miser Adviser Sid Caldwell refers to them. "I don't mind helping my grandkids out from time to time, or sometimes giving them a check for their birthdays," he says. "But if I can help them learn something at the same time, then I feel like I'm getting two for the price of one." Sid often offers to match amounts earned by his grandchildren for larger items they're saving for, such as a car or a class trip. "It teaches them about the importance of saving up for something major and being able to afford it before you go out and buy it," he says. "I sometimes think their parents could benefit from the same lesson."