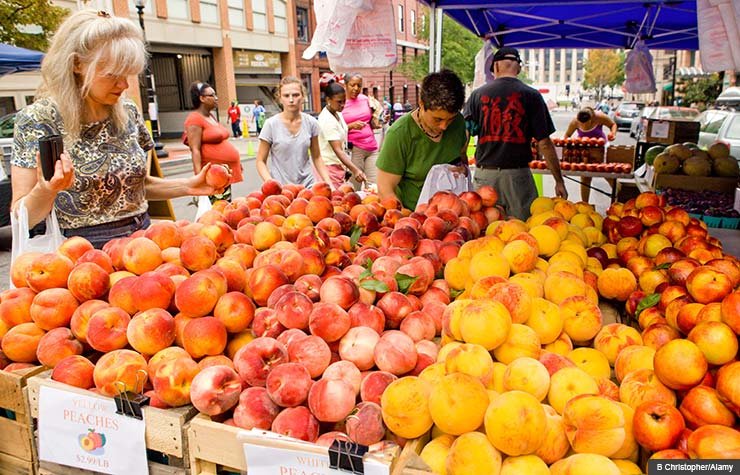 Shopping at the farmers market can save you money and give you access to great local food sources.

En español | One of my rules is: If it's good for the planet, it's usually good for your wallet. And we're not talking about petty cash. Changing some simple things in your life can add up to significant savings. Here are a few areas that can give you great rewards.

Whether you're replacing one appliance that's seen better days, or many because you're moving or renovating, you probably know to look for the Energy Star label. That's good advice.

An Energy Star refrigerator, for example, will save you $200 to $1,100 in energy over its lifetime — and help reduce greenhouse gases. What you may not consider is the size of the appliances you actually need, says Danny Seo, a green living expert, particularly if you're buying a new fridge. "It's one of the biggest energy hogs in the home," says Seo. "It's on 24 hours a day. You can find a big industrial one with the Energy Star but if you're an empty nester, think about getting a smaller refrigerator." Then, he says, sell your old one to a scrap metal dealer. The store from which you buy the new one will likely be willing to haul your old one away, but, Seo notes: "There's probably $50 of scrap in there."

2. Power down your cable box

It may be small, but it also runs constantly, and that makes it the second biggest energy hog in the home, says Seo. In fact, a single box can cost you $250 in energy a year. To reduce that cost, put your cable box on a surge protector. Turn it off before you to sleep and on in the morning (and if that's too much of a hassle, set up a timer to do it for you.) The eight-hour respite will save you $80 to $100 a year. (And yes, if you have multiple cable boxes, you can multiply your savings as well.)

There are few costs that bug me more than the $50-plus you spend on ink cartridges for your home printer. You can save money by buying cartridges at Costco or at Staples, which routinely hands out $25 coupons on online orders of $75 or more.

You can also make the ink go further by changing your font. The default for most documents is Arial or Times New Roman. A switch to Century Gothic will reduce your ink usage by 20 to 25 percent. Depending on how often you change your cartridges, that'll quickly add up. And yes, this is also good for the Earth. According to Cartridgeworld.com, it takes a gallon of oil to make a new laser cartridge, only 30 percent are recycled and those that aren't can take up to 450 years to decompose.

If you steer clear of farmers markets because you think it's pricier than the supermarket, research shows that unless you're buying eggs or potatoes, you're wrong. A study conducted by a Bard College researcher for the Northeast Organic Farming Association of Vermont found that on average supermarket prices on nonorganic items were 10 to 20 percent more expensive.

What's more, the disparity on organic items was even greater. One reason? Transportation, says Doreen Kukral, author of Save Green While You Go Green. When fruits and veggies are being shipped hundreds if not thousands of miles there's a cost to that (both to your bottom line and to the Earth.) Oh, and when you put that fruit away, don't — do not — create a fruit bowl. It might be pretty, but keeping your apples and bananas (or other fruit) next to one another in this manner causes them to ripen too quickly. Keep them separate and you'll end up throwing fewer away.

Finally, it's important to know that everything you have plugged into an outlet — even if it's not in use — is consuming energy, says Kukral. "Some 15 to 20 percent of home energy use is consumed by electronics in standby mode or turned off. If you don't use it frequently, unplug it. Otherwise, it will pull phantom power." To make it easier on yourself, plug computers and entertainment systems into power strips. Then, you can shut everything down with the flip of one switch. Pull the cord and you eliminate phantom power to the strip as well. "If you were going to do just one thing in your house," she says. "I'd say that's a smart way to go."

Jean Chatzky is the author of several books, including Money Rules.