Having a romantic partner who has different views of money is not uncommon, nor is it in many cases a formula for wedded bliss. Differing views on money and underlying financial problems are consistently listed among the top reasons why so many American couples split up according to a 2012 survey from YourTango.com.

However, in a 2009 survey I conducted for my book The Cheapskate Next Door, I found that being married to a cheapskate — or, perhaps more accurately, a certain type of smart spender — can arguably result in a stronger, longer and happier marriage or romantic relationship. I surveyed approximately 320 proud, self-proclaimed cheapskates, most of whom were married or in a relationship, about their financial attitudes and behavior. 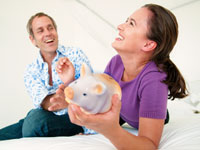 Cheapskates are far more likely to splurge on activities or experiences rather than material objects or possessions.

I discovered that cheapskates tended to divorce or separate at less than half the rate of the American public as a whole. Of course, we shared a good laugh during some of the interviews, joking that perhaps cheapskates are just too cheap to pay for a divorce! But what was more surprising was that only about a third of the married cheapskates said their spouse felt "exactly" or even "mostly" the same about finances as they did.

And yet, these so called money-opposites stayed together, happily so. As I interviewed many couples, five practices surfaced as the keys to their relationship.

Full disclosure: These couples talked openly (and in some cases endlessly) about their personal finances beyond the mechanics of how they managed their money, or how much they earned. They were also willing — almost eager — to tell me about their money differences.

Unlike many American couples, openly discussing money and finances was anything but taboo in their relationships. In fact, communicating about their household finances and future financial plans was standard operating procedure among nearly all of these couples, and had been since their relationships first started. Not a single couple — in either a "mixed marriage" or one in which both were cheapskate equals — said that their partner's attitude toward money came as a surprise once they were married or living together. In all cases, they'd fully discussed their respective attitudes about money before ever becoming romantically involved.

Fewer money worries: Even though the annual household incomes of the cheapskates I surveyed varied greatly — from barely above the official U.S. poverty level to six-figure earnings — what I found was that few cheapskate households had any significant financial problems, at least compared with those facing many American families. Only a handful had ever declared bankruptcy or ever lost a house through foreclosure, even though many of them had lost jobs because of the recession. Only about 5 percent of the cheapskate households had any type of debt other than a home mortgage and, even then, more than 80 percent of those were working to pay their home mortgage off early. In a nutshell, these cheapskate households simply had fewer financial problems to worry about, argue over and stress out about. Gee, no wonder their marriages tend to be less frayed than most.

Agree to disagree: In instances where one partner was less into penny-pinching than the other, many of the couples I interviewed addressed that issue by establishing at least one separate account that was under the sole control and discretion of the "spender," as opposed to the "saver," in the family.

Make the splurges count: Almost all of the cheapskates I surveyed said they do splurge. One of the interesting differences when it comes to cheapskates and splurging is that they are far more likely (by about 10 to 1) to splurge on activities or experiences rather than material objects or possessions. If you believe what many social scientists say about experiences and activities ultimately resulting in far greater lifetime happiness than amassing more possessions (see the excellent book Stumbling on Happiness by Daniel Gilbert, for example), then it stands to reason that cheapskate couples are making smart choices when they splurge on things like travel, time with family and friends and recreational pursuits. These are the kinds of things that tend to make us happier as individuals, couples and families.

Always keep 'em laughing: I was continually amazed — and amused — by how much time most of the couples I interviewed spent laughing. They had keen senses of humor, often of the self-deprecating variety, and were quick to laugh at themselves and their frugality. And in the case of cheapskates who married other cheapskates, there was often an ongoing good ribbing over who was cheaper! Marge: "Fred is so tight with a buck he squeaks when he walks!" Fred: "That's nothin'. Marge pinches a nickel until you can hear the windows in Monticello break!" You get the idea, and you've probably also heard that couples who laugh together stay together. Remember, laughter is free and good for any relationship.

Jeff Yeager is the author of four books including How to Retire the Cheapskate Way and The Cheapskate Next Door. You can follow him on Twitter.