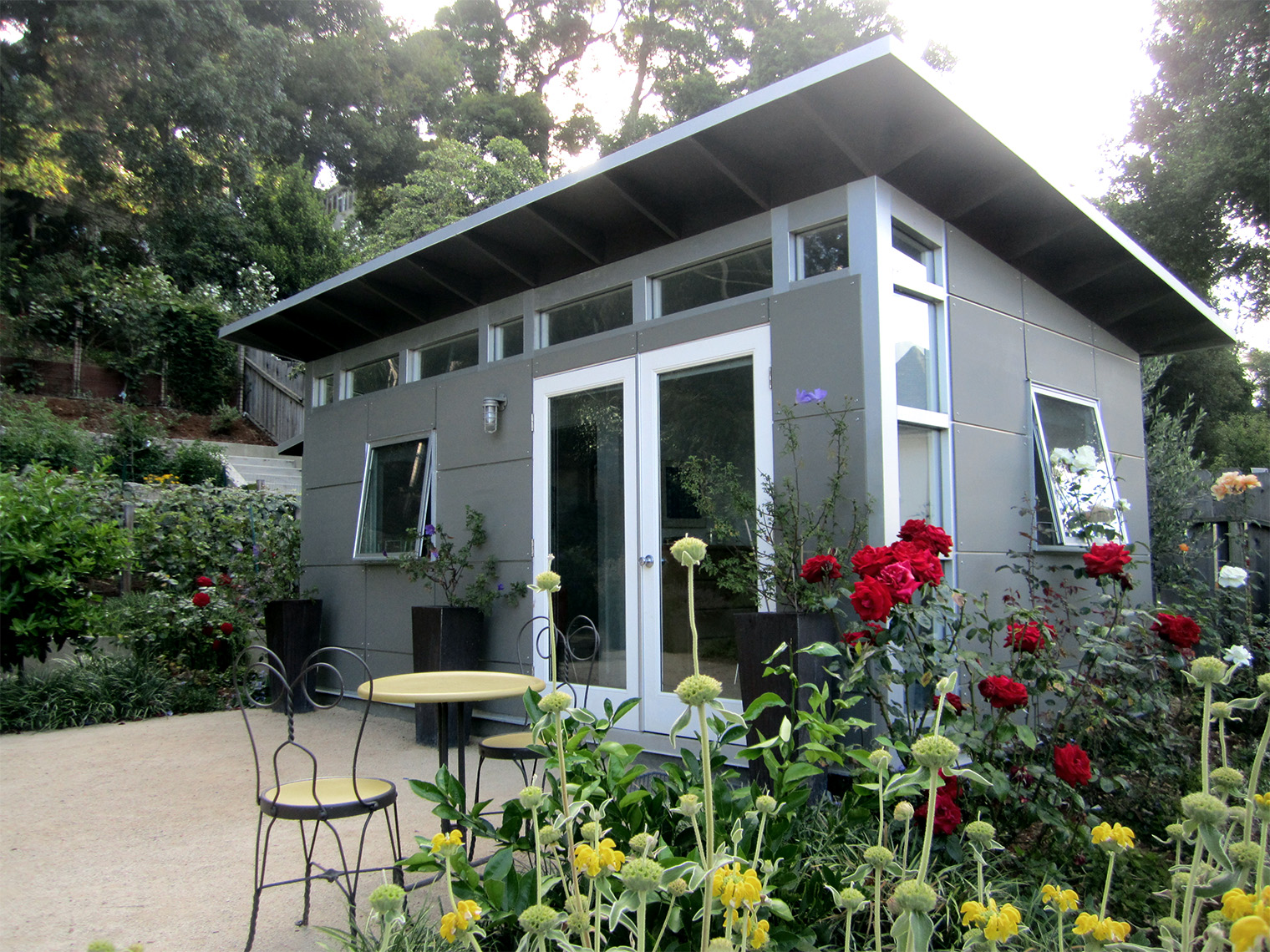 Often after downsizing the family home, women are adding a space of their own with chic sheds like this one in Oakland, Calif.

What pairs best with an empty nest? Sometimes, another nest — a tiny one, with double French doors and a chandelier strung up over a rafter, and maybe a built-in shelf with a single wine glass. Billed as the answer to the man cave, the “she shed,” as it’s come to be known, went mainstream around 2015 — when Home Depot started selling kits by that name. Pinterest exploded with images of small-scale perfection, and lifestyle bloggers emphasized how much better your coffee tastes when you’re drinking it on a divan, away from your children.

But while the need for a hyper-local getaway may be intense when you’re a young mom being asked the same question for the 10th time by a 3-year-old in your kitchen, buying something like a $20,000 prefab cabin might actually be a little more realistic a couple of decades later when college tuition isn’t due and you aren’t counting “me time” in five-minute intervals. For women over 50, a sweet little customizable building — let's call it a "me shed" — can be the answer to years of wanting a room of one’s own (one that you alone can litter with Kind bar wrappers), or the practical solution to adding just a touch more space to the house you bought when the kids flew the coop.

Take Ramona Jarvis, 59, of Austin, Texas. She and her husband downsized from a four-bedroom home to a two-bedroom one after their third child went to college a decade ago. Two years ago, she invested around $18,000 (including installation) on a 10-by-17-foot design by Kanga Room Systems to use as a backyard office for her accounting business. That, she says, has freed up their second bedroom to be a dedicated guest room “and made our house feel so much larger and more spacious.”

But beyond serving as her office, the modern, IKEA-outfitted outbuilding is also her personal domain away from, well, her husband of 38 years. With her spouse working part time now, a space tucked into their hardscaped backyard lets her set some parameters to what are now their longer afternoons together. “He gets home early in the day and sometimes will come out to my shed, and I’ll give him the stink eye because I don’t want him out here!” she says, adding that they’ve laughed about getting a “Do Not Disturb” sign for her door. “Or maybe one that says, ‘Bring me a snack. I’m hungry,’ ” she jokes. Having run electricity from her house to the unit, she sometimes also returns at night to watch TV while finishing “odds and ends” on her own. 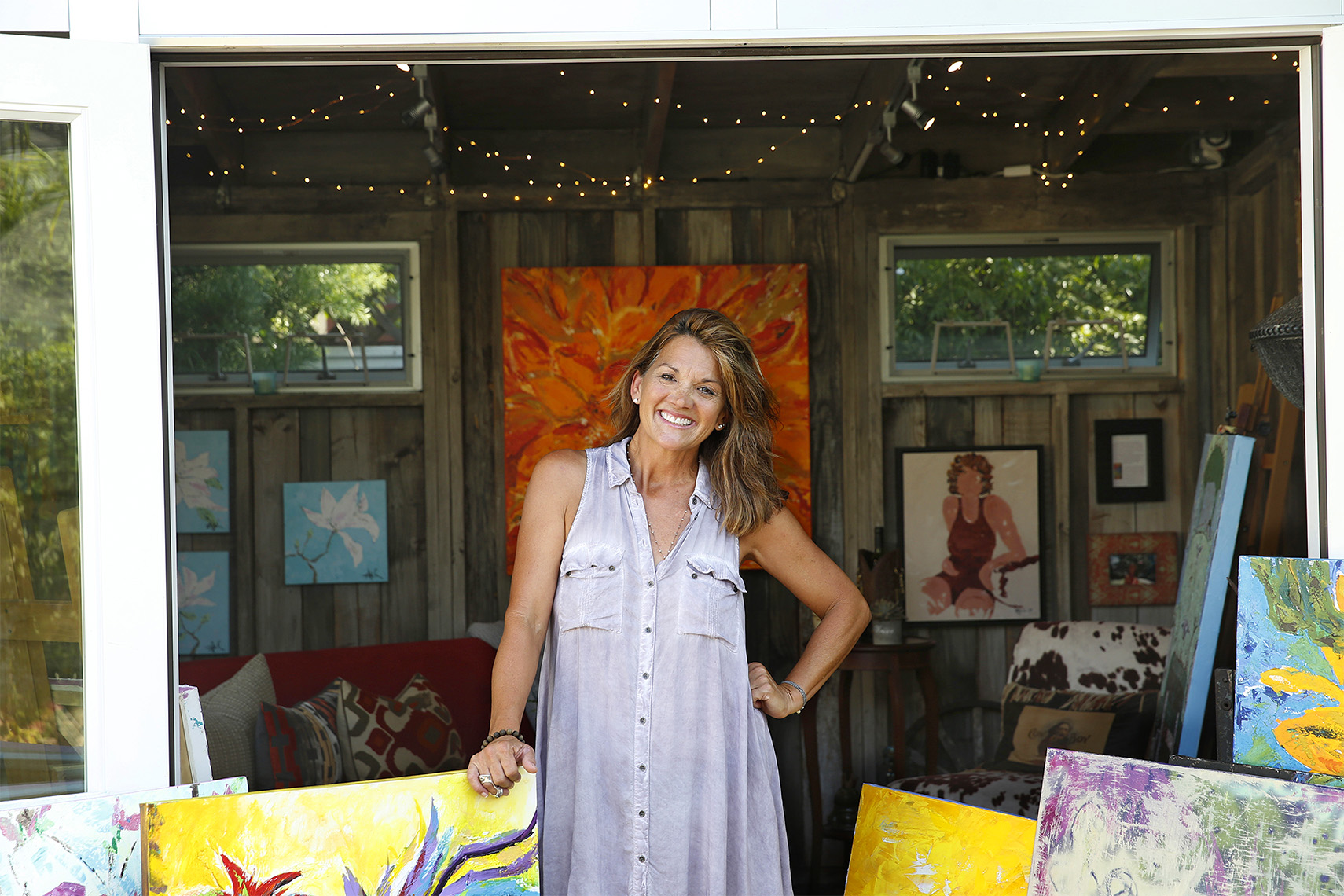 Artist Melinda Lester Yates at her Costa Mesa "she shed" where she paints and often entertains guests.

Melinda Lester Yates, 56, similarly looked into a shed-as-work space after she and her husband downsized from a large suburban home to a bungalow in Costa Mesa, Calif., when their two older children were in college. “It was always part of the plan when we bought the home seven years ago,” says Lester Yates, who put her dream of painting full time on hold for years as she raised her kids, one of whom had special health needs. After comparing the costs of constructing a studio from scratch versus going with a prefab option, Lester Yates and her husband went with the second approach, but they left the interior unfinished “since we love to do woodwork ourselves.” Indeed, they added a construction-grade white poplar floor, which they distressed for a rustic look. They also built a series of decks around the shed and created an outdoor shower.

Having a dedicated space for her many supplies and works in progress makes the start of her day so much easier, Lester Yates says, since she no longer has to fetch items from the garage or set up an easel on the deck before she gets going. “I just open the studio up, and I can start painting,” she says. “It’s just a great place to be creative.” In the evening, once she’s put away her canvases, acrylics and palette knives, she opens the glass doors wide, lights the nearby fire pit and has a great place to entertain neighbors or visiting kids.

Others have chosen to dedicate the backyard building as an extra bedroom or guest space. Empty-nesters Laurie and Tim Johnson, of Oakland, Calif., for instance, used their sleek and modernist 10-by-18-foot cabin from Studio Shed (pictured at top), tucked near the top of a terraced lot, as a place to live during construction of the home they built after each of their three kids had either moved out or gone to college. "We rather liked it," says Laurie. "It was like glamping." The outbuilding has also served as temporary living quarters when two of their adult children unexpectedly moved home from the East Coast.  Having given the first returnee the choice of a bedroom in the new house or quarters in the standalone shed, “You can guess which one she picked,” says Johnson, who notes her third child subsequently moved into the shed temporarily after he finished college. 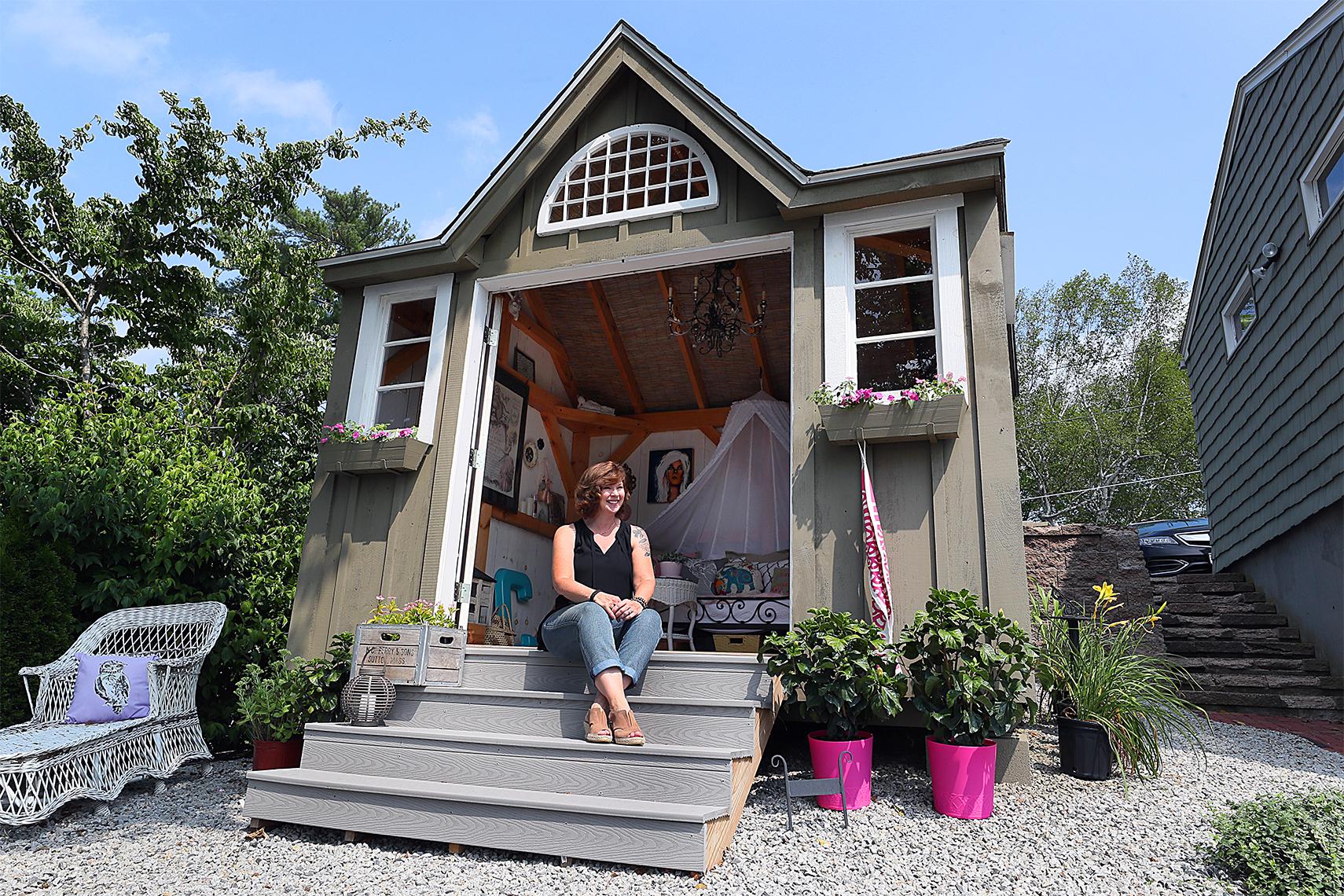 Sometimes, however, the trend for the after-50 set isn’t so much a matter of extra square footage, but a statement about doing something for yourself when you realize it’s high time to do so. Such was the case for Laureen Clauson, 52, of Webster, Mass., who decided to finally build her dream shed last summer after years of collecting inspiration shots on the subject. At the time, she’d also nearly completed treatment for a recurrence of breast cancer. “I had plenty of room in my house, but this was just something that was mine, a place I could have coffee, drink wine, color, take a nap and make all me.”

Her husband customized a post-and-beam garden shed from a local company, with things like an antique window and French doors found on Craigslist, and set it on a foundation of concrete footers. The price tag was about $5,000. “Our neighbor asked him why he couldn’t just buy me jewelry, like everyone else. But he told her, ‘She wants a shed.’ ”

The decor made for the truly fun part for Clauson, who also opened an antiques store in Putnam, Conn., around the same time. Inside her lake-facing abode, a Buddha statue and candles offer a meditative touch — but pink is the major theme. Varying shades of the hue dot the dozen throw pillows on the daybed and are laced through framed vintage “girl” pictures. For the most part, the space really has remained her own, though she says visitors are welcome. “I wouldn’t want my husband to have to live in a pink environment, but he doesn’t mind coming into the shed to see me.”