"There are many times while I am out in the field that I really feel the need to talk to you," 27-year-old 1st Lt. Dean Allen wrote to his wife, Joyce, from Vietnam on July 10, 1967. “Not so much about us but what I have on my mind.” At 6-foot-1, 200 pounds, Allen cut an imposing figure, but under his tough exterior was a compassionate, thoughtful officer who genuinely cared for his men. “Being a good platoon leader is a lonely job,” he wrote. 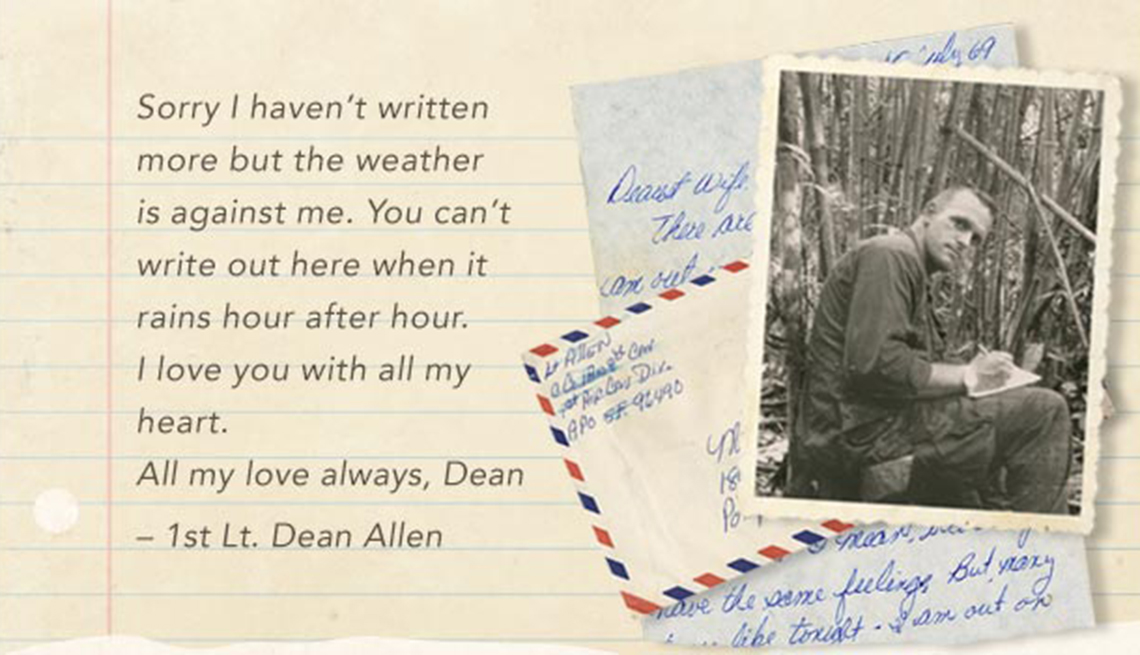 Allen continued the letter the next day:

It got so dark I had to stop last night. …
Writing like that doesn’t really do that much good because you aren’t here to answer me or discuss something. I guess it helps a little though because you are the only one I would say these things to. Maybe sometime I’ll even try to tell you how scared I have been or am now. … Sometimes I really wonder how I’ll make it. My luck is running way to good right now. I just hope it lasts.

Don’t worry about what I have said, these are just things I think about sometimes. I am so healthy I can’t get a day out of the field and you know I’m to damn mean to die. …

Sorry I haven’t written more but the weather is against me. You can’t write out here when it rains hour after hour.
I love you with all my heart.

All my love always, Dean

Four days later, Allen stepped on a land mine. He became one of the more than 58,000 Americans who died in Vietnam.

Since the early days of the Revolutionary War, American soldiers have been writing letters that shared their fears, hopes for the future, and love with those who waited anxiously behind.

“This is the ﬁrst chance I have had to write you. I am, by the cause of Providence, in the ﬁeld in defence of my country,” James Williams began a letter to his son, Daniel, on June 12, 1779. Williams went on to express how deeply he missed his eight children and their mother, “who sits like a dove that has lost its mate, having the weight of the family on her shoulders.” He described the accidental death of a fellow soldier, then concluded, “uncertainty of life ought to induce every man to prepare for death.”

Williams died at the Battle of Kings Mountain in South Carolina. His letter is among the earliest of those preserved in which American soldiers confront the possibility that they are communicating with loved ones for the last time. Sadly, those last letters home would continue to document the tragic legacy of war, through Iraq and Afghanistan.

From Bunker Hill to Fallujah, Americans have written hundreds of millions of war letters. Their words form the pages of our national autobiography, offering eyewitness accounts of major battles from Lexington and Antietam to Normandy, the Chosin Reservoir, Khe Sanh and Kandahar.

On a more personal level, these correspondences provide a tangible connection to the past and humanize our men and women in uniform, capturing their distinct personalities, experiences and aspirations. Through their words, we see them as more than just soldiers, Marines, airmen and sailors. They are a parent, a sibling, a child, a spouse, a fiancé or a best friend. Ultimately, these letters, which are reproduced without spelling or other corrections, ensure that we never forget the sacrifices made for the nation. Here are some of the last thoughts from those who died in action, as only they could express them.

On Sept. 11, 1918, Sgt. David Ker, a Columbia University student who had dropped out of college to fight in World War I, sent a letter to his mother the day before the attack on Saint-Mihiel in France. While some troops consider it bad luck to write an “in case I die ...” letter, Ker wanted his mother, his sister (Elizabeth) and his fiancée (Mary) to keep their spirits up, no matter the outcome. 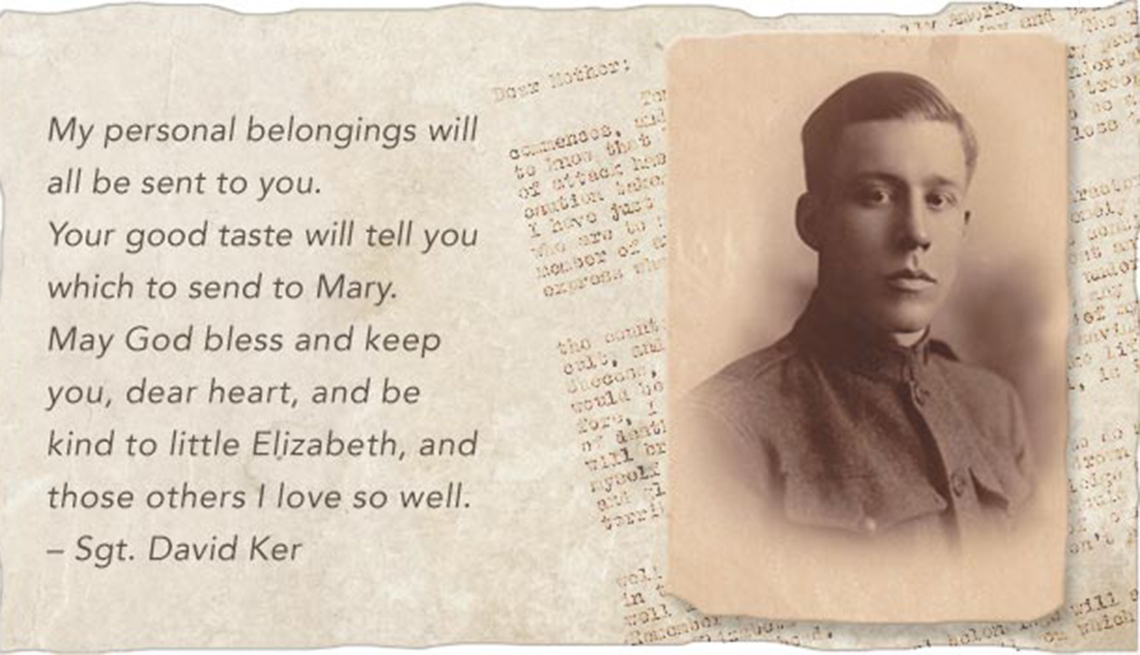 “Tomorrow the first totally American drive commences, and it gives me inexpressible joy and pride to know that I shall be present to do my share.

Should I go under, therefore, I want you to know that I went without any terror of death, and that my chief worry is the grief my death will bring to those so dear to me.

Since having found myself and Mary, there has been much to make life sweet and glorious, but death, while distasteful, is in no way terrible.

I feel wonderfully strong to do my share well, and, for my sake, you must try to drown your sorrow in the pride and satisfaction, the knowledge that I died well in so clean a cause, as is ours, should bring you. Remember how proud I have always been of your superb pluck, keep Elizabeth’s future in mind, and don’t permit my death to bow your head.

My personal belongings will all be sent to
you. Your good taste will tell you which to send to Mary.

May God bless and keep you, dear heart, and be kind to little Elizabeth, and those others I love so well.

The Americans broke through the German lines but suffered 7,000 casualties in the three-day offensive. Twenty-year-old David Ker was among the dead.

Among the most heartbreaking war letters are those written by soldiers who have been mortally wounded and realize that their life is ebbing away. John Ross Wallar volunteered to serve as a drummer boy in the Civil War when he was only 15 years old. He was shot in the leg and languished in a military hospital for days. From his bed, he dictated a short letter to his family before he died: 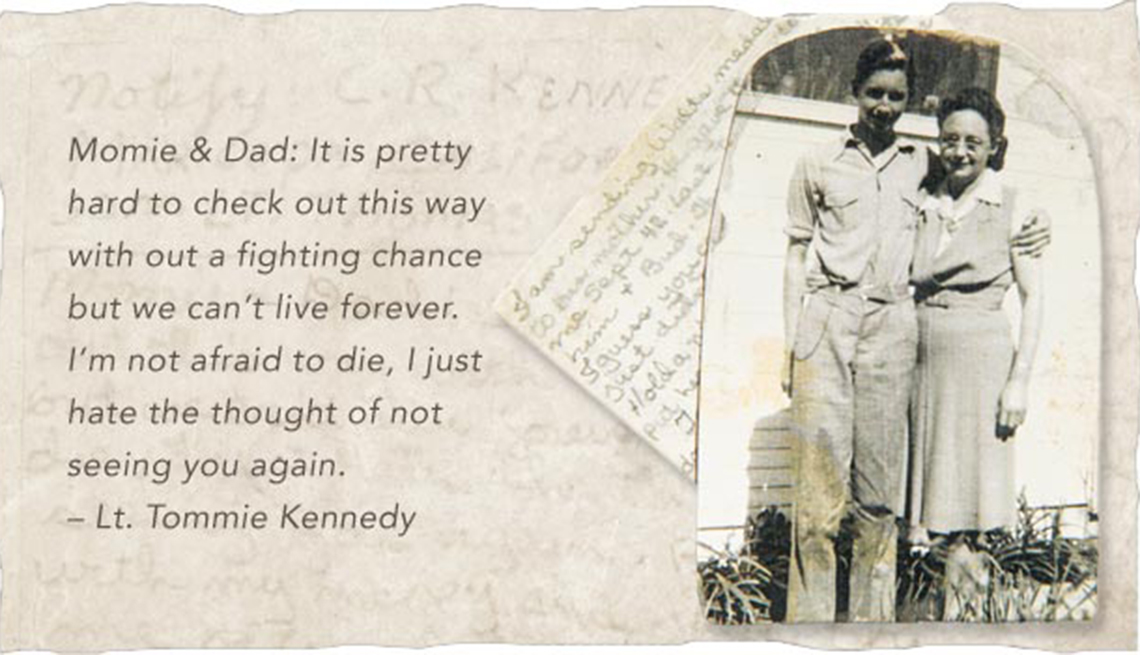 Like Wallar, a 21-year-old second lieutenant named Tommie Kennedy serving in World War II knew he would not come home alive. He had been captured by the Japanese at Corregidor and spent nearly three years as a prisoner of war. Fatally malnourished and incarcerated on a “hell ship,” Kennedy scribbled a farewell message to his parents on the backs of two family photographs.

Momie & Dad: It is pretty hard to check out this way with out a fighting chance but we can’t live forever. I’m not afraid to die, I just hate the thought of not seeing you again. Buy Turkey Ranch with my money and just think of me often while your there. Make liberberal donations to both sisters. See that Gary has a new car his first year hi-school.

I am sending Walts medals to his mother. He gave them to me Sept 42 last time I saw him & Bud. They went to Japan. I guess you can tell Patty that fate just didn’t want us to be together. Hold a nice service for me in Bksfield & put head stone in new cematary. Take care of my nieces & nephews don’t let them ever want anything as I want even warmth or water now.

Loving & waiting for you in the world beon.

Kennedy’s letter was smuggled from one POW to another, and it was finally mailed to his parents in late 1945 — more than four years after their son had left for the Pacific.

During the wars in Afghanistan and Iraq, service members have been more likely to transmit their messages home as emails. But there are exceptions. In early March 2002, coalition forces began to gear up for Operation Anaconda, a major assault on Taliban and al-Qaida strongholds in the mountains of Afghanistan. Before advancing into what would become one of the worst firefights of the Afghan campaign, 23-year-old Sgt. Josh Harapko, with the 10th Mountain Division, neatly handwrote the following letter to his mother. 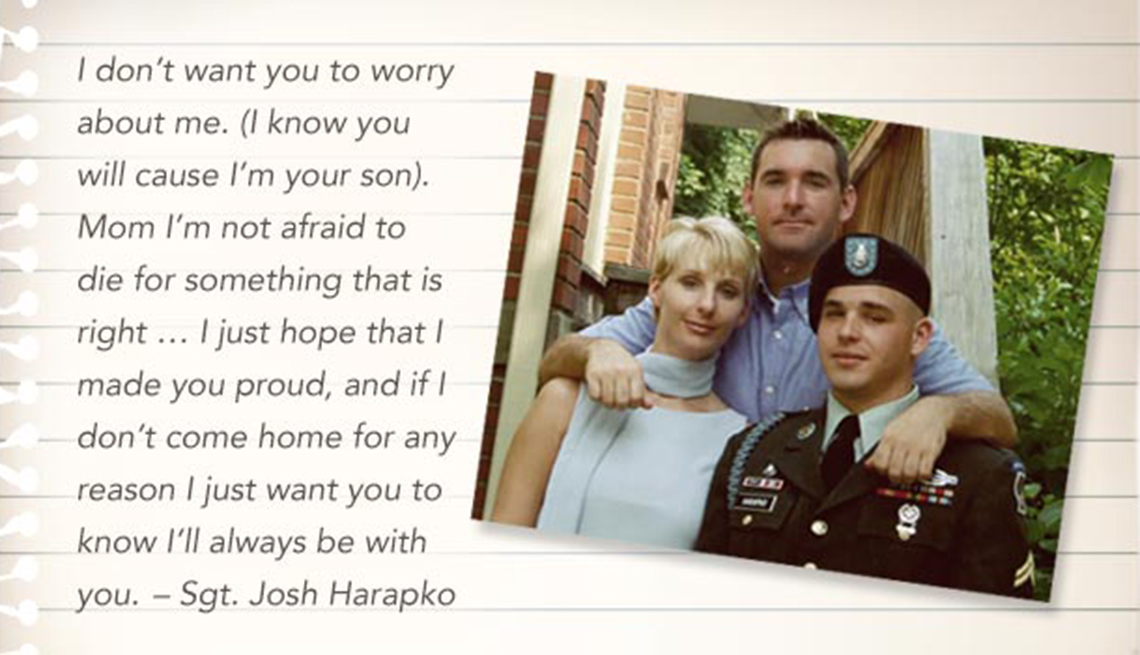 I’m writing this letter before I leave. I couldn’t say what I wanted to over the phone. First I want to say I love you so much. You were always there for me even though I would never talk about my problems. Second you gave me the options to be a man giving me slack in the rope to try to make the right decisions. No matter what you always believed in me, no matter how much of a punk I was to you. We are leaving for Bahgram to flush out 600 Taliban soldiers from the mountains. This is the biggest battle of the war on terrorism. We already sustained 30 casualties and one KIA. …

I don’t want you to worry about me. (I know you will cause I’m your son). Mom I’m not afraid to die for something that is right … I just hope that I made you proud, and if I don’t come home for any reason I just want you to know I’ll always be with you. … I want you to know you raised the cream of the crop. … Well Mom I have to go now, all that I have said here are words from my heart and I mean every last one of them. Tell Aunt Joyce I said hi and I love her. I hope to see you soon but if that doesn’t work out I just needed you to know how I felt. I Love you and Miss you. Take care your always in my thoughts.

If you have a letter or letters (originals, photo-copies and scans are all accepted) to share from any conflict, including emails from Iraq or Afghanistan, send them to Andrew Carroll at P.O. Box 53250, Washington, D.C. 20009. For more information, go to www.WarLetters.us

Harapko survived combat in Afghanistan but died almost exactly one year later, on March 11, 2003, when the Black Hawk helicopter he was flying in crashed during a training mission at Fort Drum, N.Y. Shortly before he died, he decided to give his mother the letter he had written in the uncertain hours before Operation Anaconda. She cherishes it as his last letter home.

Andrew Carroll, editor of the New York Times bestsellers War Letters and Behind the Lines, was inspired to seek out and preserve wartime correspondences after a fire destroyed all of his family’s possessions. He recently donated his entire collection of 100,000 war letters to Chapman University in Orange, Calif.