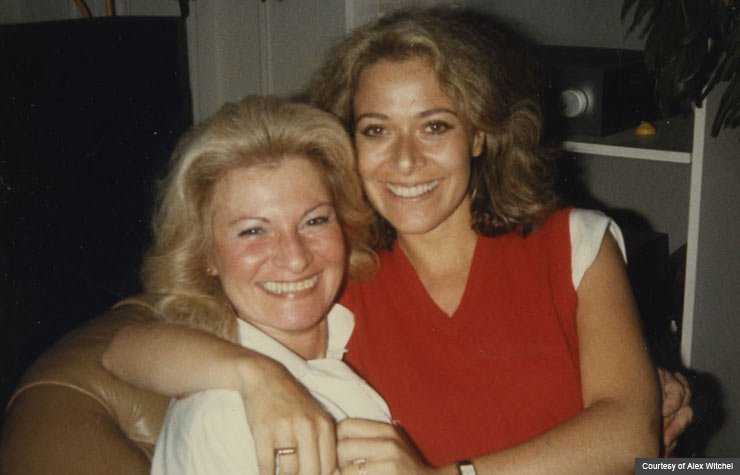 Author Alex Witchel with her mother.

You could sum up my father's reaction to my mother's first year of dementia in two words: Bad Waitress.

"Last week I asked her for eggs over easy and she scrambled them," he shouted over the phone one day in 2005. "Today it happened again."

I kept my tone neutral. "She didn't do it on purpose," I said. "She actually couldn't remember what you asked."

"The hell she couldn't," he snapped. "She's just not paying attention."

I tried defending her further, but he had already hung up.

When my father accompanied us to Mom's neurologist's office in Manhattan, the doctor displayed her brain CT scans on his computer screen. As he started to identify where the scar tissue from numerous small strokes had formed, disabling her memory and exacerbating her depression, my father, then 81, stretched out his legs, folded his arms and closed his eyes, feigning sleep.

Certainly, his capacity for denial was epic, though in fairness, my two brothers, sister and I were not far behind. We figured that whatever the doctors found, my 72-year-old mother would have the requisite surgery, take the necessary pills and snap out of it. She'd go back to being a psychology professor and college administrator, The One Who Was Always in Charge.

But then came the driving, the Mount Everest of aging-parent issues, the one that none of us could scale or deny. One day I watched her behind the wheel and it became clear she was lost in the suburban town she'd lived in for 40 years. Though she kept telling me we were going home, she had no idea how to get there. The drama not only exposed my mother's vulnerabilities as a driver but also precipitated a seismic shift between parent and adult child, a redefinition of authority and independence.

Control of the car keys is often a flash point for families dealing with dementia, I've since learned, because the disease makes it harder for a person to recognize when skills are fading. "It's the hottest topic we have," says Angela Lunde, a dementia education specialist at the Alzheimer's Disease Research Center at the Mayo Clinic. "In a disease with significant losses, the loss of driving ability happens early. Someone with even a mild dementing illness behind four tons of steel is not a good idea."

I understood my mother's passion for driving. At 3 she had contracted polio in a swimming pool in the Bronx, and although she didn't lose her ability to walk, it was never as easy for her as driving. To lose that mobility would be devastating.

Mom's neurologist was sympathetic. Of course she should keep driving, he assured her. All she needed to do was pass a simulated driving test at the nearby Burke Rehabilitation Center. She failed it. Twice.

My siblings and I looked to our father for guidance about Mom's situation, but he wasn't giving any. For the 50-plus years of their marriage, he had considered her the superwoman/wife/mom. She took care of their children, and she took care of him. The idea that he take care of her seemed to confound him. Putting the correct pills into the Morning, Noon and Night boxes of a plastic medication organizer proved such an ordeal, I had to cancel a business dinner and take a train from the city to do it myself.

This is not uncommon, says Lisa Gwyther, director of the Duke Family Support Program and an associate professor in the university's department of psychiatry. "A lot of spouses believe they're being disloyal to acknowledge incapacity in a spouse," she says. "That reflects on their choice, particularly with men. Many of them tell me, 'I need to believe she's going to get better in order to wake up every day and deal with her.'"

It became apparent that as a family, we needed some help. Our doctor put us in touch with a social worker, Roberta Epstein. With Mom now retired, Epstein and the doctor encouraged her to participate in recreational activities — painting classes, museum field trips. My mother's dismissal was scorching. She was too old for summer camp.

But the doctor prevailed. It was essential, he said, to have activities to look forward to. We enrolled her in ceramics, a poststroke exercise class and a weekly lecture series. Visits to the library, her longtime haven, were no longer possible; she had lost her ability to read. "By the end of a paragraph, I can't remember how it started," she admitted reluctantly.

Epstein coordinated a series of family meetings. I had been hoping we could guide my dad to see the situation more clearly, get more involved in Mom's care. That was too simplistic an assumption, according to Karen Krefman, a licensed marriage and family therapist at the Family Institute at Northwestern University. "The idea of children 'guiding' implies a polite conversation, which the parent immediately accepts," Krefman tells me. "But adult children regress; they want to scream at their parents. Boundaries are crossed, rules change, roles change. You have to engage the healthy parent and work with him or her to accept what no one wants to accept."

Of course this was true. All of it. My own screaming sent my father out of the third family meeting, and he wouldn't come back. Yes, I was frustrated with his obstinance — his refusal to see the truth that we kids saw — but maybe what really infuriated me was that he couldn't just fix it. The way Mommy always fixed it. That seemed to be my job now, fixer in chief. Which meant what? Making doctor's appointments? Interviewing home health aides? What was I actually fixing?

In the family meetings we managed to have, Epstein logically divvied up caretaking responsibilities among my siblings and me. But if my parents had gone AWOL on their roles, my siblings' childhood reflexes kicked right in: Alex will do it. I was the oldest and, with Mom working all the time, I had always been her de facto deputy. Why would anything change now?

Also, at that point, all my siblings had infants or toddlers; one lived far away, and another was coping with illness of her own. I lived nearby, had two grown stepchildren and worked, much of the time, from home. Since that phrase seemed to evoke images of bonbons and Jacuzzis, I resented both the presumption that I was eternally available and the fact that I was saddled with the responsibility. At first. But once I delegated a doctor's appointment or two and realized that most of my questions had gone unasked by the well-meaning sibling in charge, I embraced my own type A compulsiveness, quit complaining and did it myself. Unsurprisingly, no one has minded.

So for the past seven years I have run my parents' home — paid their bills and their taxes, made sure their worn-out underwear gets replaced. After my father's initial anger, he settled down, for the most part, retreating into the denial where he was most comfortable.

"Your mother's doing very well," he would tell me, regularly. "Some days, you'd never know there was anything wrong."

As for me, I stopped arguing. I stopped expecting him to step up and fix it and stopped expecting myself to be infallible, all-knowing. It turned out that the fancy doctors, the expensive pills, the endless tests, my iron will, my reams of notes, my research, were all for naught. Dementia won. The only power I had left was to surround my mother with acceptance and kindness. "Gentle!" my sister used to caution her small sons when they would grab the cat's tail. Gentle, in the end, is all. Gentle is what my mother deserves.

Last fall my father's neurologist told me Dad, by then 88, was showing signs of dementia himself. I wasn't that surprised. He stopped working as a financial public relations consultant a few years ago and spends most of his time with my mom and her caregivers. "All adults need social and intellectual stimulation, and he's not getting it," Gwyther explains. "That could affect his cognitive performance."

His behavior hasn't changed much, so far at least. He, too, no longer seems able to read. Instead of admitting it, like my mom did, he says there's nothing good left to read in the library. He's read it all.

If he had told me that even a few years ago, I would have argued, taken him to a different library, bought him gift cards to Barnes & Noble. Now I hear what he's saying. I don't pretend that I have answers or alternatives. That I can fix it.

So neither one of them reads. He and my mom take walks. They sit on benches side by side and feel the sun on their faces. They go to sleep at night and wake up in the morning. Some days, you'd never know anything was wrong.

Alex Witchel is a staff writer for the New York Times Magazine. Her book All Gone: A Memoir of My Mother's Dementia. With Refreshments, was published last fall.