En español | Medicare beneficiaries — beset by rising costs and other threats to their financial security — got some relatively good news today.

Obama administration officials announced that the standard Medicare Part B premium for 2012 will be $99.90 a month — a lower-than-expected increase of $3.50 a month for most beneficiaries, and a decrease for many. Earlier predictions by the Medicare trustees had projected a premium of $106.60.

Doctors' services will be less expensive with the drop in the annual deductible for Part B. — Photo by Business Images/Alamy 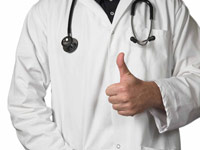 Listen to the latest news on Medicare Part B premiums.

Despite fears that next year's premium could eat up the 3.6 percent cost-of-living adjustment, known as the COLA, in Social Security checks in 2012, the relatively small premium increase means people with Medicare will have more money in their pockets next year, officials said.

The annual deductible for Part B, which covers doctors' services, outpatient procedures and medical equipment, will be lowered from $162 to $140, an almost unprecedented drop of $22.

Over the past two years, about 75 percent of beneficiaries have paid Part B premiums of $96.40 a month — the same as they paid in 2009 — because there was no Social Security cost-of-living increase in 2010 and 2011. A 1987 law protects those who receive Social Security benefits from paying more for Part B in any year when there is no COLA.

But certain beneficiaries who were not protected under that law — those who did not receive Social Security benefits, were new to Medicare or had higher premiums because of high incomes — paid premiums of $110.50 a month in 2010 and $115.40 a month in 2011.

By law, the standard Part B premium is set to represent 25 percent of expected costs in the program for the following year. So beneficiaries not protected by the COLA freeze bore the brunt of higher costs over the past two years. But in 2012, everyone will share those costs. That, together with lower-than-expected cost increases in the program — in part because of changes brought about by the new health care law, the Affordable Care Act — accounts for the relatively small increase in the standard premium, Medicare officials say.

Only a "very tiny fraction" of beneficiaries will have premium increases that eat up their Social Security cost-of-living increases for 2012, Medicare officials say.

"A typical retired worker will have nearly $40 more per month in their pockets next year," Kathleen Sebelius, Secretary of Health and Human Services, told reporters.

Consumer advocates reacted favorably to the announcement. "AARP is pleased that the vast majority of people in Medicare will see a lower-than-projected $3.50 increase in their Part B premiums," said David Certner, AARP's legislative policy director. "Millions of America's seniors are struggling with higher expenses … and this small increase is welcome news." Joe Baker, president of the Medicare Rights Center, described the $22 fall in the Part B deductible as "almost unheard of."

In other changes announced today, the Medicare Part A hospital deductible will increase by $24 to $1,156 in 2012. The Part A premium, which is paid by only the 1 percent of beneficiaries who have not paid sufficient payroll taxes while working, will rise by $1 to $451 a month.