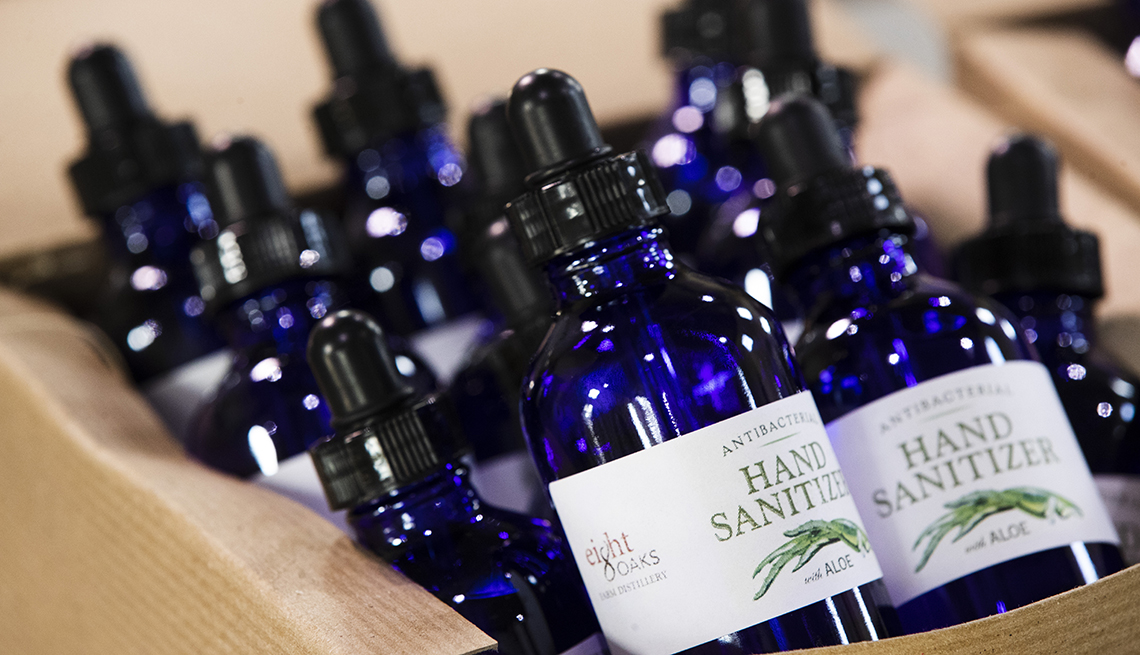 Bottles of hand sanitizer made at the Eight Oaks Farm Distillery in New Tripoli, Pennsylvania.

En español | At one time Scott Jendrek might have been fighting coronavirus from a lab.

A biotechnology veteran, he spent much of his career “making vaccines and therapeutics for phase one and phase two clinical trials.” Three years ago, the longtime homebrewer and spirits aficionado followed a dream and opened Patapsco Distilling in Sykesville, Maryland, producing craft bourbon, gin, rye, vodka and exotic spirits such as blood orangecello and black walnut liqueur.

Now his customers can sample a new product that's very much in demand: hand sanitizer.

Patapsco is among hundreds of craft distilleries nationwide helping alleviate a shortage of alcohol-based hand cleaner, which has almost disappeared from stores as coronavirus grips the nation.

For the latest coronavirus news and advice, go to AARP.org/coronavirus.

"When they sent out the memo that you can cut through all the red tape that's usually required to make hand sanitizer, we figured what the heck, let's do our part,” says Jendrek, referring to a move that the federal Alcohol and Tobacco Tax and Trade Bureau (TTB) made last week.

Washing your hands remains the best way to combat coronavirus infection, but the federal Centers for Disease Control and Prevention recommends hand sanitizer with at least 60 percent alcohol content as a backup when soap and water aren't immediately available.

Ethanol, the primary ingredient in sanitizers such as Purell, is also the type of alcohol used to make spirits. That has given distillers a new use for production lines slowed because bars, restaurants and their own tasting rooms are shuttered. 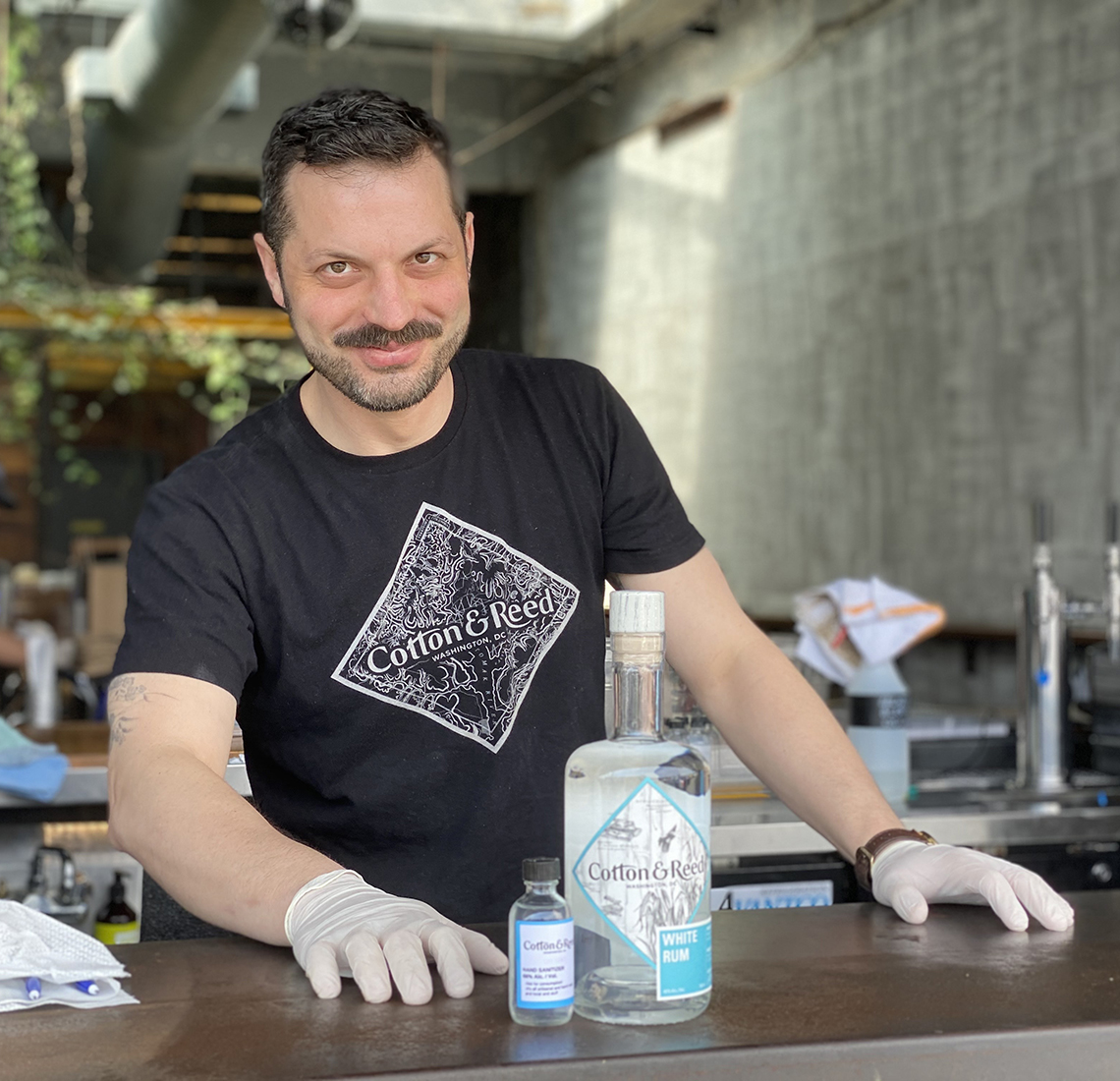 Kyle McNeel, director of operations at Cotton & Reed, shows off one of the Washington, D.C., distillery’s signature rums and its new hand sanitizer.

"The need for one ethanol product basically coincided with the natural decline, in large part, of the market for our core ethanol products,” says co-owner Jordan Cotton of Cotton & Reed, a rum producer in Washington, D.C. “I think pretty much anybody around the country with a distillery had the same bright idea right at the same time."

The federal waiver, issued March 18, will remain in effect until at least June 30.

About 300 distillers are producing hand sanitizer, according to Chris Swonger, president and chief executive of the Distilled Spirits Council of the United States trade group. That includes many of the biggest names in the industry, such as Pernod Ricard and Bacardi, but also small-batch distillers in almost every state.

"Everybody is pivoting to help the community,” he says.

Many made the switch even before the government formally waived production restrictions.

"We had already been doing it a couple of days,” Cotton says. “TTB was being really supportive and flexible by saying, ‘We know everybody's already doing it. We're going to let you do it under your permits for the next couple months.'"

Some distilleries, such as Eight Oaks in New Tripoli, Pennsylvania; Ugly Dog in Chelsea, Michigan; and Catoctin Creek in Purcellville, Virginia, are donating their sanitizer to essential services such as hospitals, senior living facilities and first responders and soliciting public contributions to support the effort.

Most of Cotton & Reed's supply is going to fire and EMT stations in the District of Columbia and to organizations providing groceries and other help to service-industry workers who have lost jobs to the pandemic.

The distiller also is handing out small bottles at its retail shop — where customers can make purchases through a sidewalk-facing window to maintain social distancing, Cotton says.

For other companies, the switch is a means for both community service and economic survival. With a business model that relies on people going out and socializing, “many of these craft distillers are being crushed” by the coronavirus slowdown, Swonger says.

Karrikin Spirits Co., a distiller, brewery and restaurant in Cincinnati, will sell its sanitizer to institutions and agencies providing essential services, including fire departments, hospitals, nursing homes and police.

That's allowing the company to maintain health insurance for its workers, who were laid off en masse after Ohio ordered restaurants and bars to close, and to rehire some for sanitizer production and distribution, marketing director Matt Groves says. 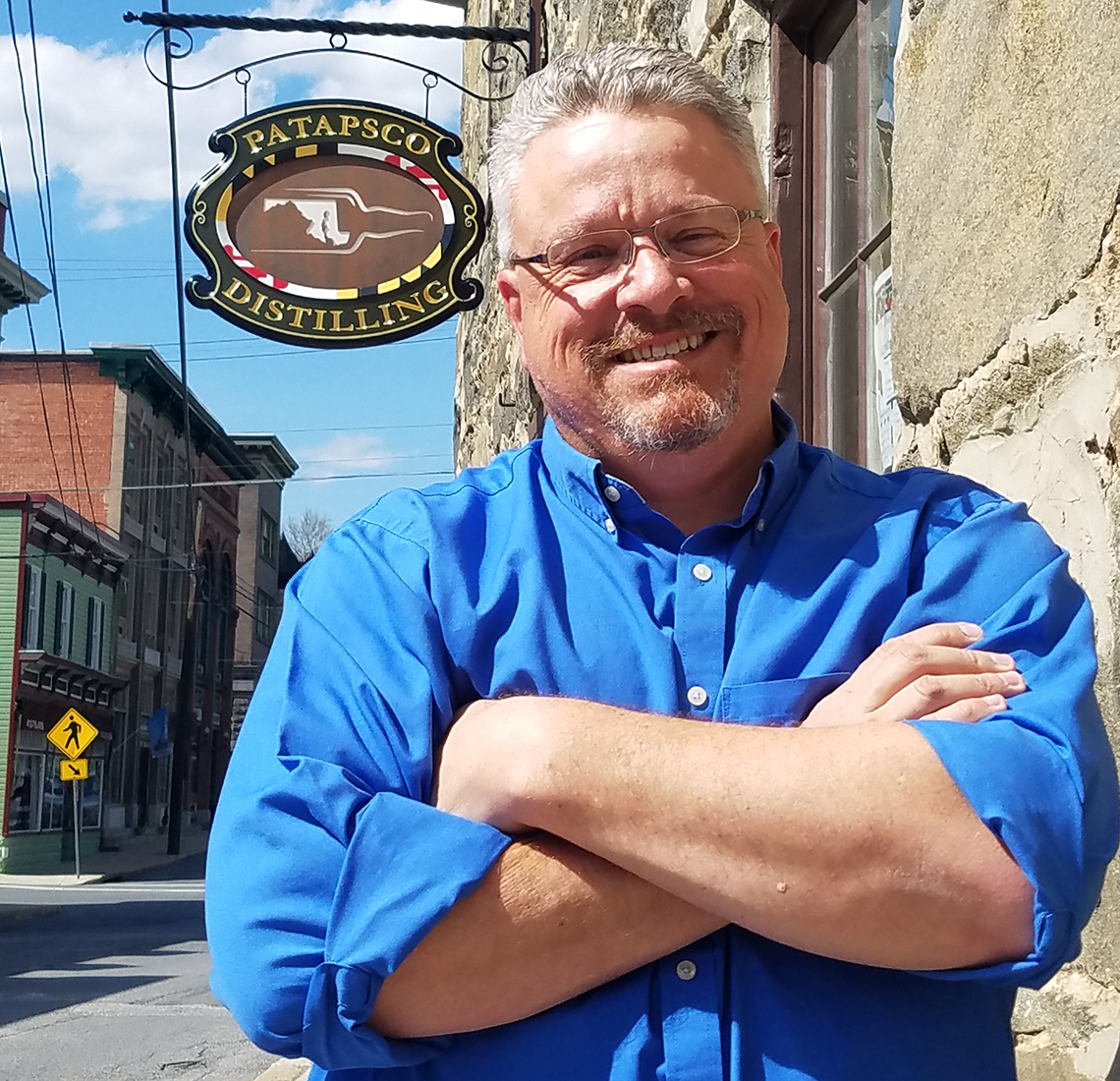 Scott Jendrek started making spirits at Patapsco Distilling after a career in biotechnology.

"When a hospital buys from us, they'll be paying us directly for that, and that money will be put to use for our ultimate goal of putting people back to work, putting a little bit of money in their pockets and making sure they have health care coverage during a public health crisis,” Groves says.

A toast for a vaccine

Jendrek initially planned to make small quantities of Patapsco's sanitizer to give to customers, but high demand prompted him to scale up. Now the bulk of his supply will go to medical facilities in central Maryland via sales to local government health agencies.

"It helps me pay the rent and keep the lights on and not have to lay anybody off,” he says. “It's not like we're going to be gouging the government. We just want to be able to survive."

Production will kick into high gear this week, Jendrek says. He still plans to fill small bottles to give out in and around the distillery, although he warns users that the World Health Organization recipe Patapsco is following is “very liquid-y, not what Americans would consider hand sanitizer."

And he has an invitation to his biotech peers who come up with a treatment that curbs the pandemic.

"After they're successful, come on in,” he says. “I'm gonna pour you a drink."