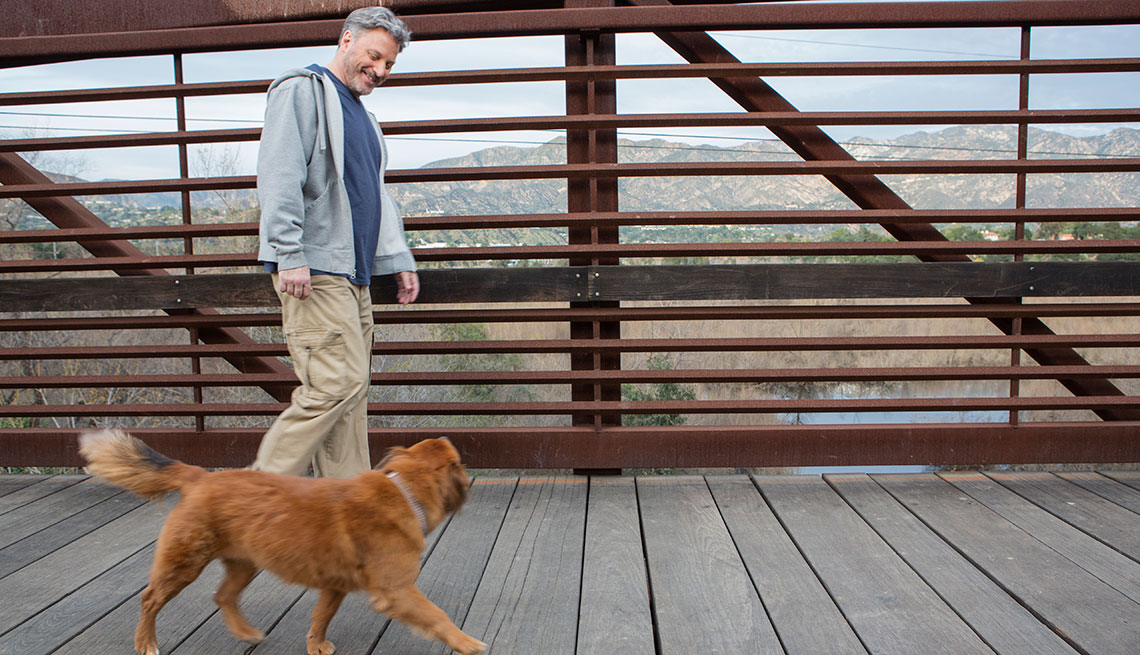 More gentle exercise, such as taking the dog for a walk, could work better for older men, especially if they suffer from arthritis or other joint pain.

Men, if just the thought of climbing on to a cardio machine makes you break out in a sweat, take heart. A new British study finds that even 30 minutes of very light activity each day, such as a gentle stroll, can reduce the risk of early death by 17 percent. The association held up even after taking other lifestyle factors into account.

Federal guidelines for adults typically call for at least 150 minutes a week of moderate to vigorous physical activity in spurts of 10 or more minutes at a time. But researchers from University College London say a gentler type of exercise, such as gardening or taking the dog for a walk, could work better for older men. And this is especially true if they suffer from arthritis or general joint pain.

Researchers also uncovered no evidence to suggest that racking up moderate to vigorous activity in exercise sessions of 10 minutes or more was any better than accumulating it in shorter periods of light activity.

“The results suggest that all activities, however modest, are beneficial,” the researchers wrote. “The findings that [low-intensity physical activity] is associated with lower risk of mortality is especially important among older men, as most of their daily physical activity is of light intensity."

“Furthermore, the pattern of accumulation of physical activity did not appear to alter the associations with mortality, suggesting that it would be beneficial to encourage older men to be active irrespective of bouts,” they continued.

For the study, published last week in the British Journal of Sports Medicine, researchers analyzed data from 7,735 participants from dozens of British towns originally recruited from 1978 to 1980, when they were between age 40 and 59. Then, from 2010 to 2012, the 3,137 surviving participants underwent a physical checkup, which included wearing a gadget to track the volume and intensity of their activity during waking hours for seven days. Their health was monitored until June 2016 or death, whichever came first.

After crunching the numbers, the researchers concluded that each additional 30 minutes of light-intensity exercise a day was associated with a 17 percent reduction in the risk of death. While moderate to vigorous physical activity every day led to an even greater drop in the risk of death — around 33 percent for each additional 30 minutes — the benefits of gentle exercise were substantial enough to mean that this, too, could extend a man’s life.

The researchers issued one caveat: Since the study was an observational one, it’s impossible to determine whether there was cause and effect when it comes to the findings. Also, there’s no indication whether the results would also apply to older women, although the study's authors said it’s likely they would.

The study backs up previous research that linked even smaller doses of exercise with health benefits. A Northwestern University study published in 2017 found that those who engaged in moderate activity such as brisk walking for a minimum of 45 minutes a week were 80 percent more likely to improve or maintain the physical functioning needed for independent living, compared with those who exercised less. This applied to both men and women.