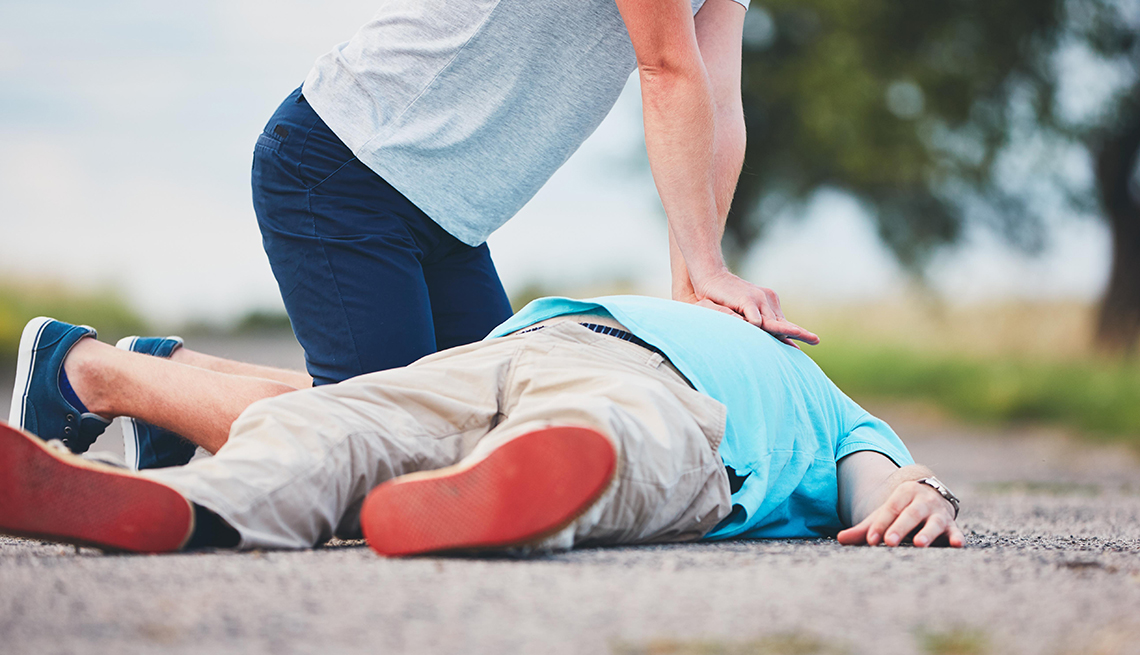 En español | Picture this: A friend or family member grabs her chest, collapses right in front of you, gasps a few times and then lies deathly still. Would you know what to do?

Of course, you would call 911 — most know to do that. But far too many folks then simply wait for help to arrive, says Benjamin S. Abella, M.D., director of the University of Pennsylvania Perelman School of Medicine Center for Resuscitation Science.

Instead, your next step should be starting chest compressions — yes, even if it’s been decades since you took a CPR class (or even if you’ve never been trained at all).

Doing CPR immediately after cardiac arrest can double or triple someone’s chance of survival, according to the American Heart Association (AHA). “If you wait the 10 minutes for the ambulance to show up, it may be too late,” Abella says.

The good news is that CPR (cardiopulmonary resuscitation) is a lot easier than it used to be.

CPR has only been around since 1960. But the AHA has made constant tweaks and changes over the years based upon the latest research and data. Probably the biggest change came in 2008 when the association began recommending that untrained bystanders skip mouth-to-mouth ventilation for adults and only do high-quality chest compressions.

“The old way was too complex,” says Bentley J. Bobrow, M.D., a distinguished professor of emergency medicine at the University of Arizona College of Medicine who helped write the new guidelines. “When people are panicking, it’s hard to remember anything. We tried to make CPR as easy as possible in the hope that more people will be able and willing to do it.”

Only about 46 percent of those who suffered cardiac arrests outside of a hospital in 2017 received bystander CPR, according to the AHA.

Often, people don’t start CPR because they worry about hurting someone or doing it wrong. But the latest research shows that it is very difficult to cause harm through CPR, even if the person doesn’t need it. “The only real way to do it wrong is to not try to do it,” Abella says.

If you want to brush up so that you can feel confident in the event of an emergency, here are five big changes you need to know about:

Don’t wait. Previously, the AHA recommended “looking, listening and feeling” for breathing or pulse before starting CPR. But that was wasting too much time, Bobrow says. A victim’s chance of survival falls 7 to 10 percent for every minute you delay. So the current guidelines advise calling 911 and starting compressions immediately on someone who is unresponsive and not breathing normally. “If it turns out they are not in cardiac arrest — say they’re drunk or they fainted — they will probably just push your hand away. No harm, no foul,” Bobrow says.

Send someone to look for an AED. If you’re in a public place, direct any onlookers to search for an automated external defibrillator (AED) while you start compressions. These days, AEDs are widely available in airports, health clubs, shopping centers, apartment buildings, workplaces and more, and science shows they significantly boost survival rates. “Even if you’ve never seen an AED, as soon as you take it out of its case, it will talk to you and walk you through how to apply it to a patient and save a life,” Abella says. Using one is as simple as placing pads on someone’s chest, then standing clear before you press the “analyze” and then “shock” buttons to (1) let the device test someone’s heartbeat, and (2) deliver a shock if needed.

No more mouth-to-mouth. This is by far the biggest change in recent years. The AHA began recommending “hands-only CPR” for untrained bystanders after several studies showed that cardiac patients did as well or better when they got hands-only CPR compared with the traditional version with breaths. “Every time you stop compressions to deliver breaths, you have no blood flow, and those pauses in blood flow are a problem,” Abella says. The AHA still recommends CPR with breaths for infants and children, victims of drowning or drug overdose, or people who are having a severe asthma attack. But Abella notes that the vast majority of older Americans who collapse are having an immediate electrical problem with their heart, not a respiratory problem. And what they need most are compressions to circulate blood flow to the brain.

Push harder. Until recently, the AHA recommended pushing one-and-a-half to two inches into the chest. The new recommended depth for adults is at least two inches. For most people, that means pushing downward as hard as you can. “It would be highly unlikely to push too hard,” Abella says. “To be effective, you need to use a little bit more elbow grease.” Because CPR is tiring, if there are others around, switch off every two to three minutes.

How to perform basic hands-only CPR