In the long debate over whether Americans should eat less salt, the American Heart Association has long been adamant: If we want to cut our risk of heart disease, we need to cut back on the amount of sodium we consume. 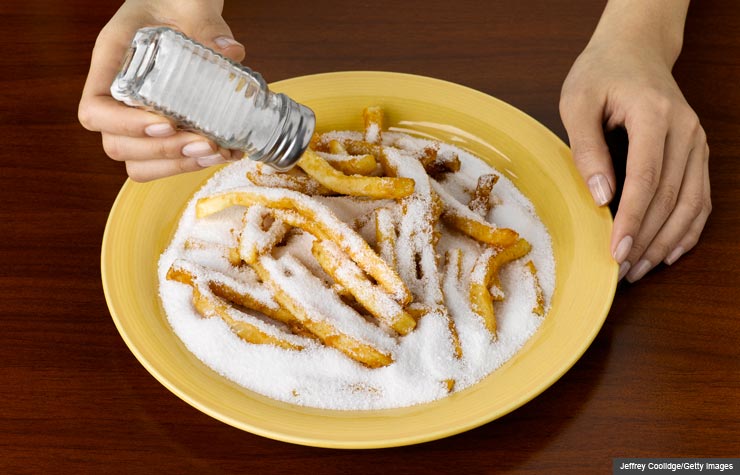 How much salt is too much?

But in recent years, some scientists have questioned that recommendation, citing new research showing inconsistent and even paradoxical effects on blood pressure and cardiovascular disease when dietary sodium is reduced.

The analysis, published in the journal Circulation, found significant weaknesses in much of the recent research, in how it was both conducted and interpreted. None of the more recent studies "are really up to snuff," says lead author Paul K. Whelton, M.D., the Show Chwan Professor of Global Public Health at Tulane University. In the panel's view, the Heart Association's 2011 recommended sodium level still stands as the best advice for Americans' health.

In the debate over sodium, everyone concurs that it is an essential mineral, its concentration in the blood closely regulated by the kidneys. They even all agree that ingesting too much salt can be dangerous. The bone of contention is how much is too much.

According to the Heart Association, 97 percent of Americans are getting more than twice the amount they should be getting, and our average daily intake of more than 3,400 mg contributes to cardiovascular disease, stroke, kidney stones, asthma, osteoporosis and gastric cancer. Most of our daily salt comes from packaged foods, which use it as a flavor enhancer and preservative, and not from salt added during cooking or at the table.

Although the federal government's 2010 dietary guidelines called for adults 51 and older or those who have high blood pressure, diabetes or kidney disease to limit their sodium intake to 1,500 mg daily, the Heart Association disagreed and announced last year that all Americans, not just older adults, should stick to that 1,500 mg limit.

However, the six new studies suggested that the Heart Association's target may be too low for some people, says Michael Alderman, M.D., an emeritus professor at the Albert Einstein College of Medicine in New York and editor of the American Journal of Hypertension. In 2011, for instance, European researchers reported in the Journal of the American Medical Association that, of 3,681 people they had followed for eight years, those who ate the least sodium were the most likely to die.

But the Heart Association panel says this study and others are flawed: Some were conducted on people who were already sick, and others used imprecise methods for measuring sodium intake. For this reason, Whelton stands behind the association's guidelines and recommends that people reduce their sodium intake.

Alderman, who has served as an unpaid adviser to the Salt Institute, a trade group for salt companies, takes a different tack. He believes that both very low and very high levels of salt consumption are unhealthy.

Plus, he notes, the debate over whether 1,500 mg a day is too low may never be settled. That's because the ideal level of salt consumption can't really be determined until scientists can conduct a randomized, controlled trial — the gold standard for research — that directly compares the health outcomes for people on high- versus low-sodium diets.

Heart Association proponent Whelton agrees that the chances of a large, long expensive trial like that being done are "slim to none."