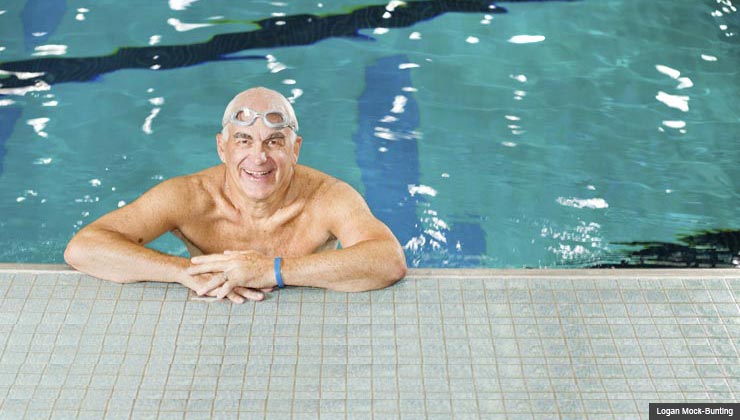 Swimming and other forms of exercise can greatly reduce your cardiac risk.

En español | I am a statistic today, one of 1.4 million Americans who will suffer a heart attack this year. More important, I'm one of the million who will survive.

Here's how. I'm an active 70-year-old. On the cardiac risk chart, I'm on the margins. I do not have diabetes or high blood pressure. I am not obese. My cholesterol levels are under control. My genes do pose a problem: My dad died of a heart attack and brittle arteries at 66. To counter that, I've been swimming three or four times a week for more than 25 years.

With extra training, I was ready for a one-mile race in the Chesapeake Bay. It was relatively uneventful, though I swam faster than usual and my sense of direction was oddly askew — I spent more time heading for the Azores than Annapolis! An hour later, after collecting a third-place trophy and changing clothes, I became light-headed and felt a heavy pressure on my chest. My wife was right: It was more serious than I thought, and I needed help. There began an odyssey through the public health system, and at every stop — the EMS tech, the ER orderly, the ER docs and nurse-practitioner, the nurses and cardiac specialists — their verdict was unanimous. Swimming had saved my life.

From past AARP Bulletin articles, I know the importance of speedy attention and recognized the coordinated care I was getting. The ambulance was equipped with an electrocardiogram machine that transmitted a dozen tracks of my heart rhythm directly to the Anne Arundel Medical Center's emergency room

The ER greeting was harsh: "You've had a heart attack." The mobile EKG was the first indicator, elevated troponin levels in the blood tests confirmed it, and a catheterization was scheduled for early the next morning.

Strapped to the gurney, I asked the surgeon if he utilized "The Checklist." In a recent story about reducing hospital errors, we quoted Atul Gawande, M.D., a surgeon and advocate of a checklist — a pre-operation pause for workers in the operating room to introduce themselves one by one and describe their tasks.

It works for aviation and high-rise construction, Gawande argues, so why not in operating rooms? And, I now asked my surgeon, how about my operating room? "We do a time-out," he replied, in which he introduces himself to the team, introduces the patient and describes the scheduled procedure.

Not quite the same, but I was in no position to argue, and we proceeded with the time-out, followed by the left heart catheterization, an examination of the arteries and the left ventricle. He found that plaque had ruptured and clogged an artery, disrupting blood flow to the heart. But just as quickly, blood had clotted, sealing the rupture, and the artery had reopened.

Unexpectedly, my surgeon also found no blocked arteries and no need for stents — a credit to my exercise routine. Damage to the heart was limited and would naturally repair.

In the days since, the message has been even clearer: Exercise at any age is important. From friends, there was joy and good humor. "If I was a heart and someone threw me into the Chesapeake Bay, I'd protest, too," said one. Doctors loaded me with medicine — to control cholesterol, lower blood pressure, stabilize the heartbeat and thin the blood. And the advice they offered was simple — "Get back into the pool."