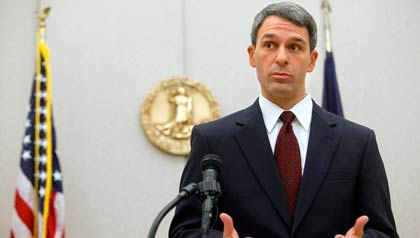 Virginia Attorney General Kenneth Cuccinelli is challenging the constitutionality of the new health care law. "This lawsuit is not about health care. It is about liberty," he said.

En Español | A Virginia judge's ruling Monday striking down a specific aspect of the health care reform law is unlikely to have any immediate impact.

While U.S. Eastern District Court Judge Henry E. Hudson ruled unconstitutional the law's requirement that, effective in 2014, all Americans purchase a minimum level of health insurance or pay a tax for being uninsured, he did not block implementation of the new health care law, portions of which are currently in effect.

And two other courts have upheld the law — giving further credence to Hudson’s observation, in his ruling, that "the final word will undoubtedly reside with a higher court," he wrote.

The ruling was celebrated by Virginia Attorney General Kenneth T. Cuccinelli II, who said in a release "I have said all along that this lawsuit is not about health care. It is about liberty. At the same time, I understand that people want more affordable health care, and I sympathize with people who honestly can’t afford it. But as someone who has sworn to uphold the law, I cannot endorse taking away the rights of all so that government can provide health care to some."

Proponents of the health care reform legislation seemed relatively unconcerned by the ruling. They point out that Hudson's is just one opinion against the mandate, and that his ruling and the case did not challenge benefits of the law that are now in place, such as the new right of young adults under age 26 to remain on their parent's health insurance policies, rules that prohibit insurers from denying coverage to children with pre-existing conditions as well as from dropping people once they become sick.

"We’re confident that when it's all said and done, the courts will find the Affordable Care Act constitutional," said White House special assistant Stephanie Cutter in a statement on Monday. "History and the facts are on our side.  Similar legal challenges to major new laws — including the Social Security Act, the Civil Rights Act, and the Voting Rights Act — were all filed and all failed."