Raymond Reid, 67, of Portland, Maine, was overweight and suffering from high blood pressure when his doctor told him it was time to get serious about exercising. Reluctant to jump into a vigorous exercise program, Reid instead signed up for a class in T'ai Chi Chih (pronounced tie chee chuh), a mix of meditation and movement that focuses on balance and the circulation of energy known in Chinese philosophy as chi. T'ai Chi Chih is a variation of tai chi but simpler: Tai chi consists of 108 movements, while T'ai Chi Chih has 19 stand-alone movements and one pose. "I loved the simplicity of it," says Reid, a retired pastry chef who is now a certified T'ai Chi Chih instructor. Within six months, Reid lost 38 pounds, normalized his blood pressure, and, with his doctor's blessing, cut his medication in half.

Known to its practitioners as "the effort of no effort," T'ai Chi Chih was developed in 1974 by tai chi master Justin Stone as a gentler form of Tai chi for older students. It's easy to learn and offers benefits beyond fitness: A University of Wisconsin – LaCrosse study found that older adults who practiced T'ai Chi Chih for five weeks experienced less stress and greater well-being. 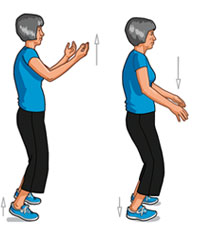 Stand with feet parallel, arms at your sides. Raise your arms slowly, palms up, while simultaneously rising on the balls of your feet. Then lower your arms, palms down, while letting your heels touch down and raising your toes slightly. Repeat 9, 18, or 36 times. 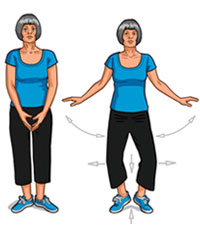 Stand with heels together and toes splayed, palms facing each other below waist, fingertips down. Flap your arms while bending knees and raising heels. Return to original position and repeat the exercise. The third time, after flapping arms, move wrists in circular motion 1 1/2 times before returning to the starting position. 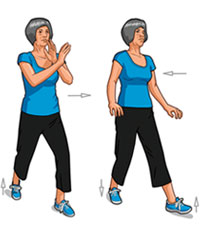 Step forward with left foot, hands at sides, palms up. As your weight shifts forward to your bent left leg, swing hands slowly in circular motion in front of you, crossing your wrists. With your weight fully forward, straighten right leg and raise right heel. Then shift back and repeat with other leg. Do 9, 18, or 36 times.