Q. My wife and I have a serious problem related to her use of Ativan. We are both in our mid-60s, and she's been tied down for several years taking care of her mother, who has Alzheimer's disease. She started off taking a 0.5mg tablet of Ativan, which her doctor prescribed on an "as needed" basis for episodes of anxiety, once a day. But over time, she's moved into taking the Ativan five or six times a day. She realizes she's developed a serious dependency on the drug and wants to stop, but her efforts to quit or taper off have all ended in failure. 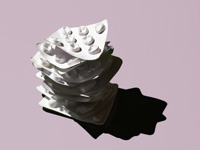 Anxiety and other symptoms may arise when quitting Ativan.

It's become very difficult for me to deal with her panic attacks, mood swings and insomnia. What can I do to help her get off this drug?

A. I see many older couples in exactly this situation, and I sympathize with all that you both must be going through. Lorazepam (Ativan) is one of the most addictive short-acting benzodiazepines, a category of drugs that includes alprazolam (Xanax), clonazepam (Klonopin), estazolam (ProSom), oxazepam (Serax) and triazolam (Halcion). When the central nervous system and muscles cry out for the drug and it's not there, people can experience anxiety, agitation, mania, muscle cramps, nausea and vomiting, among other uncomfortable withdrawal symptoms.

Ativan is metabolized in the liver and works on the brain neurotransmitters that control anxiety and muscle relaxation and contractions. Because the liver stops making some of the isozymes that metabolize drugs as you grow older, benzodiazepines can accumulate to toxic levels in the bodies of older adults, causing unsteadiness and dizziness, increasing the risk of falls and fractures.

Be sure your wife speaks with her doctor or other health care professional before starting the withdrawal process. He or she needs to know she's trying to wean yourself from the drug and should be involved throughout the process.

Her doctor may also discuss whether it makes sense for your wife to have a background drug therapy in place as sort of a cushion against the anxiety and other symptoms that will likely arise during withdrawal. Doctors often prescribe selective serotonin/norepinephrine reuptake inhibitors (SSRI/SNRIs), phased in over a couple weeks, for this purpose. Of the drugs in this category, I find venlafaxine to have the lowest adverse-event profile in older patients and to be easier to dose to a therapeutic level. Additionally, its availability in extended-release form offers advantages in improving sleep and relaxation during the trying times of the benzodiazepine reduction.

If your wife has moved into taking five or six half-milligram tablets of Ativan a day, the tapering-off process could well take four to six months — plus a lot of willpower on her part.

The doctor may recommend that your wife step the Ativan down in stages of just 0.25mg and stick with each stage for 15 to 30 days to minimize withdrawal symptoms. Your wife should be able to see with the first taper whether 15 days is sufficient or she needs to extend it to 30 days.

If at any point along the way your wife becomes too uncomfortable, she should ask her doctor doctor about going back to the dose used during the last successful taper and waiting 15 days before again trying the next lower dose.

How long your wife continues the SSRI/SNRI — if indeed she opts for it — after successfully withdrawing from the benzodiazepine depends on her anxiety level. But I recommend reevaluating the situation at least every 90 days.

Ask the Pharmacist is written by Armon B. Neel Jr., PharmD, CGP, in collaboration with journalist Bill Hogan. They are coauthors of Are Your Prescriptions Killing You?, which was published in July by Atria Books.

Information contained in the Ask the Pharmacist column by Dr. Armon B. Neel Jr. is intended to help individuals and their families become more informed about medication usage and interactions, and be better health care consumers. Any advice or information provided should not be followed in lieu of a personal consultation with a trained medical professional.