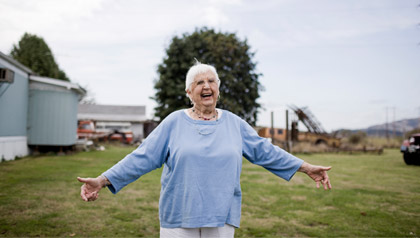 Isabelle Fletcher never took a pill until she was 82. That's when her doctor prescribed a blood pressure medication that cost $62.40 a month. A few years later came eyedrops for her glaucoma, priced at $200 a month.

Fletcher, a widow with a monthly income of $1,200, said she wouldn't have been able to afford both medications without the Oregon Prescription Drug Program.

"It helped me immensely, not only financially but in terms of my peace of mind," said Fletcher, now 87, of Pleasant Hill. She pays $25 a month for the blood pressure medicine and $89 a month for her eyedrops. "I don't have to worry. I know I'm one of thousands the program has helped."

The Oregon Prescription Drug Program (OPDP) is a discount card program, not a benefit program. People can apply for it, receive a discount card and then are able to pay for drugs at a discounted rate negotiated by a pharmacy benefits manager on behalf of the state.

The program — which has expanded into an Oregon-Washington consortium — has no cost to the state, so individuals don't have to pay premiums to join. Sixty cents of each prescription goes toward operating costs.

The first, limited version of the OPDP launched in 2005 with rigid entry criteria — individuals had to be at least 55 with a low income and no private drug coverage for at least six months.

In 2006, AARP Oregon and then-state Sen. Bill Morrisette, D-Springfield, sponsored Measure 44, a ballot initiative that expanded the program to all state residents regardless of age, income or insurance status. It passed overwhelmingly.

Before the initiative passed, fewer than 5,000 people were enrolled in the program. A year later, with AARP strongly urging enrollment, that number jumped to over 55,700. Now it covers 378,000 Oregonians.

"It's pocketbook peace of mind," said Jerry Cohen, AARP Oregon state director. "People shouldn't be in the position of having to decide between, 'Do I pay my utilities, pay for meals, pay my rent or get my meds?' "

Enrolling in the program is simple: Residents can fill out an application online and receive an enrollment card in the mail a week later. They also can apply by mail or by calling 1-800-913-4146. Most pharmacies in Oregon accept the cards.

The discounts are so steep because the program's expansion gave the state more leverage to negotiate for lower prices.

Dolan encourages people who have drug coverage through Medicare Part D to compare the prices they pay against those offered by the OPDP, so they can save as much as possible on their medication.

Dolan said that pharmacists have been "some of our greatest advocates" in spreading the word about the discount program. With more affordable prescriptions, patients are less likely to skip or modify their doses. "It's very important for people to be compliant with their medications," she said.

Although a survey last year found nine of 10 people who use the program are satisfied with it and would recommend it to others, only about a third of the more than 600,000 Oregonians who are uninsured participate in the drug program, Dolan said.

Kim Hubbell, 59, of suburban Portland, worked as a real estate assistant for three years without health insurance. When her doctor recently prescribed two medications, a friend told her about the program, which allows her to buy both prescriptions for less than $15 a month.

"I hope the word gets out so people can take advantage of this," Hubbell said.

Also of interest: Don't miss out on drug savings. >>

Lisa Grace Lednicer is a writer based in Portland, Ore.