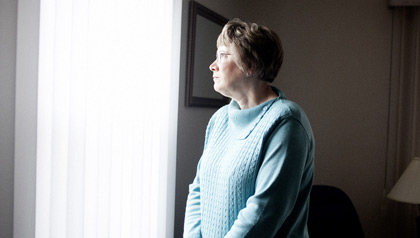 Teresa Story, of Muncie, was appalled at the shortage of staff during her parents' stays in three Indiana nursing homes. Federal rankings indicate Indiana has the most poorly performing nursing homes in the country.

AARP Indiana's plan to improve nursing home quality requires your voice and support. Please tell us whether you can support our plan with online advocacy or personal contact with your state legislators. Also, please submit your, or a loved one's, nursing home experiences to aarp.org/qualitycare.

Her father was in two homes. In the first facility, two certified nursing assistants sometimes cared for 20 or more dementia patients, several of whom were physically incapacitated, as he was. The second home was not only understaffed, but didn't provide adequate end-of-life care.

"I was just appalled at the lack of attention and care he received as he was dying. I had to ask for everything," she said. Glynson had "horrific pressure sores" when he died in 2006.

When her mother was admitted to a nursing home in 2009, no health care professional did an assessment, Teresa said. At one point, she found her mother unresponsive and had her admitted to a hospital in a coma. Hospital staff told Teresa they'd never seen such severe dehydration. Teresa questions how the nursing home staff could have overlooked Evelyn's condition.

In 2009, Indiana had more poorly performing nursing homes, 52, than any other state, according to a U.S. Government Accountability Office report. The federal Centers for Medicare & Medicaid Services (CMS) found only 57 of Indiana's 500-plus nursing homes without deficiencies. Forty-six were cited for immediate jeopardy, meaning residents had been seriously injured, harmed or had died.

Robyn Grant, former long-term care policy director for United Senior Action of Indiana, said residents and families repeatedly report that staffing is "often not enough to meet even the most basic needs." Indiana's requirement? Facilities must have "sufficient" staffing to meet residents' needs.

Indiana nursing homes average 2.9 hours of direct nursing care (which includes all levels of nursing staff except the director of nursing) per resident per day. A CMS study found that care for less than 4.1 hours, including at least 45 minutes of care by a registered nurse, raises the chance of malnutrition, dehydration, pressure ulcers and hospitalization.

To solve care problems, United Senior Action has called for numerous reforms including:

All are measures AARP hopes to see adopted by the state. AARP is also hoping the legislature will pass a bill that would require a nationwide criminal background check for many workers in medical fields — including nursing home workers — seeking a state license.

The Indiana State Health Department and trade groups have been working to improve conditions and have seen some success. By September, the number of CMS immediate jeopardy citations dropped from 46 to 25 and the number of facilities without deficiencies rose from 57 to 66, according to Terry Whitson, state health department assistant commissioner.

The Indiana University School of Public Health is in the early stages of developing a curriculum in long-term care administration, in cooperation with nursing home trade groups, said Scott Tittle, president of the Indiana Health Care Association.

Families encountering problems in Indiana nursing homes have resources inside and outside the facility for help. Here is a sampling, from the United Senior Action Foundation.

Outside sources of help:

Rosalyn Demaree is a freelance writer living in Atlanta, Ind.