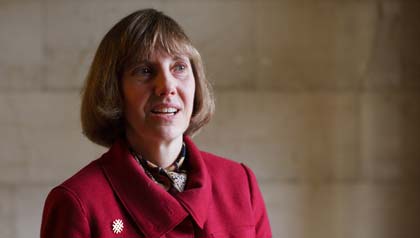 Susan Tolle, M.D., director of the Center for Ethics in Health Care at Oregon Health & Science University, urges those near the end of life or with a terminal illness to fill out a POLST form.

Ethelyn DeMonnin lived in her three-story home in northeast Portland until she was 84. But in early 2008, she had a stroke and fell. Because she needed round-the-clock care, her family moved DeMonnin into an adult foster care home.

Her physician thought one piece was missing: an order for her end-of-life care. DeMonnin had always said she didn't want to be kept alive by artificial means. Such an order, made in consultation with DeMonnin and her family and recorded on a standardized form, would tell first responders what to do — and just as important — what not to do.

In the end, the form wasn't needed. DeMonnin died peacefully in October 2009, eight weeks after another fall. But her family is glad the form was there — just in case. "It promotes the dignity of the patient," said daughter Charlyne DeMonnin. "It's also comforting because it takes the decision out of [the family's] hands."

Physician Orders for Life-Sustaining Treatment — known as POLST forms — aim to guarantee that patients get the kind of care they want if they become incapacitated. The system, now based at Oregon Health & Science University, began in Oregon in the 1990s in response to studies of end-of-life care.

"People were getting more treatment at the end of life than they would have wanted," said Susan Tolle, M.D., an OHSU internal medicine physician and a member of the original task force that developed the system.

Oregon is one of 34 states that either have a POLST system or are developing one. Some states, like New York, use the term MOLST, for Medical Orders.

Published last year in the Journal of the American Geriatrics Society, a study looked at 870 cases in nursing homes in Oregon, West Virginia and Wisconsin. It found that medical personnel followed POLST orders 94 percent of the time. The only weak link was the "no feeding tube" order, with medical staff following the POLST direction on that only about 64 percent of the time.

"It's not perfect, but it's far more effective in assuring that patient wishes are respected than anything else," Tolle said.

Participating in the system is voluntary. "You can change your mind at any time, and you can mark it any way you want to," Tolle said.

POLST is not recommended for everyone: It's only meant for those near the end of life or who are in the advanced stages of an illness.

The form, which must be obtained from and signed by a doctor, physician assistant or nurse practitioner, is bright pink for visibility and contains boxes the patient can check off for various treatments. Unlike other documents specifying end-of-life care, POLST covers a range of treatments, from CPR to comfort care, making it comprehensive and clear. The original form stays with the patient; copies are kept by the medical professional.

In the past, first responders struggled to decipher various end-of-life forms to determine what the patient wanted.

"It was a nightmare," said Steve DeHart, EMS coordinator for the Lake Oswego Fire Department. "I remember many occasions having to read through multiple pages to determine what the patient wanted."

With POLST, they know — and quickly.

In December 2009, an electronic registry was created as a backup so that medical staff could access the form even when the hard copy is not readily available. About 77,000 POLST forms have been submitted to the registry. The digital version is available to emergency responders around the clock with one call, and more than 900 calls have been made.

"We're very cautious to make sure we give the right information," said Terri Schmidt, M.D., director of the registry.

The system is still being tweaked to make it more efficient. The Oregon POLST Task Force collects feedback and revises the form every two years. A pilot program now under way at Providence Health System clinics statewide is testing electronic submission of the forms, which are now keyed in by hand.

"There's been a lot of thought put into it," said Joyce DeMonnin, another of Ethelyn's daughters, who is the outreach director for AARP Oregon. "They've been very respectful of patients and done careful research to make this a user-friendly tool."

Also of interest: Questions for caregivers to ask the doctor. >>

Lynne Terry is a freelance writer based in Portland, Ore.