Perimenopausal Women May Be at Risk for Depression 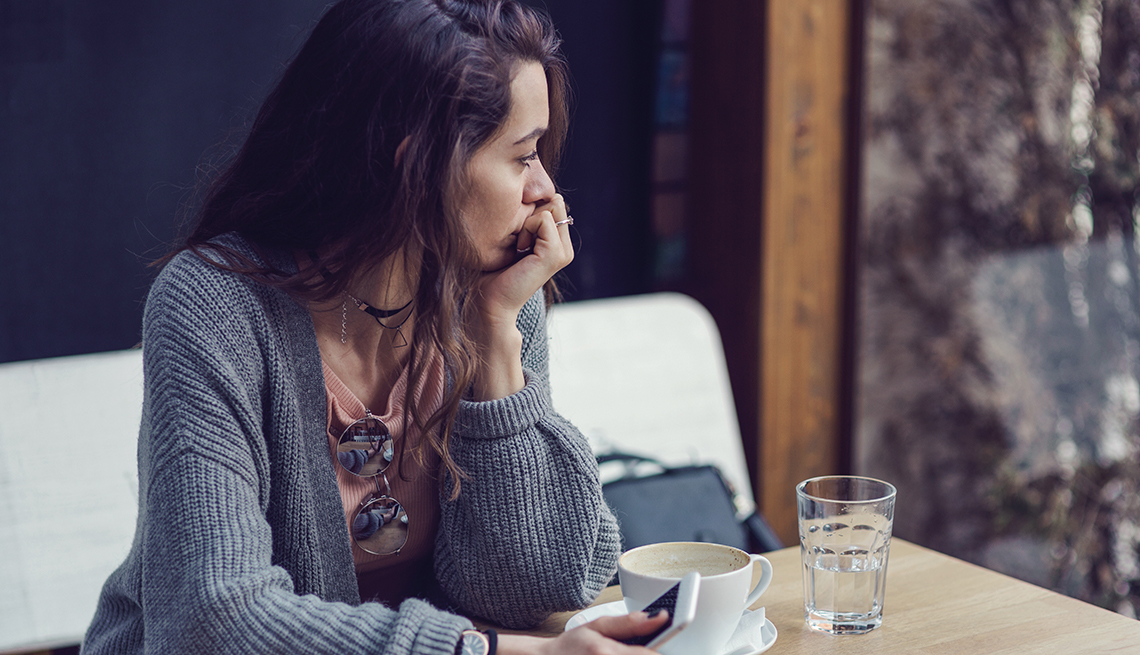 Janice Markey, 50, of Newtown, Conn﻿ecticut, had always stayed in shape by working out. She even taught exercise classes. Four years ago, when she started feeling listless and fatigued, she was concerned. “I noticed something was wrong because I was always athletic﻿, and it was suddenly very difficult to run,” Markey﻿ says.

​Her body was also starting to change. Markey started missing periods and having bad headaches. She also ached all over at times and was becoming “horribly sad﻿."

When she began to have suicidal thoughts, ﻿Markey finally saw a psychologist and then a psychiatrist, who diagnosed her with clinical depression. “I went from being a major outgoing personality to being miserable,” she says.

Markey is not alone. Women are almost twice as likely as men to have depression due to genetic, biologic﻿al and environmental factors. (For more on women and depression, see our story.)﻿ ﻿

﻿But now there is mounting evidence that during the two- to -eight -year period before menopause, known as perimenopause, and possibly even afterward, women can be at a higher risk of developing clinical depression.

In one of the most recent studies﻿ about perimenopause and depression, published in﻿ the journal Menopause in September 2020, researchers found ﻿that in a survey of 485 Turkish women﻿,﻿ ages 35 to 78, who were going through perimenopause and menopause, 41 percent reported experiencing some form of depression.

And in a study of 50 perimenopausal women with mild to moderate depressive symptoms published in The Journal of Clinical Endocrinology & Metabolism in November 2019,  researchers found that the more varied these women’s estrogen levels were in the absence of progesterone, the higher their level of depression.

Women with a history of depression appear to be at a particularly increased risk of perimenopausal depression.

Peter Schmidt, M.D., chief of the section on behavioral endocrinology at the National Institute of Mental Health in Bethesda, M﻿aryland, believes as many as 10 to 20 percent of women may be affected by perimenopausal depression. Schmidt has been studying the phenomenon and is currently leading a clinical trial for a potential treatment﻿. (﻿See sidebar for more information﻿.)

Perimenopause, which means "around menopause," according to the Mayo Clinic, "refers to the time during which your body makes the natural transition to menopause, marking the end of the reproductive years." Sometimes referred to as "menopausal transition," this is when estrogen levels flu﻿ctuate, your period may be irregular, and symptoms like hot flashes, depression and anxiety can begin.

Menopause occurs when you've gone 12 months without a period. Most women experience menopause between ages 40 and 58; the average age is 51, according to the nonprofit North American Menopause Society. Now you enter the phase known as postmenopause.

Their symptoms of perimenopause can be mild, moderate or disabling﻿, like they were in Markey’s case, and can include feelings of hopelessness, fatigue, moving or talking more slowly, feeling restless or having trouble sitting still, thoughts of death or suicide, suicide attempts﻿, ﻿andaches or pains, headaches, cramps or digestive problems without a clear physical cause and/or that do not ease even with treatment, according to the National Institute of Mental Health﻿. The NIMH notes that if you experience such symptoms (among others) for most of the day﻿, nearly every day﻿, for at least two weeks, you may be depressed.

But sometimes perimenopausal depression goes undiagnosed because the symptoms may be atypical, Schmidt﻿ says. ﻿Women might have common symptoms such as fatigue and hopelessness, but ﻿they might also become anxious, for instance.

“Perimenopausal depression is often associated with excessive worry and rumination and physical changes and excessive tearfulness. Even commercials can set them off. It﻿ is annoying if it’s happening regularly and can also be marked by anxiety and sleep disturbances,” he notes.

It can be scary when such symptoms come on suddenly, with no apparent trigger. Omisade Burney-Scott, 54, of Durham, N﻿orth C﻿arolina, says she has had episodic depression throughout her life, especially after each of her parents died. “It was associated with grief,' she says. She was surprised when her depression returned right before her 50th birthday, when she wasn’t struggling with any particular challenges in her life — besides perimenopause.

“I thought I was dying. I thought I was sick with cancer. I lost 30 pounds in three months,” Burney-Scott says. She adds that she was also tired, had no appetite, “had a lot of brain fog and was forgetting things and missing appointments sometimes.” She began taking antidepressants, took time off from her job at a nonprofit health foundation and started seeing a therapist every week. “The thing about Black people is that we don’t talk about mental health﻿. ﻿But the stigma around menopause and depression creates such high levels of harm,” Burney-Scott notes. "Now I am in a better place."

No woman should suffer through perimenopausal depression, says ​Stephanie Faubion, M.D., medical director of the North American Menopause Society (NAMS) and director of the Mayo Clinic Center for Women’s Health in Jacksonville, Fl﻿orida. “All doctors taking care of midlife women need to be screening for depression,” she notes. “Asking a woman if they are struggling with their mood should be the first question.”

The good news is that “there’s no reason to believe that anything that treats depression at other stages of life won’t treat this,” says Hadine Joffe, M.D., vice chair for ﻿academic and faculty affairs﻿ in the department of psychiatry at Brigham and Women’s Hospital in Boston. “They will.” That might include antidepressants or cognitive behavioral therapy﻿ — or both.

And time will help, Joffe adds﻿. “Once the brain settles and their hormones become low and stable, the risk of depression goes away.”

Participate in a New Study

A clinical trial on perimenopausal depression is underway at the National Institutes of Health (NIH) in Bethesda, Maryland, ﻿to test the safety and side effects of a new drug compound called a selective estrogen receptor modular (SERM). The SERM attaches to a special estrogen receptor that’s normally activated by the sex hormone estrogen, says ﻿Peter Schmidt, ﻿M.D., ﻿of the National Institute of Mental Health, who’s leading the trial. By acting as an impost﻿or for the estrogen lost during perimenopause, the hope is that this SERM will not only reduce perimenopausal depression, as well as anxiety, but have fewer side effects than conventional hormone replacement therapy.

﻿﻿For more information about the clinical trial ﻿on perimenopausal depression﻿, call the NIH office of patient recruitment at 301-496-9576.