As vaccines go into millions of arms, infectious disease experts consider what may happen to the virus in the long term 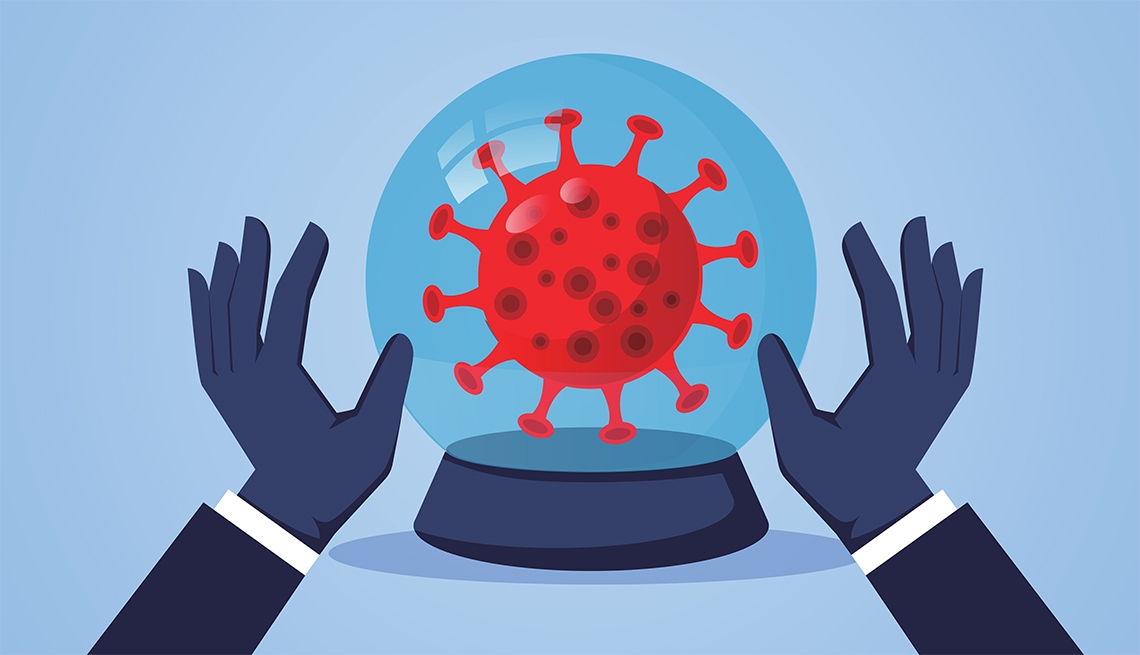 How many times in the past year have you used the phrase “when COVID is over…"? Unfortunately, while COVID-19 may well become a less serious threat, a future free of the coronavirus isn't on the near horizon, experts say — even with a vaccine. “We're pretty sure that this virus is something we're going to have to live with for the foreseeable future,” says William Schaffner, M.D., professor of infectious diseases at Vanderbilt University Medical Center.

Why COVID-19 is likely here to stay

History shows that it's nearly impossible to eradicate any infectious disease, says John Wherry, director of the Institute for Immunology at the University of Pennsylvania. Humans have only managed to do it once, with smallpox. Other viral diseases, like measles, have been nearly eliminated in the U.S. through vaccination, because the shots induce something called “sterilizing immunity.” That means that vaccinated people can't get infected or spread the disease.

That's not the case with COVID-19, says Clare Rock, M.D., associate professor of medicine in the Division of Infectious Diseases at Johns Hopkins School of Medicine. As she explains, both the COVID and influenza vaccines “don't produce that sterilizing immunity, which means people can still get mild infections. Although we still don't know whether they can pass infections on to others.” The COVID-19 vaccine has been shown to be highly effective at preventing illness and protecting people from serious complications or hospitalization. So a major downtick in deaths and hospitalizations is expected as more and more people roll up their sleeves. Still, “this is not a vaccine that's going to eradicate COVID,” Rock says.

And there are other factors, like how many people choose to get vaccinated or whether variants of the virus emerge that are resistant to the vaccines, which could influence the persistence of the disease. Every time the virus spreads from person to person, it accumulates changes in its genetic code.

"More virus replication leads to more variants,” Wherry says. “The vast majority of those variants are dead ends, but you're playing a game of Russian roulette. The more bullets there are in the gun, the more likely something bad is going to happen.” The big worry, of course, is that a variant arrives that can bypass vaccine-induced immunity.

What the Spanish flu tells us

After sweeping the globe for more than a year, COVID-19 won't just disappear. But it could eventually evolve into something more similar to the flu or even the common cold, Wherry says, although that could take years, decades or more.

The last major pandemic, which took place a century ago, could offer a few hints. In 1918 and 1919, the Spanish flu killed at least 50 million people around the globe (so far, COVID-19 has killed fewer than 3 million people worldwide). The virus finally receded mainly because much of the world's population had already been exposed and developed immunity or died. But although the pandemic ended, the virus never really went away. In fact, descendants of the 1918 flu virus caused deadly outbreaks in 1957, 1968 and 2009.

"The 1918 virus accumulated many changes over the years, and there are still genetic remnants in the H1N1 viral strain out there today,” Schaffner says. “It's like generations of people. A little bit of your great-great-grandfather's genes are in you, so the current influenza virus has some of its great-great-grandparents’ flu genes.”

Likewise, SARS-CoV-2, the virus that causes COVID-19, has already begun to mutate. The question is how the virus will change. Most mutations in other viruses don't have any meaningful impact on the way the virus behaves, and some mutations can even be detrimental to the virus. In other instances, viruses can mutate to spread more easily or evade the body's immune response.

"The problem is that one small little change can make a virus very harmful,” says Gustavo Caetano-Anollés, a computational biologist and biochemist at the University of Illinois at Urbana-Champaign who studies the evolution of viruses. “The difference between COVID and influenza is that humans have been exposed to [the flu] for so long and have been generating immunities for so long, it pushes down the toll of the disease.”

You may not think of the flu as a major concern today, but it still kills between 12,000 and 61,000 people in the U.S. each year and hospitalizes hundreds of thousands more. If the fatality and hospitalization rates for COVID-19 eventually decline to those of the flu — and that's still an if, Rock notes — it would still represent a significant burden.

"Influenza kills thousands of people every year, mostly older adults, and causes a huge strain on health systems,” she says. “And we could have twice as much COVID-19 as flu every year.”

Why future COVID may peak in winter

Another question is whether COVID-19 will become a seasonal illness. Many people predicted that the pandemic would ebb during the summer of 2020, but instead the U.S. experienced a surge in cases across the South and West. However, Caetano-Anollés says that the data has been muddied by the intensity of the pandemic.

"When you have a raging pandemic of this level, seasonality doesn't help,” he says. In a study published in January, Caetano-Anollés found that COVID-19 cases and mortality rates are significantly linked to temperature and latitude across 221 countries. This suggests that once the case numbers start to fall, COVID-19 may become a seasonal illness like the flu that peaks in the fall and winter.

Many viruses wax and wane with the seasons for two reasons, according to Caetano-Anollés. One is that the outer membrane protecting a virus can be vulnerable to certain environmental conditions, such as heat and ultraviolet light. Our immune system also changes with the seasons, becoming stronger in the summertime, perhaps due to increased vitamin D production.

However, seasonality doesn't mean that a virus goes away during the rest of the year. “The reason we have flu episodes every year is because there is always a low level of infections even outside of flu season,” Caetano-Anollés says, “and it's enough to maintain the virus in between peaks."

In the long term, Wherry sees two versions of what he calls a “good outcome” for COVID-19. One is that SARS-CoV-2 eventually fades away because of widespread immunity, perhaps becoming replaced by other coronavirus strains, similar to what happened with the Spanish flu. Another is that it could stick around and become an endemic seasonal virus that infects mostly young kids who haven't yet developed antibodies, but rarely causes serious illness, similar to other coronaviruses that circulate in humans and cause common colds.

In fact, scientists at Emory University and Penn State University recently developed a model that draws on studies of other human coronaviruses and predicts that SARS-CoV-2 may one day become a mild childhood illness with a fatality rate below that of the seasonal flu.

The bad outcome, according to Wherry? “If we don't vaccinate enough people and it mutates to remain pathogenic, killing thousands and thousands every year.” The best way to avoid that nightmare scenario, experts say, is to distribute the vaccine as quickly as possible, all around the world.

Quiz: How Much Do You Really Know About COVID-19 Vaccines?

Test your knowledge of how vaccinations work against the coronavirus