The Future of Telehealth and What It Means for Older Adults

Is the pandemic-related surge in virtual medicine a good thing? And is it here to stay? 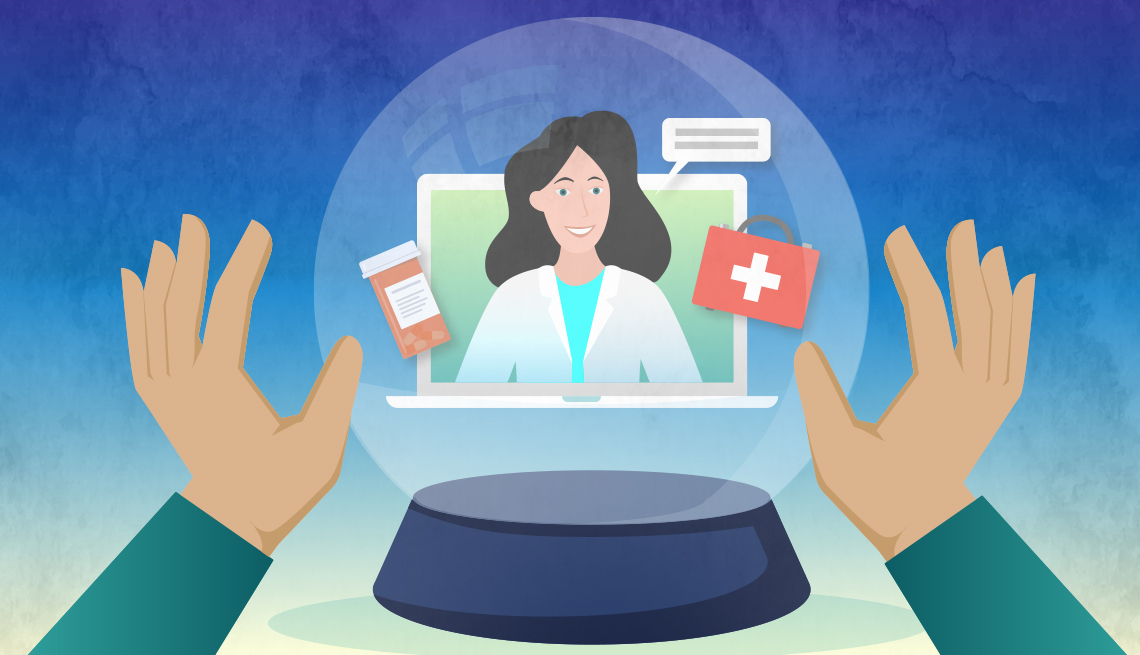 COVID-19 has ushered in the era of telemedicine, and even normally tech-shy older Americans have embraced the change in record numbers. That, at least, was the takeaway from a poll conducted in July that was sponsored by the health-insurance industry. It found that virtual doctor visits skyrocketed by 300 percent among Medicare-eligible seniors since the start of the pandemic and that nearly half of those surveyed were comfortable using telemedicine in the future — signaling that an effort to avoid in-person medical appointments while the coronavirus rages might prove a practice that continues, pandemic or not.

Government data similarly show that in just one week in April, nearly 1.7 million Medicare beneficiaries received telehealth services, compared with 13,000 in a typical week before the pandemic, and that more than 9 million Medicare enrollees received telehealth services during the four-month lockdown starting in mid-March (when the government started allowing coverage of virtual visits due to the pandemic).

As health care facilities reopen, that volume is leveling off, but experts say we're settling into having a sizable 20 to 30 percent of care delivered digitally from now on. “The past six months have proven that we can bring the doctor's office into your living room,” says Joseph Kvedar, M.D., a professor at Harvard Medical School and president of the American Telemedicine Association.

There's no doubt that the pandemic made this possible. Emergency rules removed some of the barriers that impeded the widespread adoption of home-based diagnostics and telemedicine in the past. Physicians can now practice across state lines; be reimbursed for in-home, telemedicine and audio (phone) visits; and use FaceTime, Skype or Zoom to communicate with their patients, which had long been considered taboo because of privacy issues.

As to whether these changes will endure, the head of the Centers for Medicare and Medicaid Services (CMS), Seema Verma, provided some insight with a recent statement: “With these transformative changes unleashed over the last several months, it's hard to imagine merely reverting to the way things were before.” As for what that means for those over 65, questions endure.

Pros include caring for chronic conditions

For anyone, there are pros and cons to telehealth. As Kenneth Lam, a clinical fellow in geriatrics at the University of California, San Francisco, notes, “During a video visit you can't hear patients’ lungs, feel or examine their abdomen or see how they walk into the room.” But for those over 65, there are real benefits.

For people with mobility issues, telehealth appointments can save at least one trip or treatment step, especially in the area that Kvedar calls virtual urgent care, for the relatively minor aches and pains that normally prompt us to see our family physician. If you have an earache, a sore throat, urinary-tract-infection symptoms or are infected with COVID-19 but not sick enough to be hospitalized, a video visit with your primary care doc may suffice. (And from home, you might actually have all the pills you're taking right in front of you when your physician asks about them.)

Telehealth also seems to work well in the management of chronic diseases, like high blood pressure, diabetes, heart failure and a variety of other ailments that require regular management and follow-up care, providing convenience to those burdened by the need for appointment after appointment. What's more, evidence shows “the quality of care is the same,” Kvedar says.

Evidence even suggests that shifting more hospital recoveries to the home, with the help of telemedicine, is beneficial to those with chronic conditions such as heart failure, COPD or emphysema.

A 2019 pilot study conducted at Brigham and Women's Hospital in Boston, for instance, suggested that patients heal better at home, which echoed the experience of other academic institutions, including Johns Hopkins and Mayo Clinic, studying the hospital-at-home model. Patients discharged earlier and treated at home with methods like remote vital-sign monitoring via a skin patch and, when necessary, in-home services from a home health aide, physical therapist or social worker fared much better than those who remained in the hospital. What's more, they were more active and were readmitted less often. Their care was cheaper, too, resulting in out-of-pocket savings, as compared with that of a hospital control group.

Product innovations in at-home diagnostics that are used to deliver a wider range of health care digitally could also benefit older Americans in the future, expanding current options like wearable or implanatable devices, such as glucose sensors that monitor blood sugar levels for diabetics. Routine diagnostic tests for an array of ailments, ranging from urinary tract infections to cholesterol screening, will soon be possible at home, experts say.

Where telemedicine may fail older adults

Of course, telehealth represents challenges for older Americans, and there are times when a face-to-face visit is vital. Getting to know your physician at an initial meeting is likely better accomplished in person. So, too, is receiving any serious health news, says Edward Lee, M.D., chief information officer at the Permanente Federation, the coalition of medical groups that are part of Kaiser Permanente. “Certainly if a physician needs to have a difficult conversation, such as a diagnosis of cancer or an end-of-life conversation, it's hard to substitute the need to hold a patient's hand when the situation arises, and an in-person visit is more appropriate."

"Certainly if a physician needs to have a difficult conversation, such as a diagnosis of cancer or an end-of-life conversation, it's hard to substitute the need to hold a patient's hand when the situation arises, and an in-person visit is more appropriate."

Plus, phone or video appointments can prove difficult for those with dementia or someone who has difficulty hearing or communicating, according to Lam's own recent JAMA study. In that study he found that more than a third of adults over 65 (or about 13 million older adults) were not ready for telemedicine in the form of video visits; this number rose to 72 percent for those over age 85 because of inexperience with the technology or physical disability, such as difficulty hearing, communicating, poor eyesight or dementia.

Lam also points out that the benefits telehealth can provide in managing chronic conditions might be fewer for older adults, who are often sicker. “Certainly with multiple chronic conditions and multiple disabilities, I feel I can diagnose their conditions better in person,” he says. “And because of the social isolation many seniors experience, providing the dignity of in-person visits is very important."

And other obstacles remain. More than 26 percent of Medicare beneficiaries lack digital access at home, according to an August 2020 study by University of Pittsburgh researchers published in JAMA. This made it difficult for them to have video visits with medical professionals. Perhaps not surprising, the proportion of Medicare enrollees who lacked a high-speed internet connection or a smartphone with a wireless data plan — which are necessary for digital access — was substantially higher among those who were 85 or older, widowed, of lower socioeconomic status or in communities of color. Seniors without digital access would have to rely on audio-only visits (by phone), which these researchers noted might not be adequate in situations where visual monitoring or diagnosis is critical.

"Telehealth does increase access to care for patients who otherwise wouldn't get it or who are fearful to go out of their homes or can't take time off work,” says Lee of the Permanente Federation. “But at the same time, we can't ignore the fact that not everyone knows how to use the technology or has a smartphone. We don't want to widen health care disparities.”

Part of the solution is making broadband a public utility in much the same way electricity became widely available in the early part of the past century to increase access for everyone. “Universal broadband is one of the ingredients, but seniors also need support, like a digital concierge,” says Andrew Gettinger, M.D., chief clinical officer in the Office of the National Coordinator for Health Information Technology at the U.S. Department of Health and Human Services. “But these are all steps in the direction of a new ecosystem which is potentially far more powerful than going to see a doctor once or twice a year. Home health is very rich and provides a whole new way of caring for folks."

How to Connect With Your Doctor Virtually

Tips for using a smartphone, tablet or computer for telehealth appointments

AARP Answers: Telehealth and the Coronavirus

How to connect with a doctor and get care from home