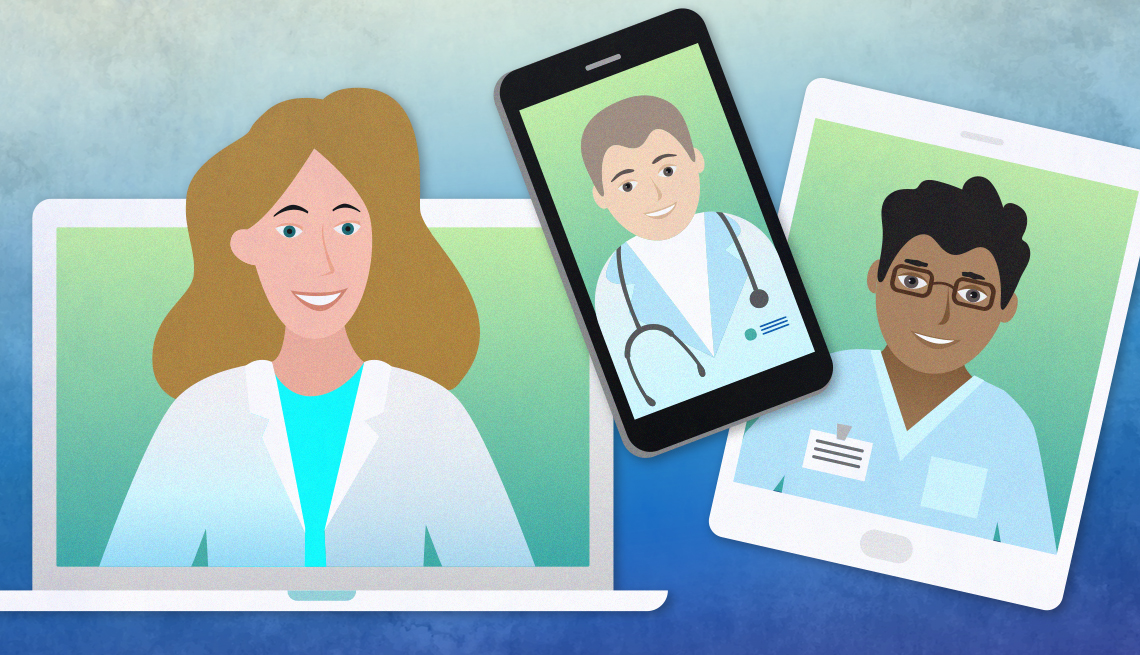 En español | If scheduling a virtual doctor's appointment sounds great — except for figuring out the technology involved — know that a few key tips can make the process a lot less daunting. First, you'll need to decide if you want to do so with a mobile phone, tablet or computer. Each option has its own advantages and disadvantages, and with any, you'll want to do a trial run a few days before your appointment. Here's the basic 411 on each.

Pros: It's a mobile device, so you can easily show your doctor a rash, for instance — or take a picture of it and easily send it to your doctor prior to your appointment. In addition, you can “see” your doctor when you're away from home. Since video and audio components are built in, a mobile phone is pretty simple to use. “You don't have to worry about the microphone settings because the audio is always on,” explains Matthew Faiman, M.D., medical director of Express Care Online at the Cleveland Clinic.

You can also search for the MyChart app or other apps you need in the App Store (for Apple devices) or Google Play store (for Android devices). If you have an iPhone, you'll click the Get button to download the app. Depending on your phone's settings, you may need to log in with your Apple ID to start the download. Afterward, you'll click the Install button. If you have an Android device, you'll click on Install, then on the Open button. The first time you use a MyChart app, you'll be prompted to select your hospital and create an account. Once you have an account, you can use the app to launch a video visit, schedule an appointment and view your medical information. 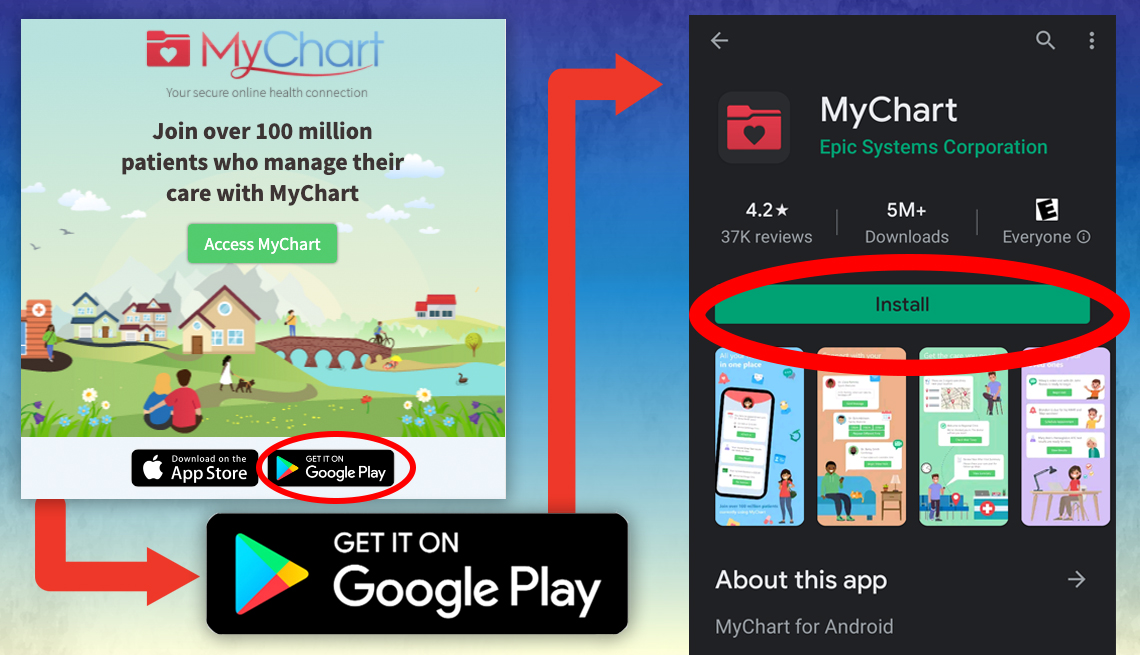 Other disadvantages: The smartphone screen is small, so it may be difficult to see your doctor's face, and your doctor may not be able to share medical images with you. Also, some people have trouble hearing their doctors on a smartphone. That can be even more difficult if you receive a phone call during your visit. (If you have an iPhone, you'll need to go to Settings and turn on Do Not Disturb.) Some people walk around with their phone, but “it helps if you're seated and the screen isn't moving” during appointments, says Susan Bailey, M.D., an allergist and immunologist and president of the American Medical Association. Finally, a smartphone isn't hands-free; you may need to prop it up during the appointment. Fortunately, there are kickstands for smartphones.

How to make it work: You'll need a 3G (third generation) smartphone or a more recent model, Faiman says. Consider using your home Wi-Fi instead of cellular data because the connection will be more reliable and less expensive. The internet speed should be at least 5 megabits per second (Mbps). Ask family members to minimize their use of devices during your appointment.

To use an app, your smartphone must meet certain system requirements. For instance, the MyChart app requires iOS 11.0 or later for Apple devices (and 3.0 or later for the Apple watch). Many hospital apps require 5.0 and higher for Android devices.

Pros: Like a smartphone, a tablet is mobile, and the video and audio components are built in. The screen and keyboard are larger, though, and you can increase the size of the type. “The iPad was built for telemedicine,” says Paul Testa, M.D., chief medical information officer and assistant professor in the Department of Emergency Medicine at New York University (NYU) Langone Health.

Cons: Apps may be challenging to download the first time you try. In addition, it can be difficult to figure out where the camera is on a tablet — and where to look during a visit. If you're holding a tablet horizontally, the camera is on the left. It's best to use the device in portrait mode (vertically) so you're looking straight at the camera, Faiman says.

How to make it work: Using your home Wi-Fi is best, Faiman adds. While it's possible to use cellular service, it may be more expensive. Also, before you download an app, be sure your iPad meets the app's system requirements.

3. Using a desktop computer or laptop

Pros: For some, the familiarity with a desktop computer or laptop outweighs the advantages of using a mobile device for a virtual visit. The screen is large, which affords good views of your doctor and allows him or her to share medical images with you, such as X-rays or ultrasounds. The camera is in the middle of the monitor, so it's easy to know where to look. In addition, the audio may be better quality than that of a smartphone.

Cons: You can't move a desktop computer to a location with more privacy — and you can't use it when you're away from home. In addition, if your computer monitor doesn't have a built-in web camera, microphone and speakers, you'll need to purchase them. Also, starting a virtual visit involves multiple steps. First, you'll click on a link in an email from your provider or your hospital system's patient portal. Then you'll install the video software your hospital or doctor uses and click on Allow Access for both the audio and video to work.

How to make it work: For the most reliable connection, your computer should be hardwired to the internet, meaning that it's connected to your home router via an Ethernet cable. With a wired connection, data is transmitted over cable instead of wireless signals. Wi-Fi is the next best option. Check to see if your computer's operating system meets the requirements of the telemedicine platform you're using. If it doesn't, you'll need to update the software. Be sure you're using the latest version of the Safari or Google Chrome web browsers. Go to Settings or System Preferences, and click on Update.

All About the Apps

While your phone has the equivalent of built-in video chat (such as FaceTime on an iPhone), using your tablet or laptop will likely require you to download a similar feature, along with an app like MyChart that lets you and your doctor launch a virtual visit and record medical details from it.

What you'll download depends on the software your doctor or health system uses. Some doctors connect with patients through Doxy.me and a smartphone. With Doxy.me, you'll receive a text message and be asked to click on a link, and then you'll be face-to-face with your doctor. If your health system uses MyChart and Zoom, you might be instructed to open the Zoom app, tap on Join a Meeting, and enter your provider's meeting ID, which is found in your MyChart account.

Alternatively, you might need to tap your health system's app or the MyChart app on your smartphone or tablet and log in with your ID and password. Next, you'll tap on Appointments, then the video visit appointment button. Then you'll click on Begin Visit. Zoom will launch, and you'll click on Open This Page in Zoom. Finally, you'll click on Join With Video and then on Call Using Internet Audio to begin the appointment. When the visit is over, you'll be prompted to Leave the Meeting and to tap OK.

Connecting with your computer

There are several different ways to connect, but if your health system launches video visits in MyChart, it might work like this: On the day of the appointment, you'll receive an email with a link to your video appointment. About 15 minutes prior to your appointment, you'll log into your MyChart account, go to the Appointments menu and click on Upcoming and Past Appointments, select Video Visit and click on Begin Video Visit. When your provider joins, you'll click on Join With Video. You'll also be prompted to join with audio, enabling you to hear each other. Be sure the video and audio icons aren't crossed out on the screen. If they are, click on them (the line crossing them out will disappear) so that you can see and hear your doctor.