Chronic lung diseases are on the rise. What to do to minimize your risk

For years I've been going on long morning walks with my super smart and stylish friend Susan. But lately whenever we climb a hill, her breath becomes labored and we need to slow down; sometimes we stop in our tracks until she regains her energy. “This is what I get for smoking two packs a day,” she laments.

Susan quit cigarettes more than 30 years ago. But because of her former habit, at 67 she's now dealing with chronic obstructive pulmonary disease (COPD), an escalating lung illness that over time makes it harder and harder to breathe.

Chronic respiratory diseases are the third leading cause of death in people 65 and older. They take more lives than stroke, diabetes or even Alzheimer's. And COPD significantly increases one's vulnerability to the new coronavirus. COVID-19 affects the part of the lungs where oxygen and carbon dioxide are exchanged. Older Americans in general need to pay close attention to the evolving advice on the coronavirus from the Centers for Disease Control and Prevention (CDC); if you're a former smoker, or have symptoms of COPD, take these warnings extra seriously. 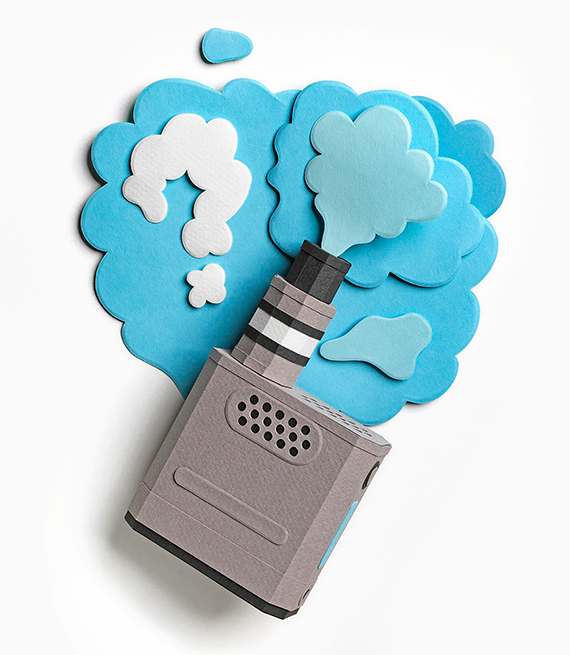 If you smoke, you might think of vaping as an alternative. “Vaping, when compared to smoking cigarettes, is probably safer,” Seides says. “But vaping is not as safe as inhaling nothing but clean air."

What exactly is COPD?

Emphysema, a condition in which the air sacs (alveoli) of your lungs are damaged and eventually destroyed, causing breathlessness.

Chronic bronchitis, in which your bronchial tubes become inflamed and produce lots of mucus, leading to coughing and difficulty breathing.

Symptoms often don't appear until the disease progresses, but they can include:

If you have asthma, you may experience similar symptoms, including wheezing, coughing and shortness of breath. But with asthma, the damage to your lungs can be reversed. Not so with COPD.

How did this happen to me?

When you start smoking, you accelerate your lungs’ aging process by a significant factor. “Once you quit smoking, your lungs return to their normal aging rate,” Seides says. “But you can't go backward. The damage done during your smoking phase can't be undone.” It's no coincidence then that 75 percent of folks diagnosed with COPD either smoke or used to smoke—not only cigarettes, but also cigars and pipes. There are other risk factors as well:

Secondhand smoke
The damage to your lungs of frequently being around other smokers can approach that of actually being a smoker.

Dusts
Regular exposure in the workplace, including flour in bakeries, wood dust and grains on farms can be damaging.

Vehicle and industrial exhaust
Researchers at Carnegie Mellon University in Pittsburgh recently reported that air pollution is on the rise. In 2017 and 2018 combined, worsening air quality was linked to nearly 10,000 additional lung disease deaths.

Yikes! How can I protect myself?

If you suspect your breathing may be compromised, start by cutting down on your exposure to environmental irritants:

What should I do if I have trouble breathing?

Talk to your primary care physician first. She may refer you to a lung specialist—called a pulmonologist—who will probably give you a simple test called spirometry to find out how well your lungs are working. Your doctor might also order a chest X-ray and an arterial blood gas test, which will show how well your lungs are moving oxygen into (and carbon dioxide out of) your bloodstream.

What treatments are available?

"There are several ways we can offer relief to patients who are dealing with COPD,” says Javier Barreda Garcia, M.D., assistant professor of pulmonary and critical care at McGovern Medical School at UTHealth in Houston. Various inhalers are available that relax bronchial muscles and decrease inflammation of the bronchial tubes. If you've received a diagnosis of COPD, your doctor will probably also recommend pulmonary rehabilitation, a medically prescribed exercise program to help build up your strength and endurance. Depending on your physical abilities, it will include instruction on breathing techniques (including diaphragmatic and pursed lipped breathing), walking on a treadmill and doing simple exercises, either while standing or sitting in a chair. Only in worst-case scenarios—when your body just isn't getting enough oxygen to function properly—will a doctor set you up with some form of portable oxygen therapy.

In severe cases, a doctor may perform a bronchoscopy. This procedure involves sliding a thin tube and small camera through your nose or mouth and into your lungs and inserting endobronchial valves (EBV), a technique that was recently approved by the FDA. “This procedure makes it possible for the lung to empty itself of air,” Garcia adds.

How else can I protect my lungs?

In addition to not smoking, avoiding air pollutants and getting more exercise, the American Lung Association urges you to:

Here's what to leave behind as a new decade begins