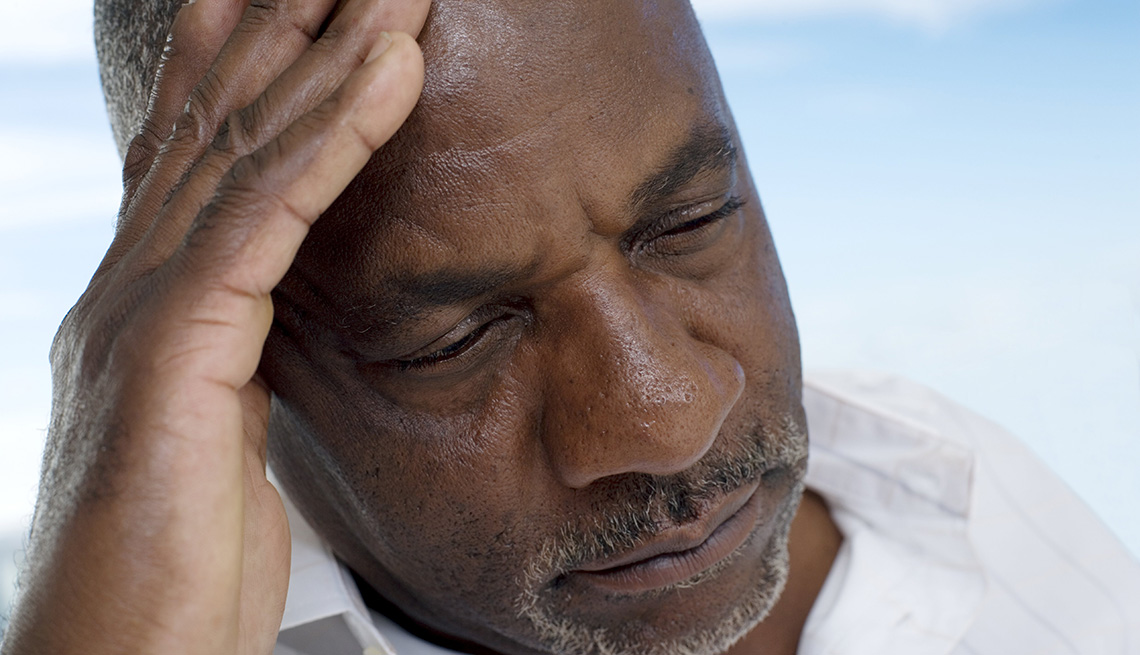 We've all had moments in our lives when we feel sad or down in the dumps. But if weeks go by and those feelings linger, it may be depression. More than mere sadness, depression can suck the joy out of life and leave you feeling overwhelmed — in some cases, unable to function.

The good news: Depression is very treatable. Before taking action, here are some things to know about this common condition.

Sadness is a symptom we're all familiar with, but depression symptoms aren't limited to the mind. “In older people, depression tends to manifest itself more often with physical symptomology than in younger people. ‘I hurt more. I just don't feel right physically,'” says Bruce Sutor, M.D., a psychiatrist at the Mayo Clinic, in Rochester, Minnesota. Common symptoms: headaches, joint pain, fatigue, sleep disturbances, loss of appetite and gastrointestinal issues.

And if left untreated — which happens all too often when doctors are trying to get to the bottom of aches and pains and not asking about possible emotional issues — it can have dire consequences. The combination of mental and physical pain can be debilitating. In fact, clinical depression is the leading cause of disability worldwide, according to the World Health Organization. Says Sutor: “We tell our primary care colleagues, ‘If you've got people coming in with different physical complaints that you just can't get to the bottom of, start thinking depression.'”

Women are particularly prone to depression

Women are almost twice as likely to be diagnosed than men, according to the Mayo Clinic. Some suspect this is due to hormonal fluctuations, particularly during menopause. Others believe that women may be more prone to chronic stress — say, the kind that might come from taking care of an elderly parent — which can take a toll and lead to depression.

But it may also be that depression simply shows up differently in men, who often appear angry or irritable, rather than sad, says Brian P. Cole, an assistant professor of counseling psychology at the University of Kansas. He notes that this tendency can be traced back to boyhood, a time when many men are socialized to believe that it is unacceptable to show vulnerability. “It is important that we normalize the fact that men get depressed and that it is acceptable to seek help from family, friends and professionals,” says Cole.

Symptoms of depression can look different when we're older

Some of us are genetically predisposed to developing depression. (If you have depression, your first-degree relatives — parents, full siblings, offspring — have a two-to-three times greater chance of having it as well.) But long-term stressful life situations and the challenges of aging — such as chronic illness or increasing disability, isolation, the death of a spouse or struggling to adapt to retirement — can also increase someone's risk of developing depression.

Unfortunately, the disorder often goes untreated in older adults, in part because their depression can be challenging to diagnose. Their symptoms are often different than those of younger adults, says Ipsit Vahia, M.D., medical director, geriatric psychiatry outpatient programs, at McLean Hospital in Belmont, Massachusetts, and assistant professor of psychiatry at Harvard Medical School. Rather than the “classic” symptoms of sadness, fearfulness or hopelessness, they tend to display symptoms such as irritability, a lack of motivation or energy, or a disruption in sleep patterns or appetite. “There's also a tendency to start withdrawing,” says John F. Greden, M.D., founder and executive director of the University of Michigan Comprehensive Depression Center. “That's what families notice first.” Many older adults — and even many clinicians — don't recognize these symptoms as depression, especially because they often overlap with symptoms of other health conditions. Depression and dementia are especially easy to confuse, says Vahia.

Depression can affect your heart

"It's been fairly clear for the last 20 or so years that there is a link between depression and heart disease, and the evidence continues to accumulate,” says Robert Carney, professor of psychiatry at the Washington University School of Medicine in St. Louis, Missouri. Indeed, research appearing on the National Institutes of Health (NIH) website states that adults with a depressive disorder or symptoms have a 64 percent greater risk of developing coronary artery disease, compared to those without depression. “Depression doesn't hold the same risk as, say, high cholesterol,” says Carney, “but it's close.”

There are a number of possible explanations. Among them: People who are depressed and those who develop heart disease seem to share certain inflammatory markers. Also, says Carney, “Depressed people tend to have less heart rate variability. Their heart is not as responsive to changes in activity levels, and they tend to have higher heart rates overall, than people who are not depressed. These are factors that can lead to a cardiac event.” Finally, there are the behavioral aspects of the disorder. Depressed people are more likely to be more sedentary, more likely to be smokers, and less likely to follow the recommended dietary guidelines — all things that can lead to ticker trouble down the road.

But according to a 2014 study from Indiana University, early treatment for depression — before the onset of cardiovascular disease — may slice the risk of heart attacks (and stroke) by almost half.

Antidepressants combined with therapy seems to be the most effective treatment

Antidepressant use among all ages jumped an eye-opening 400 percent between 1988 and 2008, according to the National Center for Health Statistics. “But medication isn't always warranted,” says Sutor. “With mild to moderate depression, there's good evidence that people can respond to certain types of psychotherapy, such as cognitive behavior therapy.” (CBT, as it's known, teaches new ways of thinking and behaving, and offers help in changing habits that may be contributing to depression.)

"For managing major depressive disorder, antidepressants in combination with psychotherapy seem to work more effectively than either form of treatment by itself,” says Vahia. In a 2020 review of several studies on antidepressant success rates, the NIH reported that when patients are treated without antidepressants, about 20 to 40 out of 100 people who took a placebo saw their symptoms improve within six to eight weeks. For those treated with antidepressants, about 40 to 60 out of 100 people noticed an improvement in the same time period. Prescribing antidepressants isn't a precise science. Similar to treating high blood pressure, it takes time to figure out the right medication. “About 35 percent of people will respond to the first antidepressant they're put on,” says Maria A. Oquendo, M.D., chair of psychiatry at University of Pennsylvania's Perelman School of Medicine and president of the American Foundation for Suicide Prevention. “By the third trial, about 65 percent will respond."

Particular care needs to be taken when prescribing antidepressants to older patients. “Age-related changes can change the way medicines are metabolized,” says Jon Stevens, M.D., chief of outpatient services at the Menninger Clinic, in Houston, Texas. “Then there's just the fact that older folks tend to be taking medication for other health problems, so there's a higher chance of drug-drug interaction.”

"Managing depression is about more than just ‘Take this pill,'” says Sutor. “It's also engaging in healthy behaviors that can help to move the depression along.” Probably the simplest, most effective treatment is exercise. “I have never seen anyone get better from depression sitting on their couch,” says Stevens, who notes that there is a proven body-mind connection. A 2016 study in the Journal of Psychiatric Research found that regular moderate-intensity aerobic exercise had “a large and significant antidepressant effect in people with depression,” including major depressive disorder. What's more, it appears that even modest levels — say, taking a brisk walk around the neighborhood — may have benefits.

Other lifestyle tweaks can supply a lift. There's evidence that eating healthy (yes, a Mediterranean diet, chock-full of fruits, vegetables and whole grains) can help reduce symptoms of depression. A study out of Boston University School of Medicine has found evidence that mindfulness — focusing on the present through breathing exercises or yoga moves — can not only offer relief from symptoms during each session but cumulatively, over time, as well.

And let's not forget the power of social interaction. A study in The American Journal of Psychiatry focused on 106 modifiable factors that might affect people's risk of depression and found that “far and away the most prominent of these factors was the frequency of confiding in others.”

(More) help may be on the way

Would you believe ... Botox? The drug, commonly injected to erase wrinkles, ease migraines and stop excessive sweating, is currently being tested in clinical trials for its ability to treat depression. In the study, published 2020 in Scientific Reports, researchers combed through almost 40,000 reports from the FDA's Adverse Effect Reporting System, containing reports of people who had experienced adverse events while taking a medication. What they discovered: People who got Botox injections — in the forehead, neck and limbs — reported depression significantly less often than patients undergoing different treatments for the same conditions. One hypothesis: Botox may travel to parts of the central nervous systems involved in mood and emotions.

Why Many Caregivers and Care Recipients Are Feeling the Holiday Blues