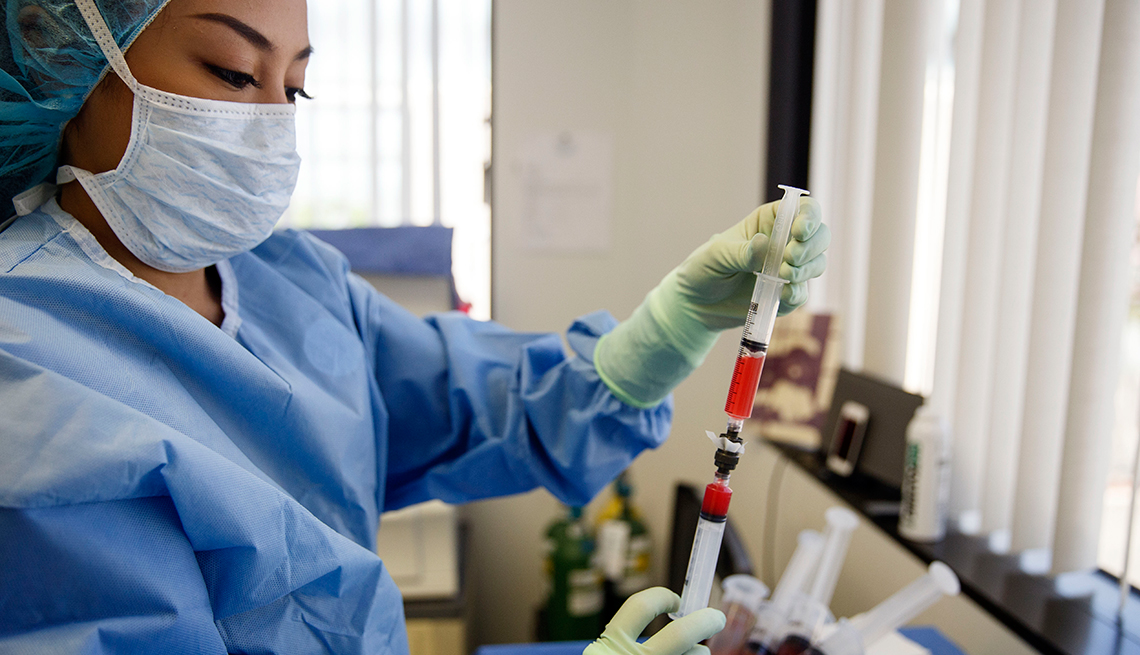 Sitting on the fringes of the mainstream health industry, nearly 600 clinics offering stem cell treatments have sprouted up in the United States. They promise relief from an array of ailments, from spinal cord injury, stroke and Parkinson’s disease to ALS and Alzheimer’s. Stem cell clinics tend to market directly to consumers; their procedures typically are not covered by insurance, and they use a regulatory loophole to perform injection therapies for uses that are not yet approved by the Food and Drug Administration.

The clinics and many satisfied patients herald stem cell treatments as the next great advance in medicine. But critics contend that the current marketplace is based on unproven science. And safety violations at some clinics, which have led to such tragic outcomes as blindness, unusual bone growths and two deaths, have the FDA pondering whether it needs to intervene.

“People have benefited, but the placebo effect can be powerful, especially when you’ve forked over big bucks for the procedure,” says Leigh Turner, a bioethicist at the University of Minnesota and coauthor of a study on the number of domestic stem cell outfits. “And these clinics don’t disclose when patients don’t see any improvement or had serious complications.”

Researchers at academic institutions continue to study the benefits of stem cells, and many see the potential for medical breakthroughs. So far, though, the FDA has approved stem cells only for these treatments: cancer, blood and immune disorders, and skin grafts for burns. But stem cell therapies costing $5,000 to $20,000 per treatment are offered for all sorts of ailments, including those outside the FDA’s approved list, because the clinics operate in a gray area of the law. As long as the patient’s own stem cells are used, and these cells are only subjected to “minimal manipulation,” they’re exempt from federal oversight. That’s because their usage is considered a medical procedure, not a drug.

Stem cells are also trendy in cosmetic procedures. For this form of a face-lift, stem cells are injected along with fat to plump up the skin. There’s scant evidence that the procedure works better than standard face-lifts.

What are stem cells?

Stem cells are naturally occurring cells in the body that can develop into nearly any other type of cell. Studies suggest that they work their magic by secreting growth factors (hormonal steroids or proteins) that nurse ailing cells, preventing them from dying. Stem cells also stimulate the formation of blood vessels that nourish damaged tissue with nutrients and oxygen. Stem cells may even form new cells, which could potentially augment the body’s natural repair mechanisms by replacing damaged or dead cells throughout the body.

Twenty years ago, stem cells were touted as the next frontier in medicine. The hope was that we could stick them into an ailing brain or arthritic knee and these grafts would restore lost function as new cells would grow to replace the damaged ones.

The past couple of years have brought notable successes in controlled human experiments, using stem cells developed in labs for more complex disorders such as multiple sclerosis, spinal cord injury, stroke and some forms of blindness. But this research has proceeded rather slowly, meaning it could be a decade or more before such procedures become a standard part of our therapeutic arsenal. 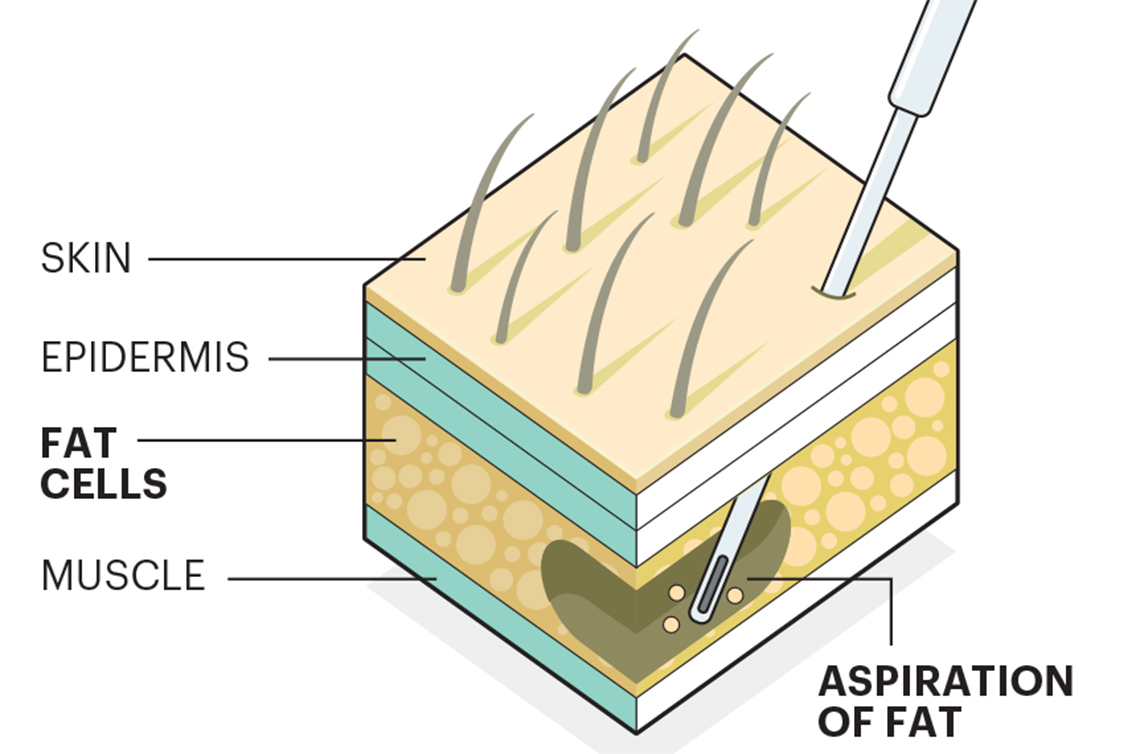 Fat harvesting: While the patient is under local anesthesia, doctors perform a mini-liposuction and remove fat tissue from the waist, hip or side of the body. 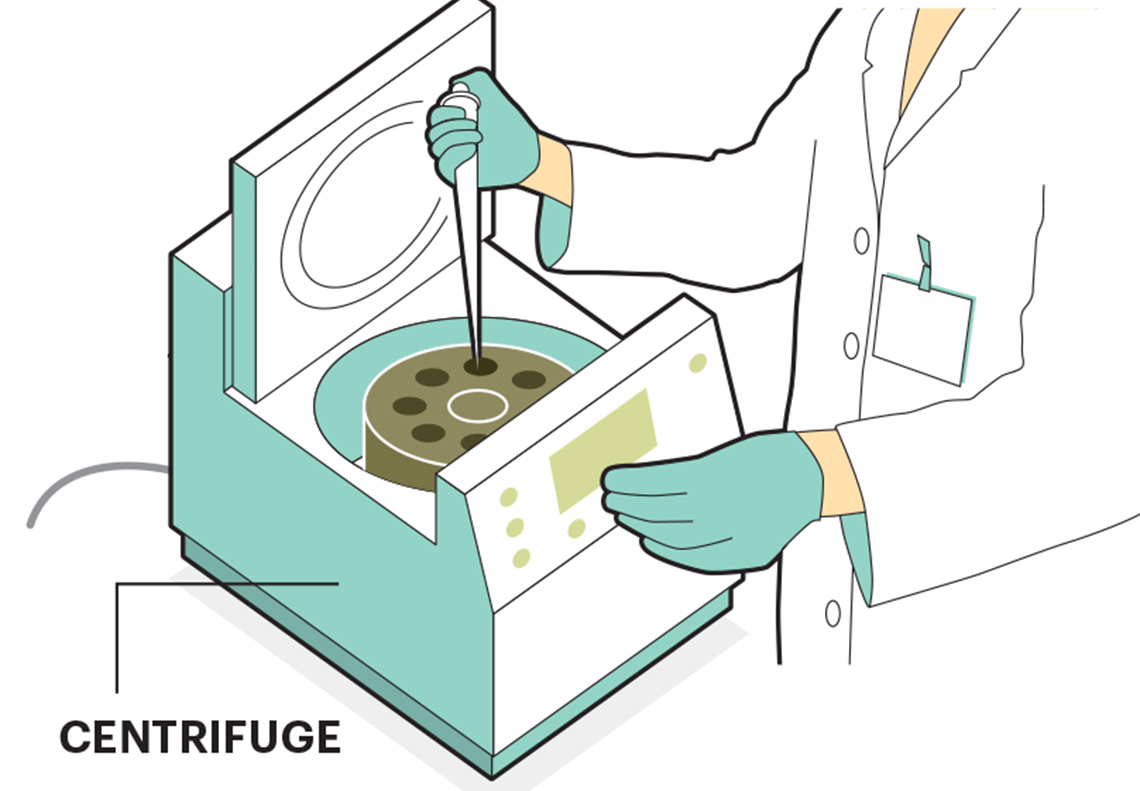 Cell preparation: The fat is spun in a centrifuge to separate stem cells from the tissue. 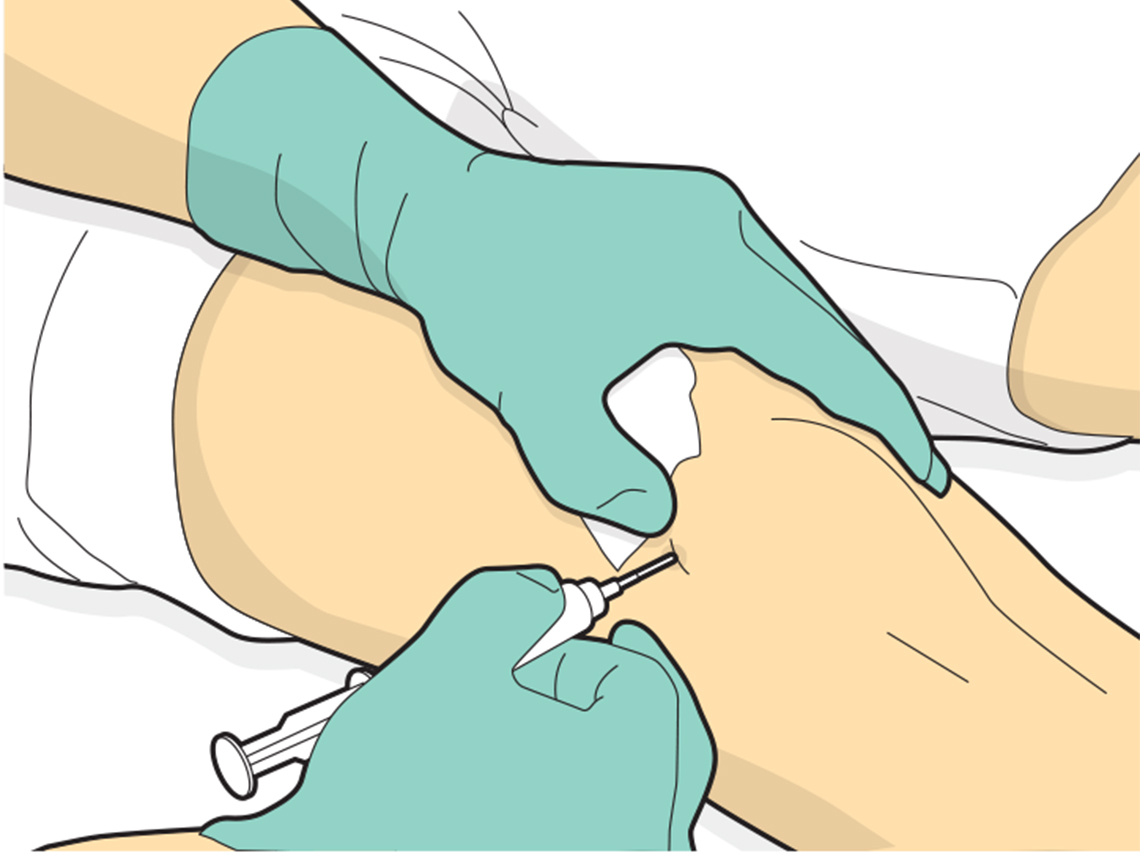 Stem cell treatment: The stem cells are returned to the patient’s body through an intravenous infusion or an injection directly into the joints, tendons or ligaments.

Hope has fueled the mushrooming growth of private stem cell clinics. The industry has been aided by stories like those of Laurie Hanna.

A skiing accident in the mid-1990s had shredded the cartilage in Hanna’s knee. Surgery helped the damaged joint, but it still deteriorated over the years, drastically limiting her mobility. “When I walked, my knee sounded like crunchy granola,” says the 52-year-old nurse anesthetist, who lives in Los Angeles with her son.

When one of the plastic surgeons Hanna worked for, Mark Berman, talked about doing stem cell therapy, she jumped at the chance. “What did I have to lose?” Hanna says. “My only other option was knee replacement surgery.”

One morning in January 2010, Hanna arrived at Berman’s expansive Beverly Hills office, with comfy leather couches in the waiting room and a state-of-the-art surgical suite. Berman, working in tandem with an orthopedic surgeon, removed fat tissue from her hip, separated out the stem cells and injected those cells into her left knee. After two treatments, Hanna noticed a “significant” improvement and was able to ski again for the first time in 10 years. “I called him on the phone, crying,” Hanna recalls. “I had back my quality of life.”

“This is the front edge of a new era of medicine,” says Berman, who has expanded the use of stem cell procedures within his broader plastic surgery practice in California and has helped establish a nationwide network of clinics called the Cell Surgical Network. Berman has even performed stem cell treatments on himself and his wife. He says he finds the procedures work best for orthopedic conditions, such as arthritis and hip, back and joint pain. “We’re using the body’s natural repair mechanisms to reverse cell damage.”

While there haven’t been many reports about serious complications at clinics in the U.S., the lack of oversight does allow abuses. Two patients in Florida died after receiving stem cell injections, and a California woman developed bone fragments in her eyelids after a stem cell face-lift.

In another incident, three older women, paying to participate in what was described as a clinical trial, were blinded after being injected with stem cells at a South Florida clinic to treat their macular degeneration. All three patients had functional vision — they could watch TV and get around unassisted, but they worried about the prospect of further deterioration and the potential loss of their driver’s licenses. Lured by claims on the clinic website, they each paid $5,000 for injections in both eyes. The turnaround time was about 30 minutes from harvesting the tissue to the injection of stem cells into the vitreous cavity of both eyes, which was done by a nurse without the direct supervision of a doctor.

Within a few days, it was obvious something was wrong — they ended up in the ER in severe pain and complained of vision loss. Two of them were referred to Thomas Albini, an ophthalmologist at the University of Miami. He speculates that when the stem cells started dividing, they caused the retina to detach. “There was nothing we could do to bring their vision back,” Albini says. All three are now legally blind and unable to live independently.

The FDA is struggling with how to police these clinics. The agency held hearings last September and has sent warning letters for safety violations to a handful of the worst offenders. The agency would also like to classify stem cell treatments as drugs, which would mean they would have to go through years of human tests before they could be used commercially.

Beyond isolated horror stories, there are concerns about the treatments performed by certain clinics. “They’re basically fraudulent,” says Larry Goldstein, M.D., director of the Stem Cell program at the University of California, San Diego, and scientific director of the Sanford Consortium for Regenerative Medicine. “They take advantage of the average person’s lack of sophisticated medical information and judgment and promise improvements in disease that are not reasonable.”

But the industry has grown so rapidly in the past several years that “it’s going to require a lot of firepower from government and other regulatory agencies to rein it in,” says Turner, the bioethicist at the University of Minnesota. “In the meantime, it’s a Wild West marketplace where anything goes.”

Reputable clinics exist, but it is important to do your homework before seeking treatment. 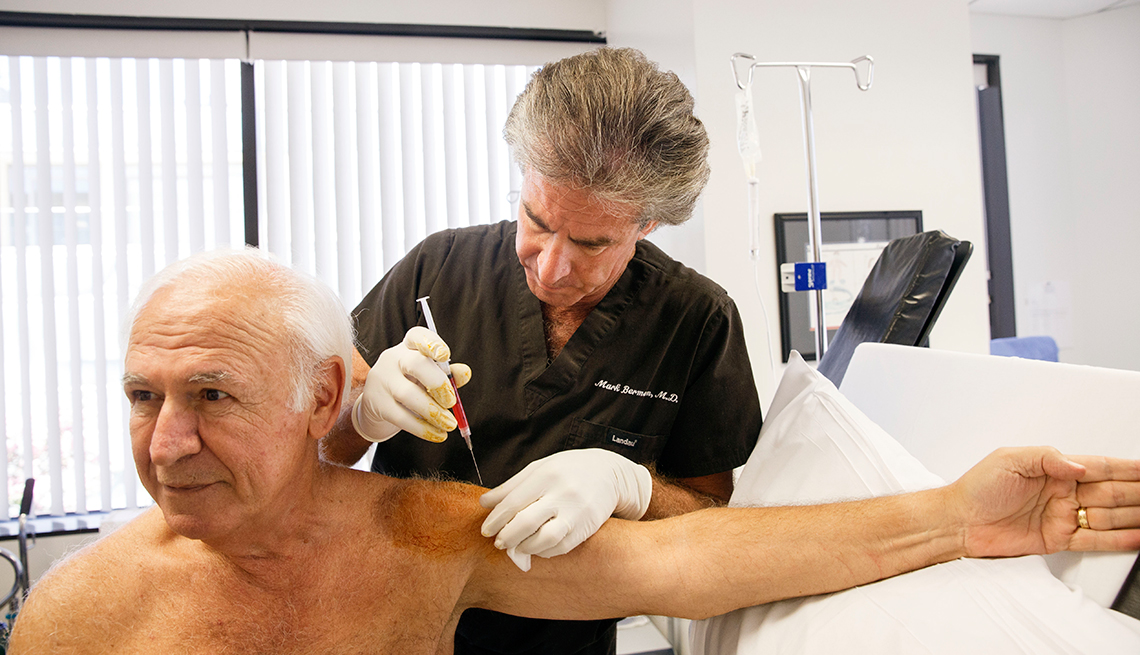 Mark Berman gives Anthony Lekkos a stem cell injection in his medical office in Beverly Hills. Berman has expanded such treatments within his cosmetic surgery practice and says they work best in treating orthopedic conditions. He has helped form the Cell Surgical Network, with members across the U.S.

Academic researchers are working on more advanced treatments using stem cells developed in labs. Use on patients has been limited to clinical trials so far. Their sources for stem cells include: