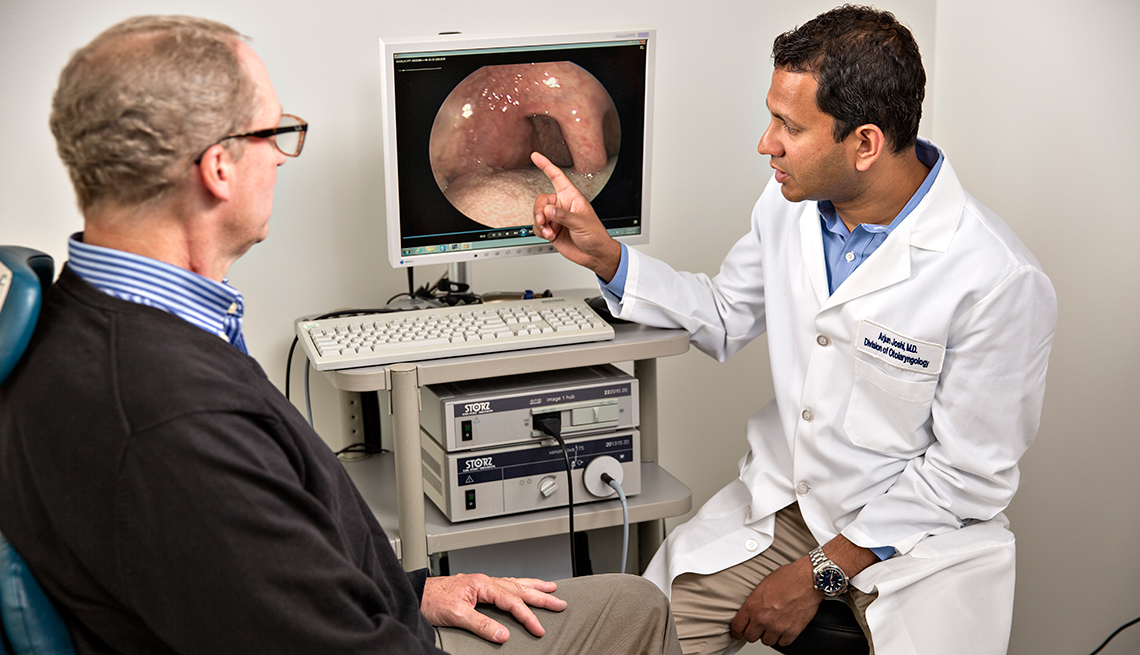 Researchers are now convinced that HPV causes most oropharyngeal cancers; the latest findings show that 3 out of 4 cases of the disease are HPV-positive.

En español | Even before the biopsy results, Scott Davis sensed something was wrong. On a camping trip with his wife in the summer of 2015, the 55-year-old AARP creative director from Washington, D.C., noticed a small lump in his neck. Back home, his primary care doctor recommended waiting a couple of weeks. "But I just didn't feel comfortable waiting," Davis says.

He was right to be worried. Arjun Joshi, a surgeon at George Washington University, performed a biopsy on his neck that showed cancer in his lymph nodes; a subsequent examination revealed that the cancer's source was one of his tonsils.

The diagnosis came as a shock. "Cancer doesn't run in my family," Davis says. "I've always thought of myself as healthy and active. I'm not a smoker."

Joshi told Davis that he was not alone, and that the majority of cases he sees are similar. Indeed, more and more men just like Davis — healthy, in their 40s to 60s — are showing up with a form of throat cancer that targets the tonsils and the back of the tongue, an area called the oropharynx. One of Davis' colleagues, in fact, is battling the same form of cancer.

Oropharyngeal carcinomas are diagnosed in more than 15,000 men and women in the U.S. each year. But public health experts warn that the number of cases in men over age 50 will rise dramatically in the coming years.

Zeroing in on an unexpected culprit

Thirty years ago, as the overall incidence of head and neck cancers began declining, experts assumed that oropharyngeal cancers were on the run. Smoking was the leading risk factor. As tobacco use declined, so would cases of the cancer. But instead, even as fewer Americans smoked, doctors began to diagnose more oropharyngeal cancers. Many patients, like Davis, were younger than the typical ones doctors had seen before. Men outnumber women 4 to 1.

Maura Gillison, an oncologist at the Ohio State University in Columbus, was one of the first researchers to suspect that the cancers were being caused by an unexpected culprit: human papillomavirus, or HPV, the same virus that causes cervical cancer in women.

"HPV had turned up in some tissue samples from oropharyngeal tumors, but we didn't know if that was just a coincidence," she says. It wasn't. When Gillison tested tumor samples from patients with oropharyngeal cancers, she found that about 25 percent contained the virus.

"At the time, most people in the field thought I was crazy," Gillison says. But new evidence kept coming. In a 2007 study, Gillison found that those with head and neck cancer were 12 times more likely to be infected with HPV in their mouths and throats than healthy individuals.

Many Americans heard the first alarm from an unlikely source — the actor Michael Douglas, who was diagnosed in 2010 with "throat cancer." In a 2013 interview in the British newspaper the Guardian, Douglas linked the cancer to oral sex, generating sensational headlines around the world. Agents for the actor have since said that he didn't necessarily mean his own cancer was caused by oral sex.

The virus's DNA can hang out in cells for decades before turning cancerous. "So the cancers that we're beginning to see now are probably from exposures that people had as teenagers or in their early 20s," says Erich M. Sturgis, a head and neck surgical oncologist at MD Anderson Cancer Center.

The reason for the rise of HPV-related oropharyngeal cancer is unknown, but may result from the greater sexual experimentation that began in the 1960s. "You can certainly pick up HPV from a single sexual encounter," Sturgis says. "But the more sexual partners you have, the more likely they are to be exposed to HPV."

A new approach to treatment

Fortunately, for patients like Scott Davis, the prognosis is good. Survival rates for oropharyngeal cancer linked to HPV vary by stage, but may reach 90 percent or higher if caught early. "With proper treatment and close follow-up, for most people this is a curable illness," Joshi says.

But the standard treatment, an aggressive combination of just about everything oncologists can throw at the disease — chemotherapy, radiation and surgery — can have devastating side effects, including loss of the ability to salivate or swallow, as well as physically disfiguring surgery.

Many experts in the field suspect that HPV-related cancers could be effectively treated with less aggressive therapy such as robotic surgery, which would spare patients some of the worst side effects. "The patients we're seeing with HPV-related oropharyngeal cancers are younger and healthier than the patients we saw in the past, which means they'll have to live with some of the side effects of treatment far longer," Lewis says. "The question is, can we use less aggressive treatment and still eliminate the cancer without causing these terrible consequences?"

There's already good evidence that people with HPV-related cancer have a better prognosis than those with tobacco-related cancers. HPV-related cancers may have fewer mutations than tobacco-related cancers. They may also be more susceptible to chemotherapy and radiation. When Gillison compared treatment protocols for HPV-related oropharyngeal cancers at different medical centers around the world — some very aggressive, some much more conservative — she found that almost all of them were equally effective. "No matter how patients were treated, with chemotherapy alone, or chemotherapy and radiation, or a combination of everything, including surgery, HPV patients did extraordinarily well," Gillison says. "Between 90 to 95 percent were surviving to five years, regardless of how intensive the treatment."

Today, in clinical trials around the world, doctors are testing less aggressive protocols to see how well they work. At George Washington University Hospital, for example, Davis was treated with a combination of chemotherapy and surgery but no radiation. Other cancer centers are testing a variety of scaled-back treatment protocols.

The end in sight

Finding the most effective and least debilitating treatment is critical, but so is stopping the epidemic. And all it takes for that, many researchers say, is a series of shots in the arm.

In 2006, the Food and Drug Administration approved the first vaccine against HPV, called Gardasil. The vaccine was originally developed and approved to prevent cervical cancer in women. But there's every reason to think that it could be just as effective in preventing other HPV-related cancers, including oropharyngeal cancer.

But in order to be most effective, it has to be given to young people before they become sexually active. The CDC currently recommends Gardasil starting at age 11 and up to age 21 for boys and 26 for girls. Once someone has been exposed to HPV, the vaccine offers little protection.

Unfortunately, 4 in 10 adolescent girls and 6 in 10 adolescent boys haven't been vaccinated. "There's not much people in their 50s and older can do to protect themselves, but we can make sure a new generation of children won't be at risk," Gillison says.

Peter Jaret is a freelance health and science writer.