With the clock ticking, R.J. Ritter is on a hunt for an estimated 195,000 veterans exposed to radiation when the United States conducted atmospheric nuclear bomb tests between 1945 and 1962.

See also: Nuclear medicine could save your life ....

"We are in a race against time because atomic veterans are aging," says Ritter, national commander of the National Association of Atomic Veterans (NAAV) since 2006. 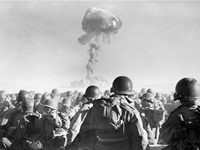 Troops watch an atomic explosion at close range at a government testing ground in the Las Vegas desert.

If these veterans have any one of 21 cancers traceable to radiation exposure, Ritter says, the men or their widows and children are entitled to a onetime award of up to $75,000 from the Justice Department under the Radiation Exposure Compensation Act of 1990, or a monthly disability payment of up to $2,673 from the Department of Veterans Affairs.

Finding these survivors is a tough challenge for Ritter, who is trying to get the word out. Their average age is 84, and the Defense Department estimates they are dying at a rate of 16,000 a year.

"We are trying to reach out to widows and children, too," says Ritter, 76, of Houston, a native of New Orleans and a Korean War veteran who became a marine engineer after his military service. He worked in the offshore oil industry for nearly 40 years.

Many unaware of benefit

NAAV was founded in 1979 by atomic veteran Orville E. Kelly to get recognition and compensation for these men and women, who took an oath never to reveal what they were doing, not to their doctors, their families or the public.

This "cloak of secrecy" oath was lifted in 1996 by then-Defense Secretary William Perry. Many veterans still do not know they are free to speak, or do not realize they are entitled to compensation if they can prove a cancer diagnosis was triggered by radiation exposure.

Veterans are eligible for up to a onetime $75,000 benefit if exposed during atmospheric nuclear testing or up to $2,673 a month if they were part of the occupational army in Japan after World War II and developed cancers that can be traced to this exposure. They must furnish their medical and military records as well as the location where they were exposed, information verified by the government.

Ritter himself was exposed to 18 nuclear tests as a Navy petty officer in the 1950s. Although he has dodged related health problems so far, he's acutely aware a deadly disease could pop up anytime.

Some 80 percent of his colleagues with him on a ship towing a nuclear warhead that was detonated in 1955 have died of cancers.

"I've been real lucky. That's why I do what I do, out of dedication to my shipmates," says Ritter, a volunteer working full time to find atomic vets.

No money for advertising

The NAAV has been piecing together the numbers of potential claimants, gaining access to nuclear test records and documents needed for the filing of claims. It has a private database with the written accounts of health problems involving 28,000 atomic veterans, many of whom are now deceased.

With no advertising budget or marquee advocate, NAAV has no organized campaign to get the word out. Two years ago, the Veterans of Foreign Wars published some information about NAAV, and Ritter got more than 10,000 inquiries. There has been some media coverage, such as a feature on the search for atomic vets by the Australian television version of 60 Minutes.

A total of 557,000 atomic veterans were exposed to lethal radiation. They include those who cleaned up the radioactive Nagasaki and Hiroshima sites after the war, prisoners of war in Japan when the bombs were dropped, and the thousands who witnessed 200 atmospheric nuclear tests conducted primarily in Nevada and in the Pacific Ocean — as the United States set off in a frantic Cold War effort to increase its arsenal of nuclear weapons, according to the Defense Department.

In the last three years, NAAV has helped 50 widows apply for benefits, but only a dozen have been successful in their applications, because it is difficult to prove their cases, Ritter says.

The government reports that only 1,641 claims have been approved for a onetime payment of up to $75,000 since 1992. Ninety percent are for veterans, the others for civilians working at the sites, according to Ritter.

The VA has granted at least 1,964 claims to date for monthly disability payments. The VA did not start tracking them electronically until 2006.

"A lot more could have applied," says Paul Blake, of the Defense Threat Reduction Agency, which has the records of the military personnel at every site and can verify an atomic veteran's presence at a deadly test.

Ritter underscores the urgency of finding these aging veterans.

"I am driven more by the fact these guys didn't know what they were doing. I didn't know what I was doing. I was 17," Ritter says. "I get great satisfaction in getting a call from someone who says, 'I just got my check. Thank you.' "

Also of interest: Medical imaging and too much radiation. >>