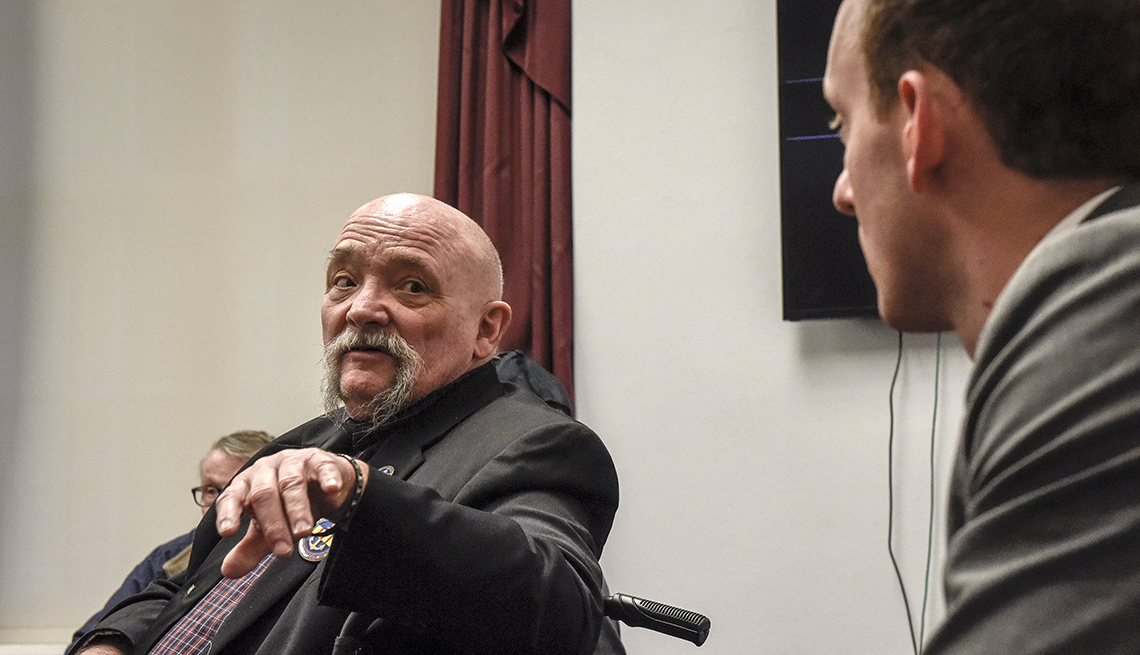 Mike Yates, left, is a blue water Navy veteran who served on ships off the coast of Vietnam during the war.

This article has been updated to reflect Veterans Affairs Secretary Robert Wilkie’s recommendation.

Secretary of Veterans Affairs Robert Wilkie agrees with veterans organizations: An appeals court ruling over “blue water” veterans — those who were stationed on ships off the shore of Vietnam – should stand. If accepted, his recommendation would mean that thousands more Vietnam veterans could get disability benefits for their exposure to Agent Orange, a chemical defoliant used during the war.

Wilkie’s recommendation not to appeal the ruling is not the final word, but it is consistent with the wishes of 10 veterans organizations that wrote to President Trump recently urging him to direct the Justice Department not to appeal the decision.

Wilkie told members of the Senate Armed Services Committee on Tuesday that he would recommend the Department of Justice not fight the court’s decision, a victory for the estimated 90,000 service members who did not have their illnesses recognized as related to Agent Orange exposure. But while Wilkie told lawmakers about his recommendation, he cautioned that he didn’t “know what other departments are doing” on the decision within the administration.

Sen. Richard Blumenthal (D-Conn.) told Wilkie that he was “grateful” for his recommendation and that the decision would “culminate a crusade that has been bipartisan."

On Twitter, the nonprofit group DAV said that the decision was “great news for Blue Water Navy Veterans!”

In January, the U.S. Appeals Court for the Federal Circuit ruled 9-2 that in passing the Agent Orange Act of 1991, Congress intended to include Vietnam’s territorial sea vets as beneficiaries for treatment of diseases associated with the chemical agent. The Department of Veterans Affairs (VA) has granted benefits only to veterans presumed to be exposed to the defoliant on the ground or on inland waterways but not those on ships offshore.

Alfred Procopio Jr., who served on the aircraft carrier USS Intrepid off the Vietnam coast, filed the appeal after being denied disability claims related to his diabetes and prostate cancer. The appeals court ruled that he was “entitled to a presumption of service connection.”

It added, “We find no merit in the government’s arguments to the contrary.”

Veterans groups now want the VA to abide by the ruling, which could lead to disability benefits for thousands, rather than appeal it. The VA has until April 29 to file an appeal to the Supreme Court.

The veterans groups’ letter, sent March 12, called on Trump to direct Wilkie “to immediately begin implementing this decision so that justice is finally provided to the men and women who served in Vietnam, suffered from the devastating long-term health effects of Agent Orange exposure, but who today are denied the benefits and health care they have earned.”

“We have urged the VA to accept this ruling and immediately start reviewing and adjudicating every incorrect decision dating back to 1997, as this is simply the right thing to do for veterans,” Dennis Nixon, national commander of DAV, said in a statement.

The VA is considering adding other diseases including bladder cancer, hypothyroidism, hypertension and Parkinson’s-like symptoms.

“Mr. President, a veteran is someone who at one point in their life wrote a blank check made payable to the United States of America, for an amount up to and including their life,” the letter said. “We ask that you and our grateful nation take another step towards meeting that commitment by NOT appealing Procopio v. Wilkie so that justice is not further delayed or denied to Blue Water Navy veterans.”

The White House has not responded to a request for comment.