En español | People who have a cheery outlook on life face a lower risk of stroke than their less optimistic peers, according to a new study.

Research has already shown that positive emotions can reduce the chance of developing heart disease and of being readmitted to the hospital after bypass surgery. 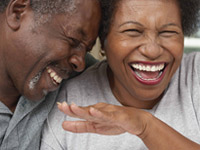 A positive outlook on life may lower your risk for stroke.

This study, from the University of Michigan, is the first to report a link between optimism and a lower risk of stroke among older men and women. "And the more optimistic they are, the less the risk," says psychologist Nansook Park, coauthor of the study.

The researchers analyzed data about optimism collected between 2006 and 2008 from more than 6,000 stroke-free participants in the long-running Health and Retirement Study, a representative sample of U.S. adults over age 50. They were, on average, 69 years old.

At the start of the study, the men and women completed a questionnaire about their outlook on life that asked them to rate how strongly they agreed or disagreed with statements such as "In uncertain times, I usually expect the best" and "I hardly ever expect things to go my way."

Two years later the research team used an optimism scale to analyze the association between optimism and stroke, taking into account other factors such as chronic illness, blood pressure, smoking, alcohol use and physical activity. The team found that the most optimistic participants were strikingly less likely to have suffered a stroke than the least optimistic.

Optimism, the researchers explain, is the expectation that more good than bad will come your way in the future. They note that optimism may protect people because those with a positive outlook make better choices such as eating well and exercising. "Optimistic people act in healthier ways," says Park.

But the effect of optimism may be more than simply looking at the world through rose-colored glasses. It may turn out that being an optimist has a biological influence. "That seems to be where some of the research is heading," says researcher Eric Kim, a study coauthor. "After all, depression and anxiety have a direct negative impact on the body, so theoretically why wouldn't factors such as optimism have a positive impact?"

"I'm not at all surprised that being optimistic is associated with health benefits," says neurologist Larry Goldstein, M.D., director of the Duke University Stroke Center, who was not involved in the study. "We know from many other studies that patients' attitudes can be incredibly powerful." But, Goldstein cautions, the study does not show that optimism causes lower stroke risk, simply that the two are associated. Optimism may be a marker for other behaviors or issues that weren't measured. "Still," he continues, "having a positive attitude certainly can't hurt."

The study was published in the July 21 online issue of Stroke: Journal of the American Heart Association.

You may also like: 6 ways to be happier, and healthier.