En español | Persistent tinnitus — a hissing or ringing sound in the head that won't go away — can feel like a prison that sufferers have no hope of escaping. It's no wonder some people become depressed or even suicidal.

Some 50 million Americans experience tinnitus, and around 12 million have sought medical help. Two to 3 million are severely disabled, unable to sleep, work or concentrate. 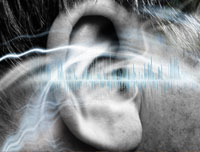 The ringing perception from tinnitus often occurs in the brain, not in the ears.

Until recently doctors couldn't do much to help those trying to cope with intrusive tinnitus, other than prescribe antidepressants or suggest "sound therapy" using devices that mask the ringing with white noise.

Now, though, scientists are uncovering the causes of tinnitus — and exploring intriguing new treatments that might lead to a cure.

Tinnitus (pronounced TIN-i-tuss or tin-EYE-tis) often occurs after exposure to very loud noises, although it also can arise from a head injury, certain medications or even age-related hearing loss. But recent research has shown that in most cases the perception of sound occurs not in the ears but in a part of the brain called the auditory cortex.

Michael Kilgard, a scientist at the University of Texas at Dallas, says brain circuits that process sound become hypersensitive to certain frequencies, creating a ringing sensation even when none is present.

In a recent study, Kilgard induced tinnitus in rats by exposing them to loud sounds. Then he used tiny electrodes to stimulate the rats' vagus nerve, a pathway connecting the brain to other organs. Each jolt of micro-current triggered the release of a substance called acetylcholine, which signals the brain to pay attention.

In sync with the stimulation, he played a wide range of tones — all except the one matching the frequency of their tinnitus — and repeated this 300 times a day for three weeks. The tinnitus disappeared in these rats, while a control group still had the condition.

Next: Retraining the brain. >>

In effect, Kilgard says, the rats' brains were retuned, unlearning the tendency to overfocus on one tone by increasing the number of brain cells dedicated to other sound frequencies.

Kilgard's study, published earlier this year in Nature, set the stage for a human trial by Dirk De Ridder, M.D., a neurosurgeon who heads a tinnitus clinic in Antwerp, Belgium.

De Ridder is implanting electrodes in 10 middle-aged tinnitus patients, each of whom has already tried various experimental techniques, including medication. He says he works with one patient at a time, as each undergoes vagus nerve stimulation coupled with sound therapy for 2 1/2 hours a day for four weeks. This is very much a pilot study, where the researchers hope to figure out some basic parameters (how long to continue treatment, among other things) that will guide a larger study.

"From the first preliminary results that we have, it still seems promising, but it will not be a hundred percent success rate," De Ridder says. Humans who have had tinnitus for a longer time than the rats, and who are more genetically diverse, are unlikely to respond in the same way, he says.

De Ridder's patients have a long, thin electrode threaded under the skin connecting the vagus nerve to a computer that synchronizes bursts of micro-current and tones. If this brain-training technique is eventually approved for human use, a more elegant option might be available from a Dallas company called MicroTransponder Inc., which is sponsoring De Ridder's trial.

Jordan Curnes, president of the company, says the firm has developed a tiny stimulator the size of three grains of rice that can be implanted in the neck next to the vagus nerve and be controlled by wireless signals.

MicroTransponder is exploring nerve stimulation to treat chronic pain and recover motor function in stroke victims, but the tinnitus technology holds the most promise, he says. "Nothing else has seen this much pre-clinical success," Curnes says.

Next: Does meditation reduce tinnitus symptoms? >>

A huge number of people potentially could benefit from technology to reprogram the auditory network, says Jennifer Born, public affairs director for the American Tinnitus Association.

Mindfulness practitioners typically learn to acknowledge an annoying experience such as tinnitus while letting go of the accompanying mental commentary that fuels anxiety and depression.

With the wars in Afghanistan and Iraq, "we started seeing a really young population of men and women who were experiencing tinnitus," she says, in part triggered by blasts from improvised explosive devices. Veterans receive upward of $1 billion a year in compensation for the condition, making it the most common service-related disability, she adds.

While commercially available brain-reprogramming technology may be years off, she says, "certainly it's more hope than we've had for a really long time."

Meanwhile, a federally funded study conducted by researchers at the University of California, San Francisco, aims to see whether an eight-week course of "mindfulness meditation" will reduce intrusive tinnitus symptoms for people who have been driven to seek treatment.

Mindfulness practitioners typically learn to acknowledge an annoying experience such as tinnitus while letting go of the accompanying mental commentary that fuels anxiety and depression. In theory, at least, that would allow the perception of tinnitus to fade into the background.

The randomized, controlled trial will follow up with participants over the course of a year to see whether the benefits, if any, are durable.