En español l Eyes may not be a window to the soul, as poets have claimed, but eyesight is certainly a window on the world. As boomers age, however, millions of them will struggle with some kind of eye disease. Over age 40, an estimated 25 million people have cataracts and more than 2.5 million have glaucoma; more than 2 million men and women over age 50 have age-related macular degeneration.

See also: Are you seeing spots? That spot may be a 'floater' 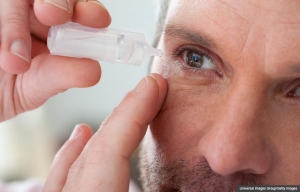 Eyedrops are the most common early treatment for glaucoma, one of three age-related eye diseases.

Unfortunately, eye diseases often sneak up on us without warning. Here's what experts say about these three common vision conditions — how they affect the eyes, who's at risk and what treatments are available — along with developments that will help protect your eyes in the years ahead.

Cataracts are a price that many of us pay for growing older. Light normally passes through the eye's clear lens to the retina, the light-sensitive area at the back of the eye. Sometime after age 40, small clumps of protein can form in the lens and cause it to become cloudy — and the loss of vision cannot be corrected with glasses or contact lenses. This clouding is called a cataract.

Treatment: There is no cure for cataracts; surgery is the only effective treatment. "Most people consider surgery only when reduced vision interferes with activities like driving, work or hobbies," says Richard Braunstein, M.D., of the North Shore-LIJ Health System in New York.

Before surgery a doctor will ask how you want to see out of that eye. You can choose a basic monofocal lens that will allow the eye to see clearly either close up or at a distance. You also can opt for a premium lens, such as one that corrects astigmatism, or a multifocal lens that can potentially restore a full range of vision without eyeglasses. Keep in mind that Medicare or private insurance won't pay the generally hefty extra cost of these premium lenses.

During the operation the surgeon will make a small opening in the cornea (the front part of the eye), insert a tiny high-frequency ultrasound probe to break the cloudy lens into fine particles, vacuum them out and then implant a clear artificial lens. It's often done in as little as 15 minutes. Painful? No, you'll receive an anesthetic eyedrop or injection as well as a sedative to relax you.

Looking ahead: A new procedure called laser-assisted cataract surgery uses a computer-guided laser to deliver pulses of energy to perform some of the steps that are now carried out with handheld instruments. Studies are now under way to evaluate the safety and advantages of this new technology. Private insurance or Medicare may not cover part of the cost. Ask your doctor.

The macula, a tiny area near the center of the light-sensitive retina, helps produce sharp close-up vision, enabling you to read fine print, recognize faces and sew on a button. Progressive damage to the macula knocks out central vision, although side vision remains clear. After age 50, the condition is called age-related macular degeneration (AMD).

A combination of factors, including family history, smoking and sunlight, plays a role in its development, says ophthalmologist Manju Subramanian, M.D., associate professor at the Boston University School of Medicine, but "we just don't know why some people get it and some don't."

AMD has two forms: dry and wet. The dry form generally progresses slowly over a period of years. According to Subramanian, about 10 percent of dry AMD cases progress to wet, which happens when new blood vessels under the macula leak blood and fluid. Wet AMD is more aggressive and can cause severe vision loss in a matter of weeks or months.

Treatment: The gold standard of care for wet AMD, she says, uses antibodies to help prevent the growth of leaky blood vessels in the eye. The therapy can actually improve vision, the only method to do so. There is no cure, but for someone with moderate or severe AMD — either dry or wet — supplements of high levels of antioxidant vitamins and minerals could slow its progression, according to a study sponsored by the National Eye Institute. These supplements don't benefit people with early AMD.

Looking ahead: A small clinical trial tested the safety — but not the efficacy — of transplanted human embryonic stem cells to treat people with problems affecting the macula. Four months after the procedure, the researchers found no safety concerns, no signs of rejection and no abnormal cell growth. Larger trials are in the offing for this groundbreaking development.

Your risk for glaucoma goes up if you are over 45; have a family history of glaucoma; are nearsighted or farsighted; are African American or Hispanic; have diabetes, migraines or low blood pressure.

Some researchers no longer think of glaucoma solely as an eye disease, but rather as a neurological disorder associated with nerve cells in the brain that degenerate and die, similar to what happens in Parkinson's and Alzheimer's diseases. For many years, doctors believed that increased pressure within the eye brought about glaucoma's damage, so the only goal was to lower pressure with surgery and medications.

"Yet some people with mildly elevated pressure may never develop glaucoma, and most people with glaucoma never had very high eye pressure," says Jeffrey Goldberg, M.D., professor and director of research at Shiley Eye Center at the University of California, San Diego. "Although eye pressure is a risk factor for glaucoma and contributes to the damage, we don't use pressure alone to make the diagnosis," Goldberg says. "We also look for characteristic changes like loss of peripheral vision and damage to the optic nerve."

Left untreated, glaucoma can cause blindness. Only about half the people who have the disease are aware of it. There are usually no early symptoms because glaucoma progresses slowly and affects peripheral vision first. "People tend not to notice that they're losing their peripheral vision until much later in the disease, when it starts to creep in and affect their central vision," Goldberg says. "Because we don't have a proven way to undo the damage of glaucoma, we can only try to prevent further loss of sight."

Treatment: Eyedrops to lower pressure are the most common early treatment. Surgery may be recommended to improve the flow of fluid out of the eye and control pressure.

Looking ahead: Research focuses on damage to retinal cells that connect the eyes to the brain. Medications that slow down the death of these cells and protect healthy cells are in clinical trials. Some are injected into the eye, some are slow-release implants surgically placed in the eye and some are eyedrops.