Walking at a moderate, consistent pace on a treadmill improves mobility in people with Parkinson's disease, a new study reports.

See also: Exercise is the fountain of youth. >>

The study found that for men and women with Parkinson's, 50 minutes of moderate but continuous walking three times a week helped improve how fast and how long they could walk, as well as their aerobic fitness.

"Difficulty walking is the greatest cause of disability in people with Parkinson's disease," said Lisa M. Shulman, M.D., professor of neurology at the University of Maryland School of Medicine, who presented the study. These findings, she said, have important implications for how people manage the disease because "low-intensity exercise can be done by most people with Parkinson's."

Shulman presented the results April 9 in Honolulu at the 63rd annual Meeting of the American Academy of Neurology.

Although earlier research had shown vigorous, high-intensity exercise to be the most effective way to improve problems with mobility and balance, Shulman said her study found that longer, low-intensity exercise was better. People doing a low-intensity workout significantly improved their performance in a six-minute walk test, which measured how far they could travel in that time. But those assigned to a more strenuous treadmill workout did not. 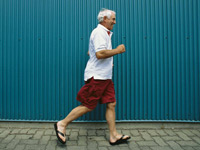 The study involved 67 people with Parkinson's who had problems walking. The individuals were randomly assigned to one of three exercise groups for three months. One group walked on a treadmill for 50 minutes; a second group was assigned to higher intensity treadmill training for 30 minutes; and a third group instead used weights and stretching exercises for muscle strength and range of motion in their lower body.

Although the researchers saw positive effects with all three types of exercise, those in the low-intensity group and the stretching and weights group showed significant improvement on the six-minute walk test — but the high-intensity group did not.

In other findings, cardiovascular fitness improved significantly for both treadmill groups but not for the stretching and resistance group. Finally, only the weights and stretching group had a significant improvement on the motor scale of the Parkinson's disease rating scale.

"Our results suggest that a combination of low-intensity training and stretching-resistance training may achieve the greatest improvements for people with Parkinson's disease," Shulman said.

Commenting on the study, Rajesh Pahwa, M.D., professor of neurology at the University of Kansas Medical Center, points out that all three groups improved. "Exercise is good," he says, for people with Parkinson's. However, he warns that the benefits of high-intensity exercise should not be dismissed because other studies on animals with Parkinson's have found that high-intensity exercise protects brain cells affected by the disease.

"I would not be surprised if in the future we have other studies showing high-intensity exercise had other benefits this study did not measure," Pahwa says.

Bob Kirsch is a health and medical writer based in New York.