The 7 Worst Habits for Your Brain

Bad choices and everyday missteps could harm your cognition. Here's how to combat several of them. 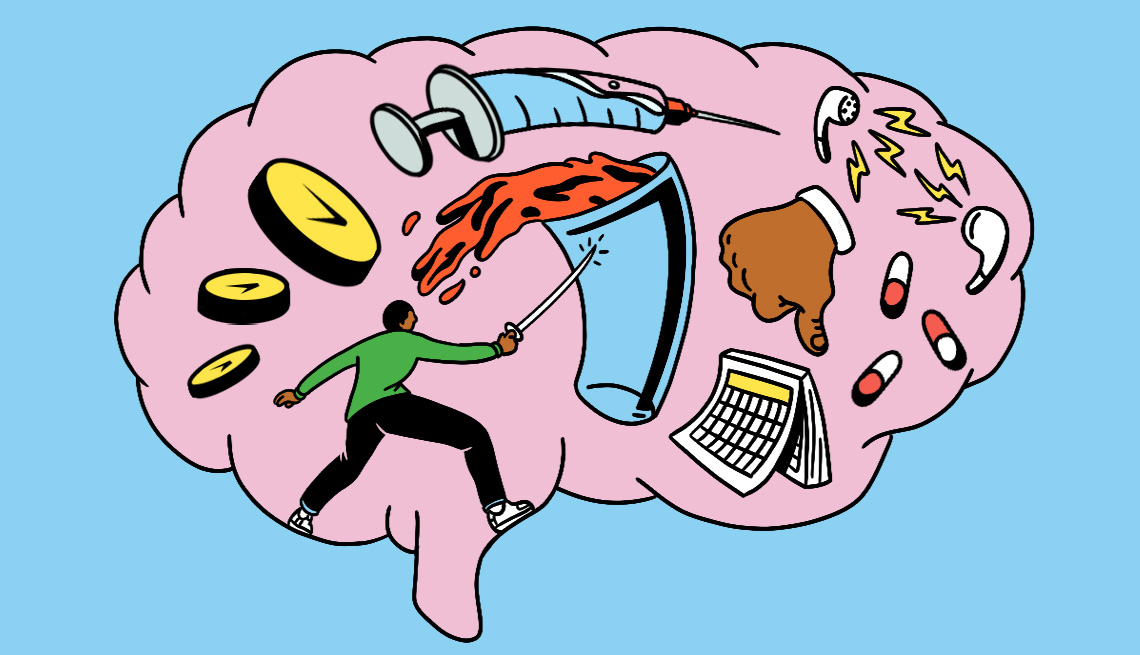 You already know that a bad diet and a permanent indentation on the couch aren't good for your brain. But there are some lesser-known daily routines that could be undermining your cognition, says Jessica Caldwell, a neuropsychologist and director of the Women's Alzheimer's Movement Prevention Center at the Cleveland Clinic. Altering just one of these habits could change how your brain works — and help you age healthier and better. And it's never too late to start. Even people with memory issues can benefit from altering harmful behaviors.

1. You accentuate the negative

Ruminating on grudges, resentments and negative thoughts won't just keep you in a pessimistic mood; it has also been linked to a decline in cognition and memory in people 55 and older, according to a study in the journal Alzheimer's & Dementia. Participants who repeatedly dwelled on negative thoughts had more amyloid and tau deposits in their brain, the biological markers of Alzheimer's disease.

Everyone engages in repetitive negative thinking to some degree. “It's part of the human experience, and not everyone will develop Alzheimer's,” says lead researcher and research psychologist Natalie Marchant. But it's also a changeable behavior, according to Patti Johnson, a psychologist in Los Angeles and creator of the anxiety-relief app EmMa, the Emotional Manager for Anxiety. She suggests that, the next time you're overtaken by negative thoughts, you should do the following:

Make a list of five specific things that you are grateful for, and focus on those.

Take some deep belly breaths, try a new task, or change your focus to something in your environment.

Greet a negative thought when it pops up with “Hello,” then verbally tell it “Goodbye.”

2. You skip your vaccines

It's estimated that more than half of Americans blew off the flu shot during the 2018–19 flu season, and we know how many people are hesitant about getting a COVID-19 vaccine. But opting out of vaccinations may be a missed opportunity in the fight against dementia. For people between the ages of 75 and 84, influenza vaccination was associated with a reduced likelihood of developing Alzheimer's disease, according to research led by Paul Schulz, M.D., a neurologist at McGovern Medical School at the University of Texas Health Science Center in Houston. Other researchers have found that people ages 65 to 75 who had received the pneumonia vaccination had a 25 to 30 percent reduction in their chance of developing Alzheimer's.

More research is needed to understand whether vaccinations play a role in protecting cognition, says Rebecca Edelmayer, senior director of scientific engagement for the Alzheimer's Association. But the takeaway here, Edelmayer says, is that “vaccinations are one of the most studied and well-tested preventive care measures for your health."

If your usual breakfast includes a tall glass of orange juice, take note. A 2017 study associated sugary beverage consumption with poorer episodic memory as well as lower total brain volume and hippocampal volume. So avoid soda and sweet tea, and take it easy on the juice. “Even though fruit juice retains some beneficial phytonutrients, it's primarily a sugary drink without the benefit of fiber,” says Annie Fenn, M.D., the founder of Brain Health Kitchen, a cooking school and community for Alzheimer's prevention. Consuming sugary drinks may lead to spiking blood sugar and an exaggerated insulin response in many people, which, she says, may trigger chronic inflammation in the brain.

It may be far better to eat whole fruits, not their juices. “A small orange provides 2.5 grams of fiber to balance its 9 grams of sugar,” Fenn explains. “When you consume the equivalent amount of orange juice, the fiber has been strained out.”

4. You have unhealthy sleep habits

Quality sleep is crucial to a sharp and productive mind, according to the Global Council on Brain Health. Consistency is one important marker of good quality sleep: Go to bed and wake up at the same time every day. Shift work, changing time zones, chronic stress and too much caffeine or alcohol can all throw off your rhythm. So, too, can sleeping in a room that's not cool or dark enough. And if you have symptoms of sleep apnea, such as snoring or daytime sleepiness, see a doctor. “Abnormalities in oxygen level can be damaging to nerve cells, which may accelerate over time and contribute to more memory and cognitive issues,” says Alon Avidan, M.D., director of the Sleep Disorders Center at the University of California, Los Angeles.

5. You crank up your headphones

If it's bad for your ears, it could very well be bad for your brain. In a study of 639 adults ages 36 to 90, mild hearing loss was associated with a nearly twofold likelihood of dementia.

As a rule, if someone else can hear sound from your earbuds, they're too loud, says Nicholas Reed, assis-tant professor at the Johns Hopkins Bloomberg School of Public Health. He also recommends carrying a pair of foam earplugs with you and using them at concerts or sporting events, and removing yourself from loud environments when possible. “If you are standing within 3 feet of someone and you can't hear them, the world around you is too loud,” he says.

6. You regularly take this type of medicine

A wide array of drugs — including tricyclic antidepressants, some overactive bladder medications and some over-the-counter antihistamines — can block the actions of acetylcholine, a brain chemical important for learning and memory. A study found that a higher cumulative use of these drugs was associated with increased incidence of dementia.

If you regularly take a drug in one of these categories, don't panic, says Yuko Hara, director of aging and Alzheimer's prevention at the Alzheimer's Drug Discovery Foundation. But if you regularly take a number of these, it makes sense to ask your doctor about the risk of anticholinergics and to discuss whether you should explore alternate medications or other options.

7. You don't have a sense of purpose

Bosses, kids, spouses — when we're younger, it seems like everyone is relying on us. But when we get older, freedom from those responsibilities can have a darker side, as well. “Having a reason to get up in the morning, knowing that people are depending upon you, feeling that you are making important contributions can contribute to healthy aging,” explains Scott Kaiser, M.D., a geriatrician at Providence Saint John's Health Center in Santa Monica, California. Researchers at the Rush Alzheimer's Disease Center in Chicago found an association in people who scored high on a purpose-in-life assessment: They were approximately 2.4 times more likely to remain Alzheimer's-free than those with low scores.

If you're feeling a distinct lack of purpose, do your brain a huge favor by embracing some new responsibilities, says Carla Marie Manly, a clinical psychologist in Santa Rosa, California. “Find a new opportunity by using the time and energy not spent on child-rearing or working to get a pet, explore a passion project, volunteer or travel,” she says.

Research shows how men's, women's brains may experience it differently