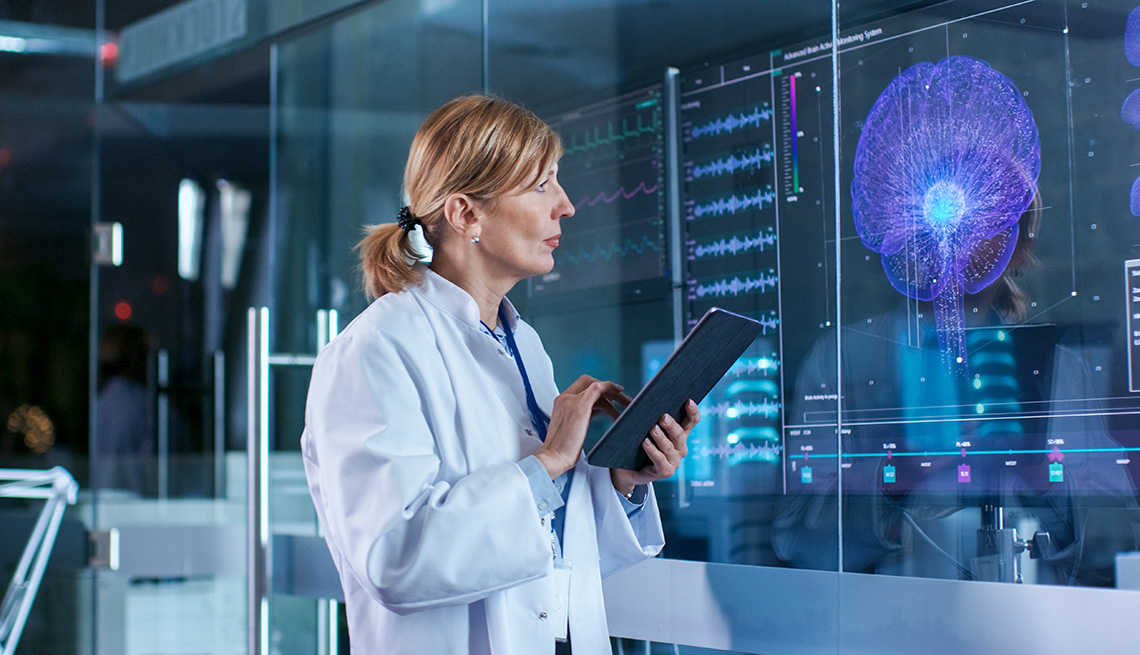 En español | Almost two-thirds of Americans living with Alzheimer's disease are women, and women in their 60s are twice as likely to develop Alzheimer's as they are breast cancer. They're also more likely than men to develop the brain disease, even after factoring in women's typically longer lifespans. New research presented today at the Alzheimer's Association International Conference 2019 suggests that sex-specific genes and crucial differences in the brain may help explain why women appear to be more at risk for this devastating disorder.

"These new studies make clear that there are biological and perhaps environmental factors that account for sex differences,” says Gary Small, M.D., Parlow-Solomon Professor on Aging at the David Geffen School of Medicine at UCLA. “Just like we take gender into account when determining risk for other health conditions, like depression or heart disease, we need to be aware of its impact on Alzheimer's, as well."

Four studies presented today make clear that the brains of women are structured differently than men, and that that in turn may impact risk of Alzheimer's.

In the study, researchers gave over 1,000 older adults brain scans to measure levels of amyloid plaque, one of the hallmarks of the disease. They also measured how well the participants’ brains metabolized glucose in regions affected by Alzheimer's. “Glucose is the primary energy source of the brain, so having trouble metabolizing it could indicate brain dysfunction,” explains study author Erin Sundermann, a neuropsychologist at the University of California San Diego School of Medicine.

Then when they gave both men and women verbal memory tests, they found, not surprisingly, that women were able to outperform their male peers when mild to moderate amyloid plaque was present. But they also discovered that women were metabolizing more brain glucose. “This suggests that women actually have better brain efficiency, and that they're able to use the glucose to help compensate for a growing brain deficit,” says Sundermann.

But this advantage disappears once more severe amyloid plaque develops, and “that's when glucose metabolism in women just tanks,” she adds. “Once they can't compensate any longer, their memory starts rapidly declining."

A second study to shed light on why women may be more susceptible to Alzheimer's focused on a different hallmark of Alzheimer's called tau, another kind of a brain protein that clumps as it forms, causing brain cell death. Researchers at Vanderbilt University Medical Center examined tau in the brains of both men and women who had mild cognitive impairment (MCI), which is a precursor to Alzheimer's, and in a healthy control group.

They found that women with MCI not only had more tau but more complex networks of it. “The good news is that, initially, women are able to overcome challenges related to Alzheimer's more easily, since they draw on the greater networking power of the brain,” explains Maria Carrillo, chief science officer of the Alzheimer's Association. “But the bad news is once the tau tangles have spread all along those networks, it leads to a more rapid cognitive decline."

A third study presented today reveals 11 different sex-specific genes for both men and women that may predispose them to Alzheimer's. Certain genes, such as MCOLN3, raise the risk only in men, while others raise the risk only in women. While this research is still in its infancy, eventually it may be able to be used to pinpoint those at higher risk of disease. “No one has ever looked at how genetic risk factors in men and women may interplay differently with women's hormones and life course, such as childbirth and going through menopause,” says Carrillo. “What this research all shows is that women are differently activated — our biology is different, our genetics is different, and our life course is different.”

Finally, on the question of women's Alzheimer's risk, a UCLA study looked not at genetics or brain proteins but at the effect of one aspect of a woman's life course — working outside the home — on future memory decline.

When researchers studied over 6,000 women born between 1935 and 1956, they found that those who worked in early adulthood and middle age experienced about a 60 percent slower memory decline in their 60s than women who were not employed.

"We found that the average memory performance of women who hadn't worked declined more than twice as fast as those in the workforce,” explains study author Elizabeth Rose Mayeda, an assistant professor of epidemiology at the UCLA Fielding School of Public Health.

“It's not surprising, since working stimulates cognitive reserve — you're more likely to be exposed to challenging problems that force your brain to work on overtime,” says Helen Fernandez, a geriatrician at Mount Sinai Hospital in New York City. There are also monetary and social benefits that may factor in, too, she adds — for example, interacting with coworkers and feeling financially independent from a spouse.

While the study looked at women's work experience only before the age of 50, they note that the results are still relevant to older women. “Women over 50 are the ones most likely to give up their job or retire early because they are caregiving for older parents or other loved ones,” explains Fernandez. “But 20 years down the road, they are going to be the ones who suffer from more cognitive impairment and dementia. We always hear about the struggle for work/life balance in younger women, but we also need to think of ways to better support women in middle age so they can maintain an active work life, given the clear cognitive benefits."