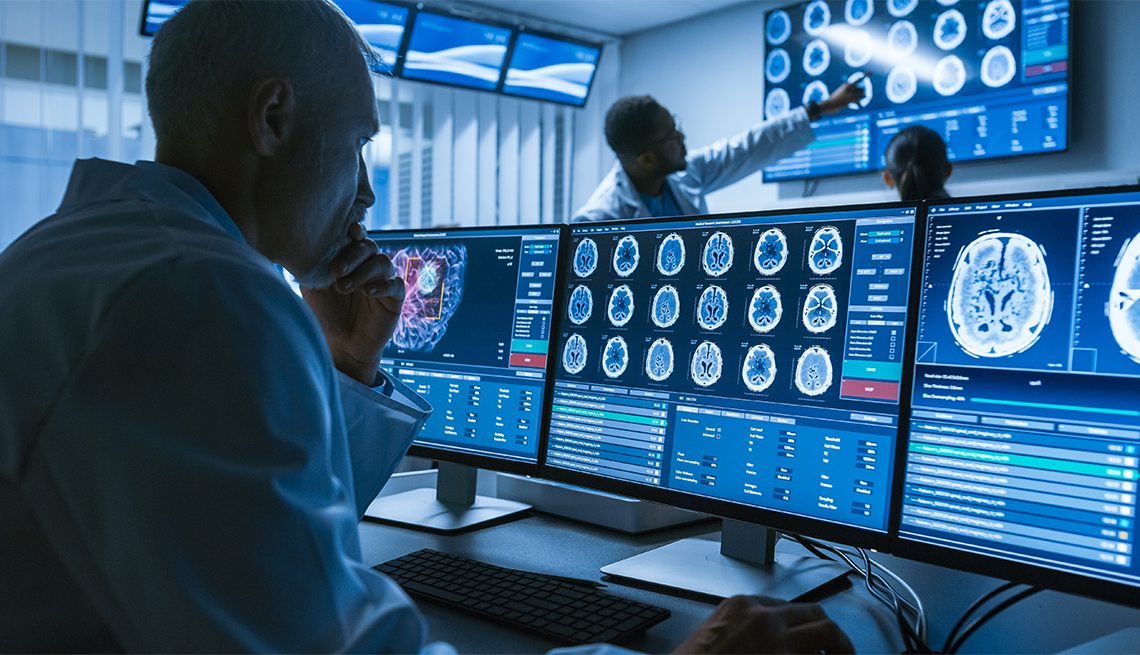 En español | Alzheimer's researchers are exploring a number of new approaches and testing a variety of potential treatments to help the almost 6 million Americans living with the dementia-causing disease.

At a recent gathering — the 12th annual Clinical Trials on Alzheimer's Disease (CTAD) — experts shared some fresh findings, including a new use for a drug now used for Parkinson's disease and new hope from an old drug trial.

Hallucinations, delusions and paranoia are common symptoms of Alzheimer's disease and dementia. But for the more than 2 million Americans who experience them, there is no federally approved treatment to curb them.

That could soon change. A drug previously approved for Parkinson's-related psychosis, called pimavanserin, may also help people with dementia, according to results presented at CTAD. Research on the drug was stopped before the trial's end when early results showed the medication could prolong the time between psychotic episode relapses.

The findings are “a big deal,” says Laurie Ryan, an Alzheimer's expert in the Division of Neuroscience at the National Institute on Aging (NIA). Dementia-related psychosis is very difficult for both people with dementia and their caregivers, and it's oftentimes the reason why someone is no longer able to live at home, she explains.

"Some facilities won't even handle patients who have those active symptoms and will send them to an [emergency room], which is really the last thing you want to do for dementia patients because they need the structure” and familiar environments, Ryan adds.

Acadia Pharmaceuticals, which makes pimavanserin, plans to discuss the study's results with the Food and Drug Administration (FDA) in the first half of 2020. If approved for use in people with dementia, pimavanserin would be the first new medicine made available for people living with Alzheimer's in decades.

Meanwhile, drugmaker Biogen Inc. plans to seek FDA approval in early 2020 for a medicine that could slow mental decline in people living with Alzheimer's disease.

Biogen suspended testing of its drug, aducanumab, last spring after an initial evaluation found it was likely ineffective in treating Alzheimer's. But several months later, the company reversed course, citing additional data from the trials that showed patients with mild cognitive impairment or early dementia who received higher doses saw improvements in mental and physical functioning. Aducanumab targets beta amyloid – a protein that abnormally accumulates in the brains of people with Alzheimer's disease.

Biogen's news was a surprise to the scientific community, and the results presented at CTAD left some researchers wanting more proof of aducanumab's effectiveness.

Ryan, with the NIA, says it's unfortunate that the one trial that showed some positive results ended early, soon after higher doses of aducanumab were given to participants. “Maybe if they had let the trial go on the full time you could have a definitive result, but this is not a definitive result,” she says.

However, Heather Snyder, vice president of medical and scientific relations at the Alzheimer's Association, calls Biogen's submission “an important moment in the Alzheimer's field.”

"I think everyone that's living with Alzheimer's and all of those that are caring for them are going to watch and await the review of the data by the FDA,” Snyder says.

Reducing amyloid in people with Alzheimer's disease is one treatment approach researchers are exploring. Experts are also studying different pathways, including the roles of inflammation, diabetes and antiviral therapies on Alzheimer's disease.

While one trial looking at the effectiveness of an anti-seizure medication in slowing the progression of Alzheimer's is something to keep an eye on, Ryan says, “it's become clear” that treating Alzheimer's disease won't come down to a single pill or prescription. “Ultimately what we're going to need is a precision medicine approach. My risk profile for getting Alzheimer's … might be very different from yours, and so I maybe need a different regimen or treatment.”

Lifestyle modifications will also likely be a big part of future Alzheimer's treatments. Researchers are continuing to study how diet, exercise and chronic disease management impact the development and progression of Alzheimer's. To date, several studies have shown that exercising and maintaining low blood pressure reduce one's risk for dementia and help slow its progression in those who have it.

"We can't impact our genetic makeup and other things, but we have some control over our lifestyle factors,” Ryan says.