In one study, scientists found that a history of exercise seemed to fend off brain damage in people who carry a gene that is linked to an increased risk of Alzheimer’s. A second study concluded that people who keep their minds active throughout their lives have lower amounts of a protein that forms the beta amyloid plaques, which are a hallmark of the disease. 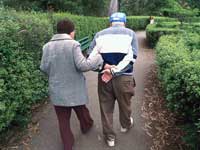 Regular exercise can help lower your risk of getting Alzheimer's.

The exercise study focused on 163 adults, ages 45 to 88, who showed no obvious signs of dementia. They were asked to fill out a questionnaire to measure how much they had walked, run or jogged in the last 10 years.

The participants then underwent a positron emission tomography (PET) brain scan, a kind of imaging test that detects the telltale protein. Carriers of the high-risk gene who had exercised regularly had protein levels similar to people who lacked the gene, while those who did not exercise at all showed much more extensive amyloid deposits, said lead author Denise Head, an associate professor of psychology at Washington University in St. Louis.

“Exercise is number one,” says Rudolph Tanzi, director of the Genetics and Aging Research Unit at Massachusetts General Hospital. “What seems to happen is, during exercise, the brain turns on the enzymes that break down the amyloid,” he says, “so for prevention, I think the strongest data comes with physical exercise.”

In the second study, scientists at the Helen Wills Neuroscience Institute at the University of California in Berkeley asked 65 healthy older people with no symptoms of Alzheimer’s how frequently they participated in mentally stimulating activities such as reading, writing and playing games at ages 6, 12, 18 and 40 — as well as currently. Then their brains were scanned for signs of beta amyloid protein using the same technique employed by researchers in the Washington University study.

Previous research has found that the more education you get, the lower your risk of Alzheimer’s, leading to a theory that greater mental activity creates “reserves” in the brain that allow people to better tolerate protein buildup. But the new study shows that isn’t the case, says Landau. “We’re actually showing that the cognitive activity” reduces the first signs of the disease she said. Rather than protecting against the disease, the intellectual stimulation may be keeping the disease from developing in the first place.

Samuel Gandy, M.D., director of the Mount Sinai Center for Cognitive Health in New York and a leading Alzheimer’s researcher, said that while the Washington University study reinforces the current recommendation to exercise as a way of lowering the risk of dementia, many questions need to be answered before researchers start developing recommendations for mental exercise.

“How do you compare crossword puzzles with violin playing? Which is better? How many times per day? How many days per week?” says Gandy. “It is easy to reduce physical activity to a prescription, but harder to do the same for mental exercise.”