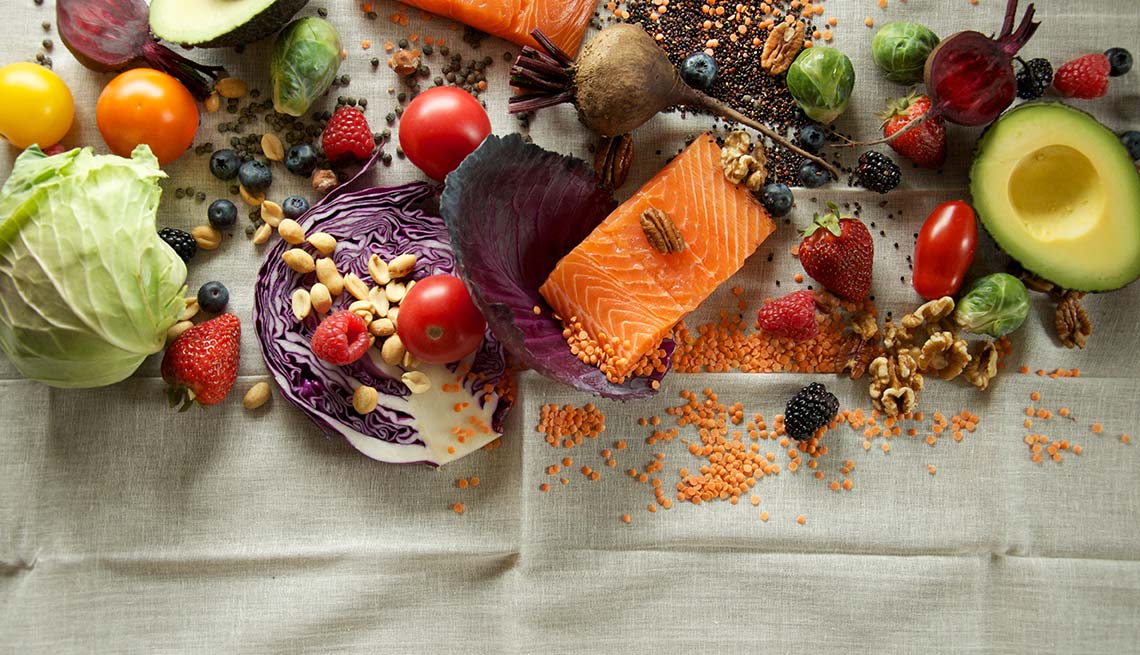 When Food Network chef Dave Lieberman and New York Times science writer Anahad O'Connor surveyed the growing pantheon of so-called superfoods, they found many that were health-promoting powerhouses — but also many that were expensive, tricky to cook with and not particularly tasty. So the two set out to create their own list of foods that have scientifically supported health benefits and also are "affordable, appealing and versatile in the kitchen." O'Connor narrowed the list to 20, and Lieberman reduced that by half. The result was their co-authored cookbook, The 10 Things You Need to Eat, and More than 100 Easy and Delicious Ways to Prepare Them. For AARP.org, Lieberman discussed the merits of these superfoods and offered recipes for using them.

Put them in brownies. Seriously. "The natural creaminess of avocado makes it a great substitute for creamy, saturated milk fat such as butter and cream," says Lieberman, "which is why you can make delicious brownies, smoothies and other desserts with avocado as the main source of fat."

Though avocados contain more fat than almost any other fruit, it's virtually all monounsaturated fat whose many benefits include raising good cholesterol, lowering bad cholesterol and preventing heart disease. And if that weren't enough, it's high in fiber, low in calories, and even higher than bananas in the blood-pressure-reducing mineral potassium.

If you ate canned beets as a kid and think you hate them, try them again. They are "nature's multivitamin," according to Lieberman and O'Connor, who say the beet contains a greater range of nutrients ounce for ounce "than virtually any other fruit or vegetable on the planet." The antioxidants that turn beets deep red also fight off free radicals that attack the body's cells and can lead to aging and disease including cancer. Compounds in beets also have been shown to lower blood pressure and cardiovascular disease risk, and to help cleanse the body of harmful chemicals in processed foods, such as nitrates. "Beets are surprisingly versatile," Lieberman says. "They can be eaten raw or cooked and are delicious cold and hot."

Forget those fancy exotic berries like the Acai from the Brazilian rain forest. North America's berries are just as laden with antioxidants, more economical, and versatile and tasty to boot. Raspberries, blackberries, strawberries and blueberries make their "all-star team of superfruits." Each should be added equally to a diet to reap their individual benefits: strawberries for potassium, raspberries for vitamin C, blueberries for fiber and blackberries for vitamin E and more. "It's not hard to come up with crowd-pleasing recipes with berries," Lieberman says. "But making both sweet and savory dishes with berries was an adventure for me, and it turned out great."

In the super-healthy family of cruciferous vegetables that includes broccoli and cauliflower, cabbage is a standout. Scientists have identified compounds in cabbage that reduce the risk of cancers — including breast, stomach, lung and prostate cancer — as well as heart disease, gastrointestinal problems and Alzheimer's disease. Cabbage is also a rich source of vitamins A, C and K, which protects joints and can lower the risk of osteoarthritis. Lieberman contends that "probably the biggest misconception about cabbage is that it needs to be cooked forever. That's not true at all. It's fantastic raw, and even with very brief cooking times in quick curries and stews."

The 10 Things categorizes "Super Fish" as those low in contaminants and high in the omega-3 fatty acids in fish oil — chief among them, salmon, Arctic char, halibut and rainbow trout. Studies show that regularly consuming such fish can help lower blood pressure and reduce inflammation; and that the fish oil in them provides a brain-nourishing compound that can slow the mental decline associated with aging. Lieberman said cooks increasingly can find "lots of simple, quick fish recipes that take the worry and stress out of cooking fish," such as his recipe for Roasted Salmon over French Lentils, Tomatoes, and Fennel, which includes not just one but three of his 10 superfoods.

Learn to like 'em. As nutritionists increasingly warn of the health risks of consuming too much red meat, lentils are a near-perfect substitute: When mixed with rice or another grain, these little legumes form a complete protein with all the amino acids the body needs. Lentils have no cholesterol, virtually no fat, and high proportions of soluble and insoluble fibers that help manage blood sugar, lower cholesterol and aid digestion. They're also packed with vitamins and minerals, including iron. "Lentils are so good for you, they're worth keeping around all the time," Lieberman says. "A good tip for doing that is to make a big batch and slightly undercook the lentils, refrigerate them once they're cool, and then use them as needed in your recipes for everything from salads to stews."

Forget the "food fallacies" of nuts being fattening snack food, say O'Connor and Lieberman: Almonds, cashews, hazelnuts, walnuts and peanuts (technically a legume) actually are full of heart-healthy fats that boost "good" cholesterol. They cite findings that adding a few servings of nuts a week dramatically reduces people's risk of cardiovascular disease — and other studies that found regular nut consumption actually made people less likely to gain weight. In researching nut recipes, says Lieberman, "My biggest Eureka Moment came with making a cream sauce out of cashews. It was truly a revelation — eating is believing!"

Many Americans never have heard of this grain (pronounced keen-wah). But according to NASA scientists tasked with feeding astronauts in space, quinoa comes as close to supplying "all the essential life-sustaining nutrients … as any (food) in the plant or animal kingdom." Quinoa is very high in fiber, protein and minerals, and very low in calories and in fat. Studies have shown eating a daily bowl can lower rates of obesity, breast cancer, heart disease and Type 2 diabetes. "Quinoa has become a staple in my house since writing this cookbook — I love it more than ever," Lieberman says. He incorporates it in a wide range of recipes, including Linguine and Quinoa Meatballs with Tangy Tomato Sauce.

It's "kryptonite to cancer cells," the authors say. Spinach contains so many anti-oxidants "that in some ways it's the equivalent of two or three servings of vegetables in one." Besides scoring high in the USDA measure of food's ability to rid the body of free radicals, spinach is packed with other nutrients including calcium, vitamins A and K, and omega-3 fatty acids. "I try to eat spinach every day," Lieberman says. "This is actually possible because spinach is so quick and easy to cook. I'm talking five minutes or under in lots of recipes."

Over the past decade, such authorities as the Harvard School of Public Health and the International Journal of Cancer have noted that regular consumption of tomato products can reduce the risk of cancer and heart disease, thanks to tomatoes' powerhouse combination of vitamins and phytonutrients such as lycopene. Because cooking actually enhances tomatoes' health-promoting properties by making nutrients more easily absorbed, Lieberman considers canned tomatoes "a good alternative to fresh; quick, easy and inexpensive. The news about cooked tomatoes actually being healthier opened the field wide open for me to a great range of recipes, from pizza to tomato-based stews."