Television today offers plenty: series and dramas, news and documentaries, movies and miniseries. The choices — on network, cable and streaming — can be overwhelming. Not to worry. We’re here to help you sort it out.

Critic’s Pick of the Week 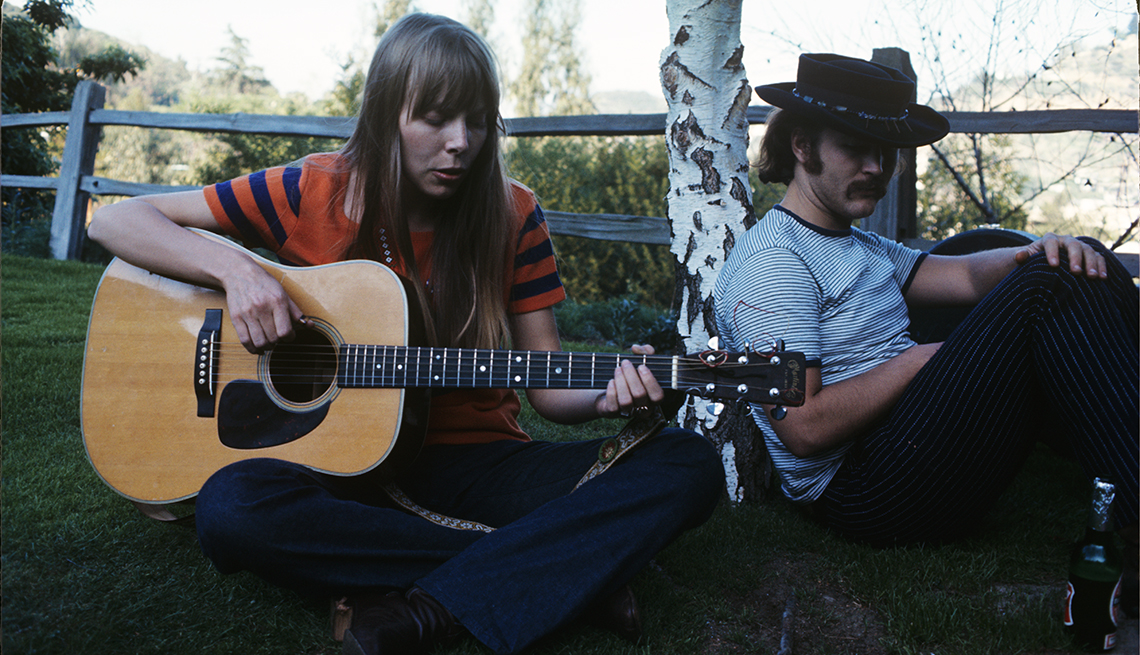 Joni Mitchell (left) playing the guitar next to David Crosby in 1968.

Take a time trip to the ’60s, when in L.A.’s woodsy Laurel Canyon all you could hear at night was owls — until it was invaded by the greatest musicians on Earth, who wrote songs about it like Joni Mitchell’s “Ladies of the Canyon.” The two-part doc has rare historical footage and new interviews featuring Crosby, Stills and Nash, the Byrds, Michelle Phillips of the Mamas & the Papas, the Doors, the Eagles, Linda Ronstadt and Jackson Browne.

Want more ’60s in your life? Check out our picks for the best films of that remarkable decade here: Stream the Best Movies From the 1960s 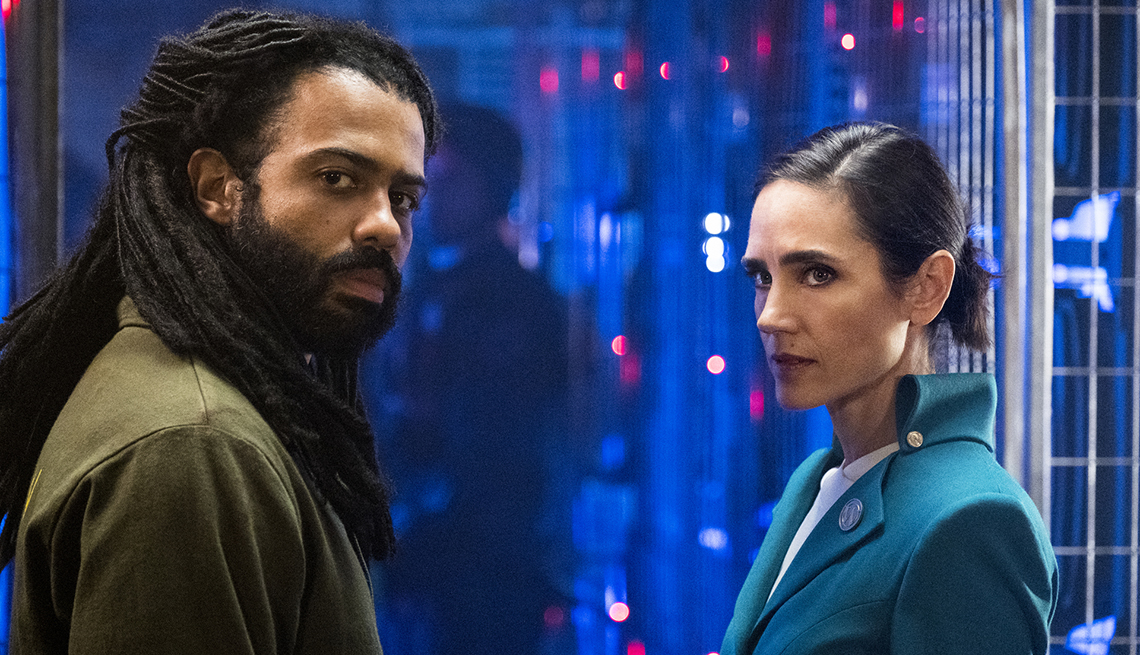 Snowpiercer, based on the 2013 film by Oscar winner Bong Joon Ho (Parasite), is a smart SF show for grownups, about a massive train that carries what’s left of humanity around the world after an attempt to stop global warming causes a new Ice Age. In her first TV show in 20 years, A Beautiful Mind Oscar winner Jennifer Connelly, 49, plays the Voice of the Train, who tries to keep the upper crusters up front and the lowly “Tailies” in their place toward the caboose.

The One All ‘The Office’ Fans Have Been Waiting For... 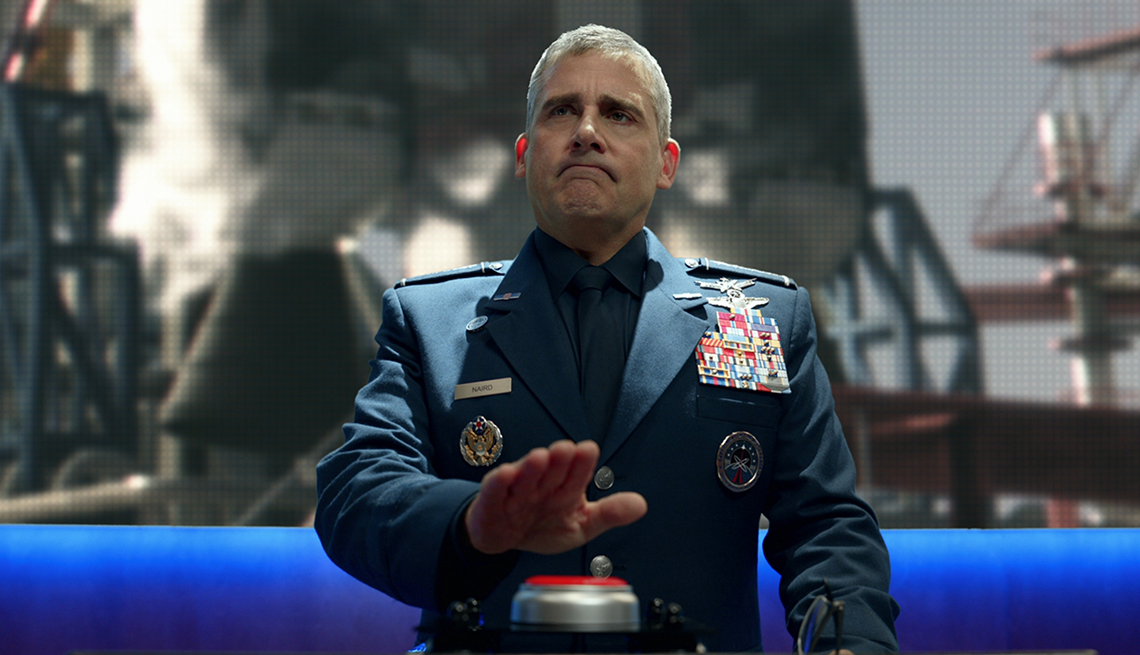 Steve Carell, 57, teams with the creator of The Office for a show about an Air Force general (Carell) ordered to put U.S. boots on the moon ASAP — much to the displeasure of his wife (Friends’ Lisa Kudrow, 56). The terrific grownup cast includes John Malkovich, 66, as the scientist trying to talk sense to the general, who’s trying to please an unnamed President whose tweets contain amusing misspellings. The show isn’t as funny as many Office fans hoped, but it’s passable enough to add to your quarantine diversions.

And a Provocative Pair of Shows Arriving This Week 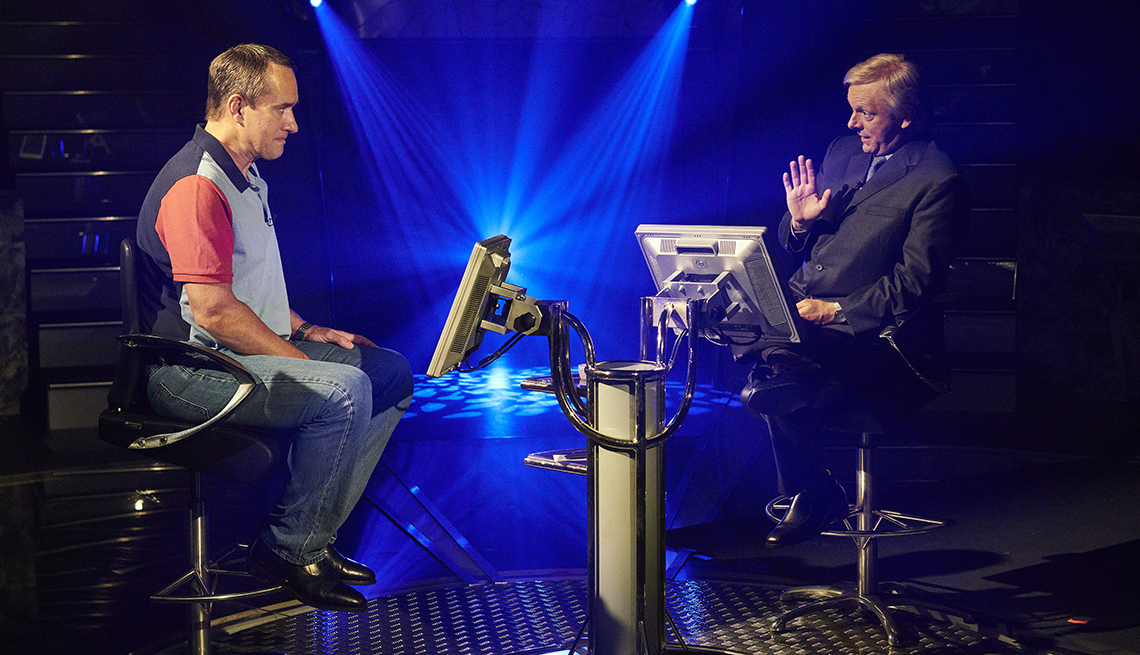 Oscar nominee Stephen Frears (The Queen, The Grifters) presents a three-episode miniseries about a real-life scandal on the original Who Wants to Be a Millionaire show. A millionaire winner (Succession’s Matthew Macfadyen) was accused of cheating with the help of his wife (Fleabag’s Sian Clifford) by using her coughs as a secret code. “The bottom’s falling out of the truth market,” says one character. 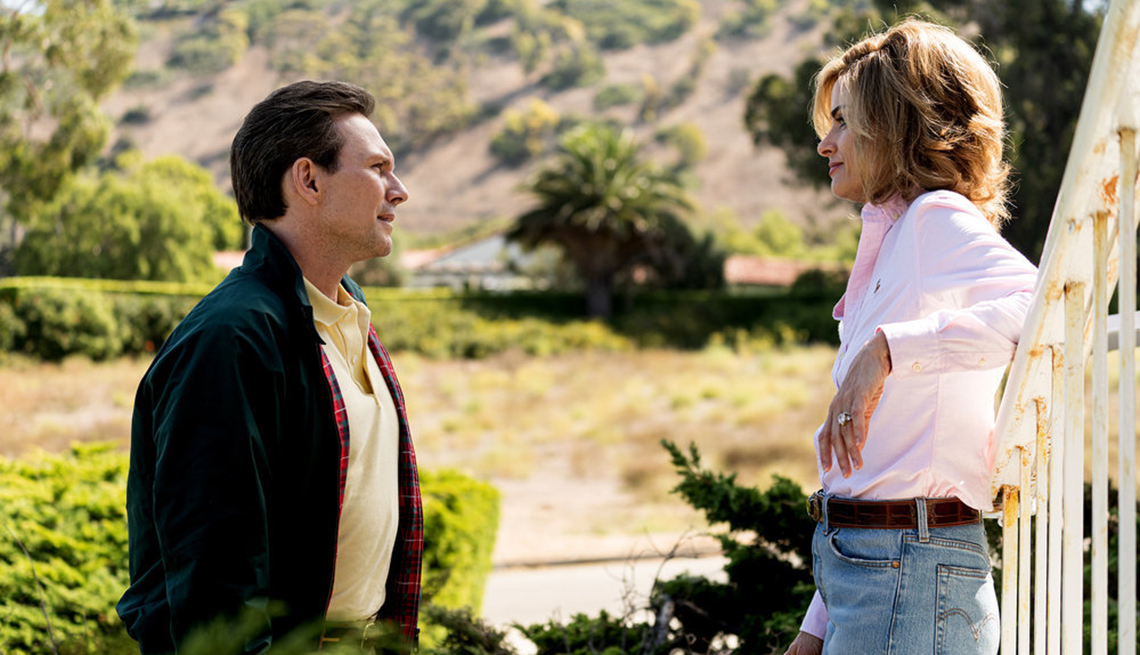 The lurid, fact-based story of a self-sacrificing 1960s wife (Amanda Peet, 48) who put her husband (Christian Slater, 50) through medical and law school, and in the 1980s shot him and his second wife. Meredith Baxter got an Emmy in 1992 for playing Broderick. We’ll see if Peet repeats the feat. 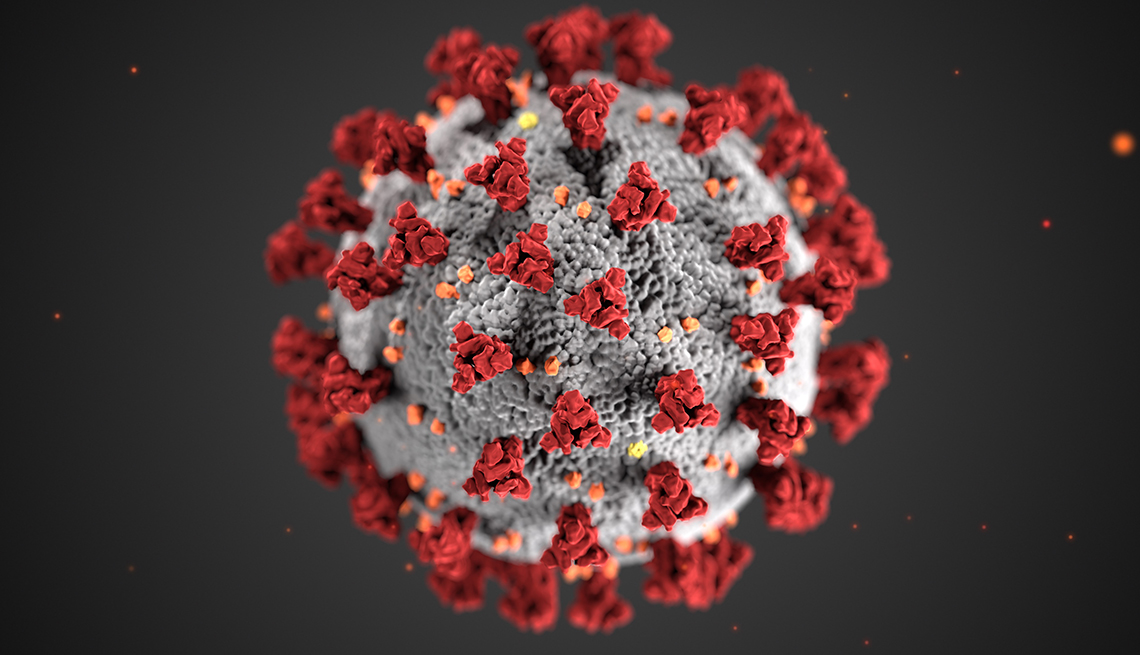 Meet one of the first COVID victims and the scientists racing for a cure.

In a new documentary series, Bill Gates and other sensible experts clarify the coronavirus pandemic, efforts to beat it and ways to manage its mental health impact.

A special investigative report on the COVID-19 pandemic, from the Seattle epicenter to Washington, D.C.

What to Watch Now on Netflix 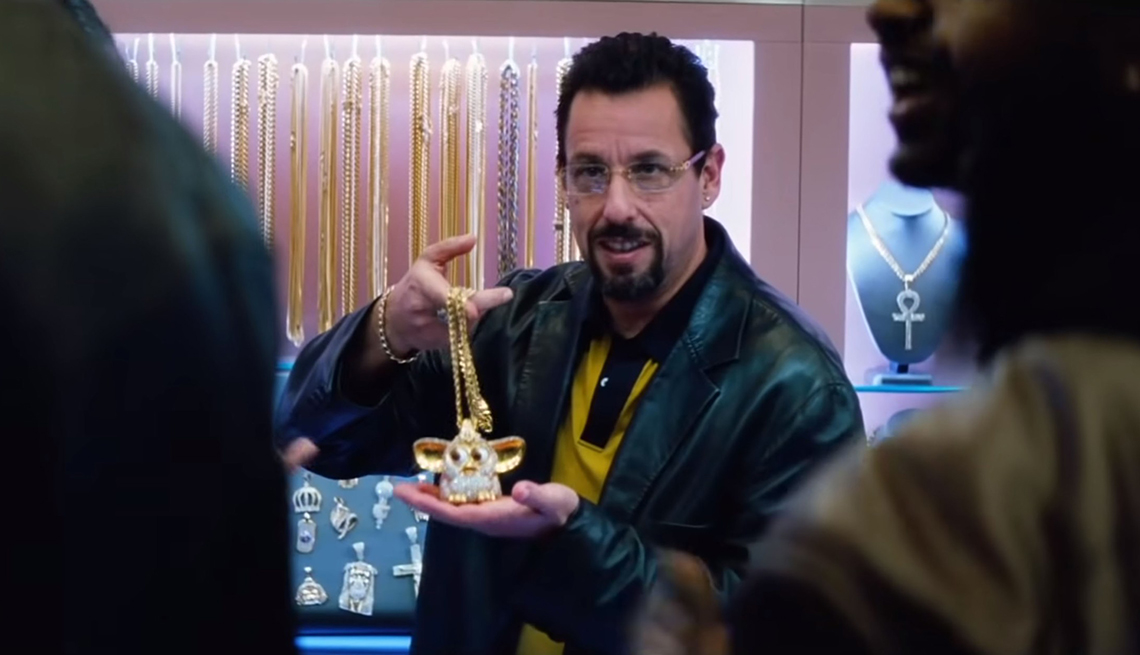 Funnyman Adam Sandler comes of age as a dramatic actor. If comedy auteur Preston Sturges had written the gritty Bad Lieutenant while cribbing from Martin Scorsese’s Mean Streets, it wouldn’t be any better than this irresistible crime caper flick about a gambler with a self-defeating dream.

Now you can binge-watch the latest season of the longest-running prime-time medical drama (more seasons than ER, Scrubs, or M*A*S*H), and all 15 previous seasons, too. And if you like the lively style of Grey’s Anatomy creator Shonda Rhimes, 50, who made Ellen Pompeo and Sandra Oh famous, binge her other Netflix shows, How to Get Away With Murder, Seasons 1 to 5, and Scandal, Seasons 1 to 7.

RELATED: The 16 Best Things Coming to Netflix in May

What to Watch Now on Amazon 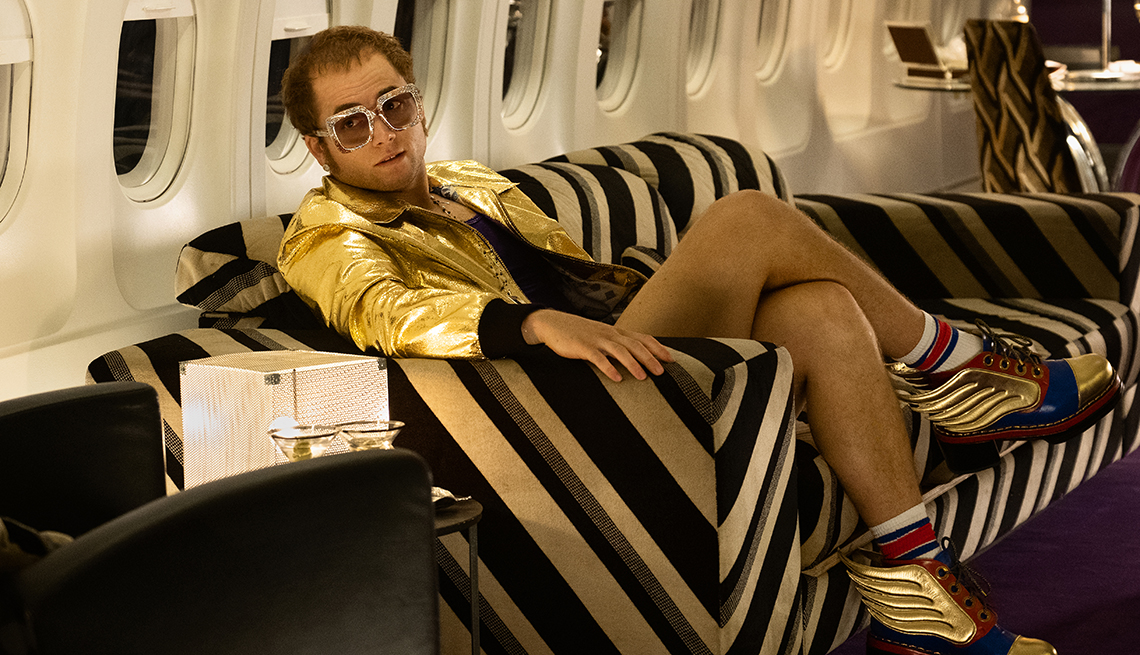 Taron Egerton rocks as Elton John in a rousing jukebox musical movie that tells a fictionalized, fanciful version of his rise from nerd to flamboyant superstar, propelled by his exuberant tunes and exorbitant neuroses.

RELATED: The 18 Best Things Coming to Amazon Prime Video in May

Catch Up on Crime

Need to escape into some classic TV mysteries? Pick a favorite from our 9 Mysteries to Binge Watch Now and solve crimes on Vera, Ripper Street, and Agatha Christie’s Poirot, among others.

Get behind the scenes of the biggest shows on TV right now with interviews with Killing Eve’s Sandra Oh, Mrs. America’s Margo Martindale, Making the Cut’s Tim Gunn, and Top Chef’s Padma Lakshmi.

Some of the coolest characters on TV lately are men of the cloth (Andrew Scott’s hot Priest on Fleabag, Jude Law’s Pius XIII on The New Pope) — but who could be cooler than Mahershala Ali (Green Book)? He plays the spiritual sheikh guiding the hero of Egyptian American comic Ramy Youssef’s semiautobiographical dramedy about finding one’s way amid cultural collisions. Some of the best characters are Ramy’s grownup relatives, especially Hiam Abbass, 59 (Brian Cox’s wife on Succession) as his sheltered mom, who discovers a thrilling new world as a Lyft driver.

For the first time, you can binge-watch all 37 of the BBC’s legendary Shakespeare adaptations. Helen Mirren in A Midsummer Night’s Dream and As You Like It, John Cleese in The Taming of the Shrew, Patrick Stewart in Hamlet, Roger Daltrey in The Comedy of Errors, Judy Davis in The Merry Wives of Windsor? We’re there. Free with a trial subscription (There’s a 7-day free trial, followed by $6.99/month or $69.99/year).

Tom Cruise’s Top Gun sequel got delayed, but a new 4K Ultra HD digital version of the original film (with lots of new interviews) has hit streaming platforms including Amazon and iTunes. (For Blu-Ray fans, the 4K version ships Tuesday.)

RELATED: The Best Tom Cruise Movies of All Time

I Know This Much Is True

If you thought Mark Ruffalo’s transformation into the Incredible Hulk in The Avengers was impressive acting, in this six-episode miniseries based on Wally Lamb’s wildly popular 1998 novel, Ruffalo plays twin brothers. The catch: One of them is schizophrenic and 30 pounds heavier than the other. (Ruffalo, 52, really gained the weight.) The heavy-hitter cast boasts Melissa Leo, 59; Rosie O’Donnell, 58; Archie Panjabi, 47; and Kathryn Hahn.

RELATED: The Dark Story Behind Mark Ruffalo’s Newest Role in I Know This Much Is True

How could the hit about the battle between a kinky U.S. attorney (Paul Giamatti, 52) and his hedge fund manager enemy (Damian Lewis, 49) get better? Add The Good Wife’s Julianna Margulies, 53, as Yale professor Cat Brant, author of The O Gap, a best seller about orgasms, as Giamatti’s pal, as well as House of Cards’ Corey Stoll as Lewis’ new enemy.

In a bizarre story that’s also a true story, Hugh Jackman, 51, is getting some of the best reviews of his career as the superintendent of America’s fourth most-prestigious school district, in Long Island, New York. Everybody’s happy: the kids he gets into Yale, the parents, the millionaire school board president (Ray Romano, 62), the tough-as-nails assistant superintendent (Allison Janney, 60). Only problem: The superintendent and his assistant stole $11 million from the school.

The cantankerous L.A. homicide detective Harry Bosch (Titus Welliver, 58) is back for a sixth season. Stephen King tweeted this week, “There’s nothing better than BOSCH…The story is engrossing, the cast—led my Titus Welliver—is superb, and nobody is phoning it in. One of the best shows now on TV.”

RELATED: Cate Blanchett and Tracey Ullman Hail Mrs. America and Margo Martindale on Success at 68 and Life at Home

Sandra Oh, 48, returns as a woman locked in an unhealthy relationship with a gleeful serial killer.

Downton Abbey creator Julian Fellowes, 70, adapts his best-selling novel about the scandals, secrets and rather grand parties of London’s upper crust on the eve of the Battle of Waterloo. It’s a Dickens (or a Thackeray) of a story.

Liked Broadchurch? David Tennant stars in another ripping mystery — who set the fatal house fire in a spectacular small Scottish Highlands village? It’s a character-driven show by the creator of Grantchester. Acorn TV has a 30-day free offer at signup.acorn.tv (use promo code FREE30).

Tim Gunn, 66, and Heidi Klum (who calls him her “TV husband”), 46, didn’t get to do much together on Project Runway. But they sure do on their new show, on which a dozen designers vie for $1 million and their own Amazon fashion line.

One Day at a Time

Want a soothing escape from bad news? Try Norman Lear’s rebooted classic sitcom, canceled by Netflix but now reborn after an outcry by fans and TV critics, on Pop TV. Justina Machado is great as a single mom and Army vet in L.A. who’s contending with her kids and her Cuban mother (the legendary Rita Moreno, 88).