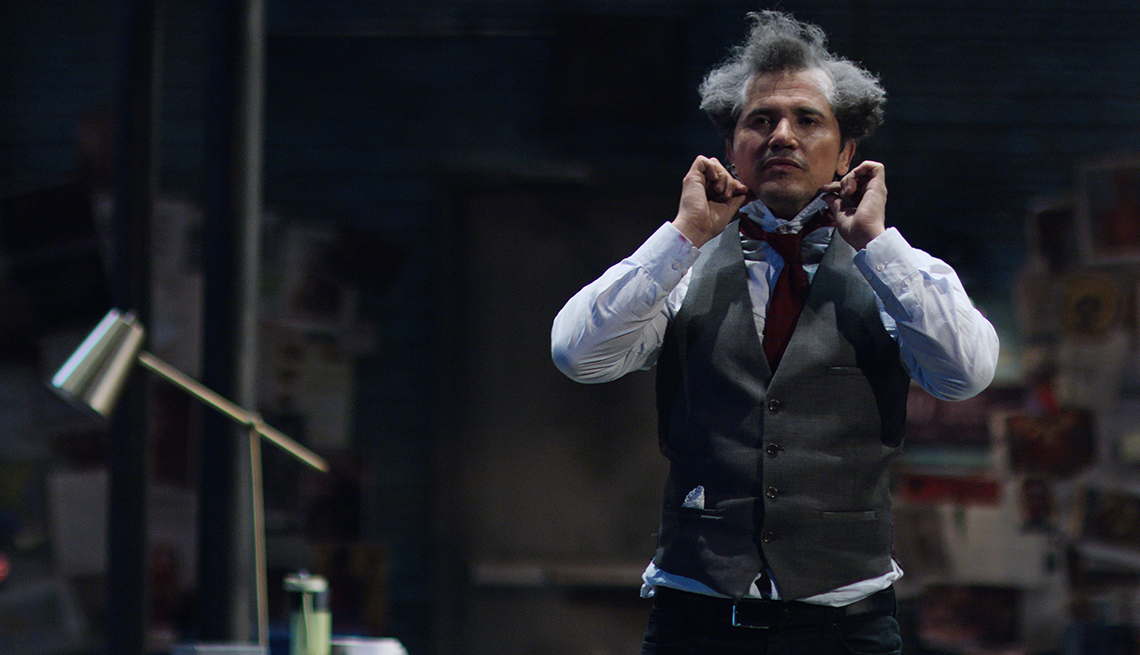 En español | Though his movies have grossed over $2 billion, Emmy and Obie-winning Columbian/Puerto Rican-American actor/playwright John Leguizamo, 54, is more renowned as a one-man stage phenomenon whose specialty is popularizing his people’s culture — and this week his magnum opus, John Leguizamo's Latin History for Morons, hits TV (streaming on Netflix starting Nov. 5). He inspired the work of Lin-Manuel Miranda (Hamilton), who wrote in Vanity Fair, “For our Spanglish generation, Leguizamo was our Man on the Inside,” stealing scenes from Pacino in Carlito’s Way, DiCaprio in Romeo+Juliet, and Ewan McGregor in Moulin Rouge!  and conquering the theater world with partly autobiographical shows that won top awards and aired on HBO: Mambo Mouth, Freak, Spic-O-Rama, Ghetto Klown.

But Leguizamo, who moved to the Bronx ghetto at 4, is also, as he says all Latinos are, “so American it hurts,” and his irresistibly amusing, massively informative, kinetically performative 90-minute monologue play is meant for all audiences. It’s light on its feet (complete with his antic demonstration of all major sexy Latin dance steps) and lighthearted, even when discussing the 95 percent of America’s 73 million residents who died thanks to Columbus and company. Leguizamo does Columbus as a Mafioso, and his 3 million native Caribbean victims as potheads who overlook the colonialist menace as they muse, “Did you ever wonder what the speed of lightning would be if it didn’t” zigzag?

In the show, which zigzags lightning fast, he explains why he wrote it: his son at a fancy school was bullied by racist classmates and soon after got an assignment to write about historical heroes. So Leguizamo paged through his son’s history textbook and found his people nowhere. “I’m looking for Latin heroes, and there’s nothing about us, nada,” he complains, ripping pages out of said textbook and strewing them contemptuously onstage.

So he read some corrective books he recommends (from Howard Zinn’s lefty A People’s History of the United States to Charles C. Mann’s 1491) and spun their revelations into a fact-based, hero-worshipping, fanciful sprint through 3,000 years of Latin history. Did you know Spain’s King Philip II put his New World subjects in a human zoo after stealing 1.5 million tons of their gold and silver, which also financed the British, French and Ottoman empires? That conquistadors in Aztec country were like “NBA players at a Kardashian pool party?” That Latinos are America’s most-bullied and most-incarcerated ethnic group, with the highest high-school-dropout rate — and also our most-decorated minority, fighting in every American war? Who contributed the first Navy Admiral (Farragut) and the cross-dressing Cuban Confederate Army lieutenant Loreta Velázquez, plus “tomatoes, potatoes, chocolate — try living without that s—t, man — hammocks, canoes, chili peppers, tobacco, anesthesia, brain surgery and hockey?” And got in return “typhus, cholera, malaria, measles, the common cold, diphtheria, chicken pox, whooping cough, leprosy, and don’t forget, rats, roaches and pigeons?”

Nuanced this is not, and he won't win the Bancroft Prize for American History (though Latin History for Morons was nominated for the Tony Award for Best Play and Leguizamo and Bruce Springsteen were the only winners of the 2018 Special Tony Awards). His jibes at Trump and his caricatures of cultural stereotypes will peeve partisans on both sides of the political aisle, though he mainly leans left. But it’s certainly the least boring chalk talk in the history of U.S. history classes, and it makes even non-Latinos feel pride in America. And feel like morons for not knowing all this stuff before.