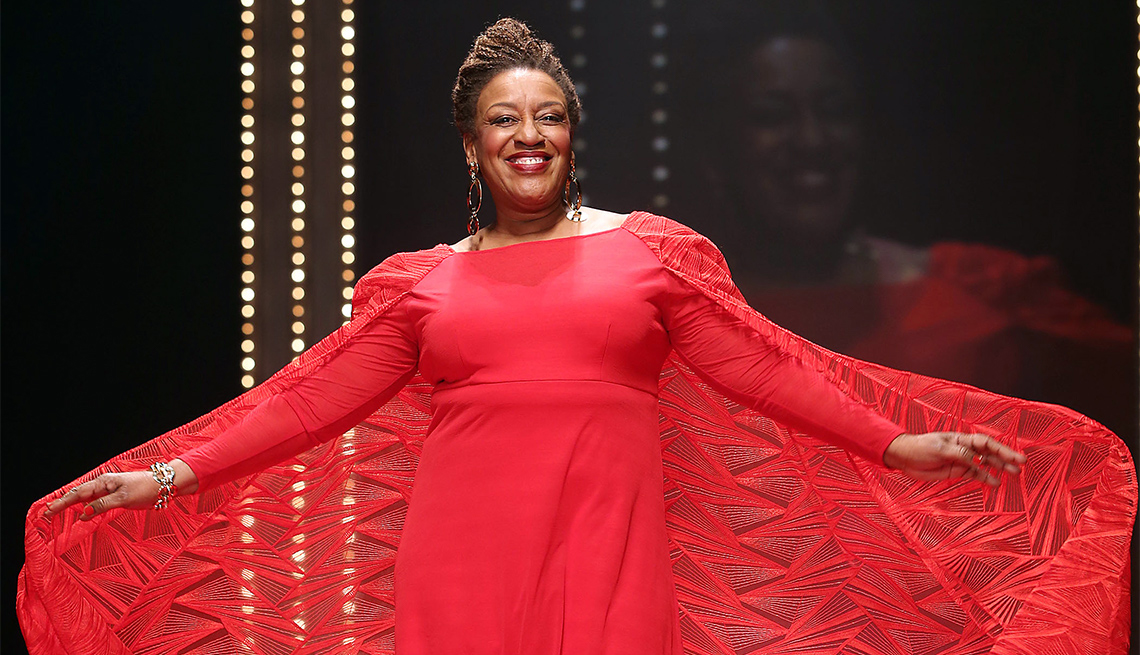 “I don’t know what it is about the timbre of my voice,” says Guyanese-born, British-raised Carol Christine Hilaria Pounder, known as CCH Pounder. “But it obviously hits the note that makes people go, ‘Sit up straight and behave!’”

Pounder, 65, has used that distinctive intonation to immense advantage throughout her distinguished career, most recently as Harvard-educated coroner Loretta Wade on NCIS: New Orleans, broadcast TV’s No. 1 show among viewers over 65 (Tuesdays at 10 p.m./9 p.m. CT on CBS).

While explaining cadaver clues to NCIS investigators such as Scott Bakula, 63, she can flash the most withering, sardonic gaze this side of Allison Janney (to whom she lost a career-making role on The West Wing, settling instead for the HUD secretary part). She’s been a familiar, often rather smart and judgmental character in four Emmy-nominated roles (on The X-Files, ER, The Shield and The No. 1 Ladies’ Detective Agency). You’ve also seen her be intimidating on Law & Order: SVU, L.A. Law and Sons of Anarchy. And this December she’ll reprise her role as Mo’at in the sequel to Hollywood’s all-time No. 1 hit, Avatar.

In her youth, she was cast older, making aging on-screen a breeze. “When you play people in their 40s in your 20s, by the time you get to 65, it’s like, ‘Man, I played that when I was 35!’ It just takes less makeup to make me look the way I do now. Before, makeup applied those lines. Now it's like, ‘OK, just pat her down and send her on her way.’ ” The keys to her success are that resonant voice (heard on the audiobook Grow Old Along With Me: The Best Is Yet to Be, which lost the Grammy to Hillary Clinton’s It Takes a Village in 1997) and a theater-trained work ethic. “I never stopped learning,” she says.

To get where she is, Pounder had to learn screen acting fast, and also discretion. She bit her tongue while shooting the 1985 film classic Prizzi’s Honor. “I was very critical as a youngster, just shocked at the incredible amount of wasted time and people indulging,” she recalls. “I came from the theater, and I thought, ‘This behavior is preposterous!’ I was quiet and kept my nose down, for good reason.”

Since nobody cared what she thought, she charted a career course to make them care. Spurning a recurring X-Files role, she lofted her movie profile as Lt. Victoria Hendrix in 1993’s Sliver, where she perfected the persona that has made her famous — because in 2002, the producers of The Shield became her first colleagues who ever welcomed her input, on the similar cop character Claudette Wyms, the bad-cop protagonist’s nemesis. “Sliver was the beginning of Claudette, and then it just sort of blossomed as the years went by. You got more things to do, more to expand your character.” 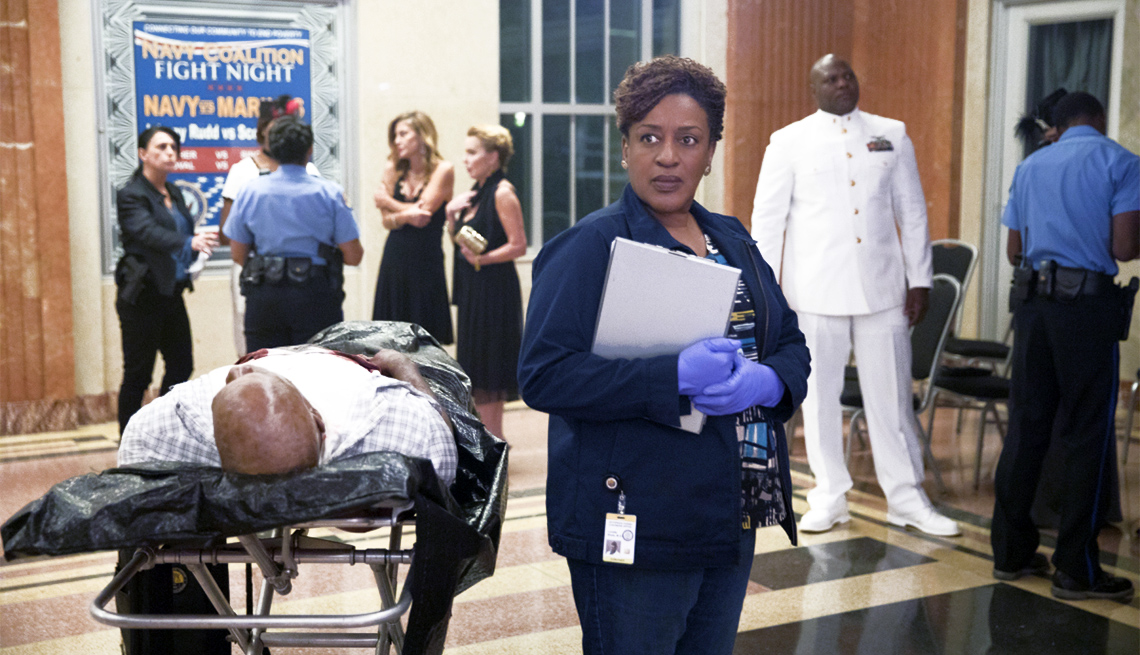 Her role as the Big Easy’s counterpart to original NCIS coroner David McCallum (a former man from U.N.C.L.E.) on NCIS: New Orleans gave her a chance for character expansion, but she almost turned it down. “I’ll be honest. I just didn’t think that CBS could sustain yet another NCIS,” she says. And there was another problem: Black actors can get sidelined even when playing top cops or presidents because the roles are often generic and not fully rounded characters. And that can spell trouble on a police procedural, which tends to value plot over character exploration. “We play a person in authority, but with no relations, no daughter, no husband, no nothing. Just a judge or a policeman sitting behind a desk,” Pounder says, of fellow black actors. "Give them a family member, give them a flaw, give them something else to create the humanness of the character! So we've gotten to that place where now that is not the issue.”

As Wade on NCIS: New Orleans, Pounder gets to have friends like Sebastian (Rob Kerkovich), a lab assistant who hurts her by taking a gun-packing agent’s job, and a reformist mayoral candidate (Amanda Warren of Three Billboards Outside Ebbing, Missouri), plus gets to experience deep family issues. “Later on in life, she adopts two young men and pulls them out of the foster care system, and suddenly is a parent. There’s no history of her having a husband. I don’t know if that'll show up later. But she has those children to deal with,” Pounder says.

Pounder also infuses Wade with some Santa Fe-style spirituality and the joie de vivre she observed in the real New Orleans coroners who let her observe 23 autopsies. “Waiting for the ambulance, stacking the bodies what looks like half a mile high. They have a strange sense of joy and appreciation of life, I guess, because they're very aware of the alternative. It's pretty impressive.” The city itself — her new home — plays a vivid role, too. When a big brass marching band walks into the shot or the actors get pelted with Mardi Gras beads (always a risk in the town that invented jazz), it doesn’t spoil the scene. It gives the police procedural a jolt of real life.

It looks like Pounder will be a fixture for some time on NCIS, and also as a resident of New Orleans, where an exhibition of her art collection runs through Feb. 26. (She also founded a gallery in Los Angeles and the first contemporary art gallery ever in Dakar, Senegal, where her late husband was from.) "Since I moved here for this show, everyone wants to visit me," she says. And who knows how many Avatar sequels director James Cameron will need Mo'at for. This year’s Avatar 2 is set way later than the first one. “It’s 50 years after our first contact with humans. We obviously live a lot longer as Na'vi [the film’s aliens] — we have a different life span.”

So that means a baby in the first Avatar would be an AARP member in the sequel. Did they learn much in the interim? Did Pounder learn anything in the 39 years since her first small part, a nurse in All That Jazz? “The one thing I’ve learned sticking around this long is that your life is going be much longer than you think, and it will go much faster than you think. That’s the shock of it all — how could I possibly have arrived at this age? There wasn’t any time! Time whizzed by. So OK, maybe God did pull it off in seven days. This life is a real quickie we’re doing, man.”